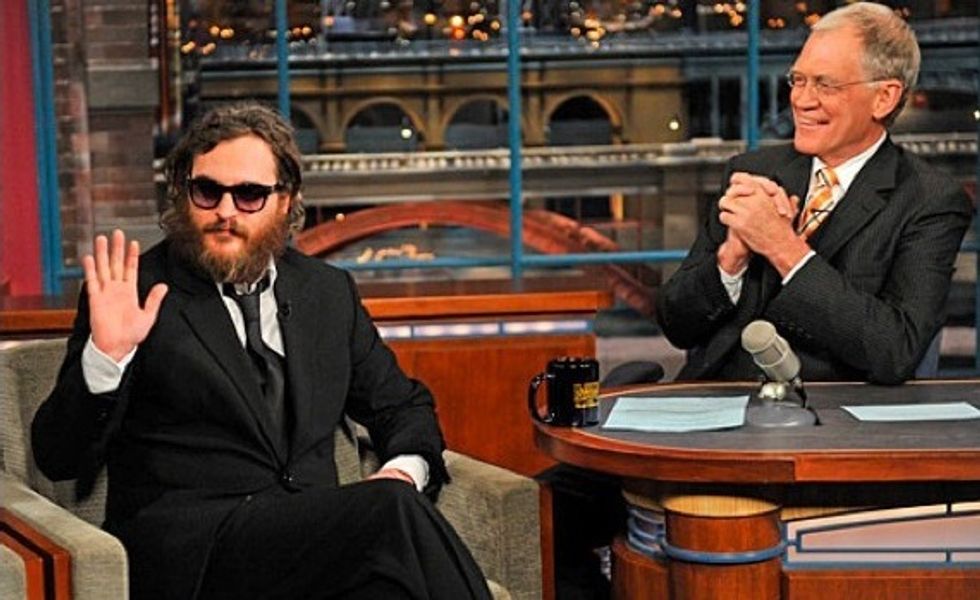 1. I'm Still Here
Where: Embarcadero Center Cinema, 1 Embarcadero Ctr., 415-352-0835
When: All Week
Why: Ever wonder what happened to Joaquin Phoenix, the talented star of Gladiator and Walk the Line, who abruptly ended his acting career to become a hip-hop wannabe? So did we. Casey Affleck's new documentary, boasting the production values of a glorified home movie, captures Phoenix's fall from grace with depressing precision. Is it an elaborate hoax? Maybe. Whatever the case, I'm Still Here keeps us guessing.

2. The Bridge on the River Kwai
Where:Castro Theatre, 429 Castro St., 415-621-6120
When: Sept. 10-16
Why: David Lean's 1957 World War II drama, a Best Picture-winning portrait of a single-minded colonel (Alec Guinness) leading a group of British war prisoners to build a bridge across the Kwai, returns to the big screen in stylish fashion, with a handsome new print digitally restored from the original negatives.

3. Get Low
Where:Opera Plaza Cinema, 601 Van Ness Ave., 415-771-0183
When: All Week
Why: Robert Duvall brings characteristic gravity and a gruff sense of humor to Felix Bush, a backwoods recluse who plans and presides over his own funeral, in Low. Feared by neighbors he keeps at a distance, Bush is rumored to be a killer, but cash-starved funeral director Frank Quinn, played by the always droll Bill Murray, is happy to take his money. Both actors deliver Oscar-worthy performances here, in Aaron Schneider's quietly effective feature debut.

4. The Karate Kid
Where:Red Vic Movie House, 1727 Haight St., 415-668-3994
When: Sept. 12-13
Why: Does Harald Zwart's remake, starring Jackie Chan and Jaden Smith in the roles made famous by Noriyuki "Pat" Morita and Ralph Macchio, surpass John Alvidsen's 1984 original in any way? Not really. But it's a handsome film that makes the most of its picturesque locations, highlighted by a climactic kung-fu competition that stands as a triumph of artful choreography.

5. Cairo Time
Where:Embarcadero Center Cinema, 1 Embarcadero Ctr., 415-352-0835
When: All Week
Why: Winner of the Best Canadian Feature Film award at last year's Toronto Film Festival, Ruba Nadda's bittersweet romance stars Patricia Clarkson, excellent as a magazine editor who falls for a retired Egyptian police officer (Alexander Siddig, of Syriana) during an unexpected stay in Cairo. Complicating matters is her marriage to another man.

6. The American
Where: Balboa Theater, 3630 Balboa St., 415-221-8184
When: All Week
Why: Not much happens in Anton Corbijn’s loose, leisurely paced adaptation of Martin Booth’s 1991 novel A Very Private Gentleman. And yet his narrative rarely wants for momentum. Rowan Joffe’s screenplay, a tribute to understatement, keeps us guessing. So too does George Clooney, less cocksure here than he is enigmatic as an emotionally undernourished assassin type struggling to forge a life removed from his work.

7. Cyrus
Where:Red Vic Movie House, 1727 Haight St., 415-668-3994
When: Sept. 14-16
Why: The performances of John C. Reilly, Jonah Hill and Marisa Tomei feel as intimate as everything else in the delightfully unsettling new comedy Cyrus, perhaps because directors Mark and Jay Duplass entrusted their actors to speak in their own voices – the dialogue is almost entirely improvised. It’s a choice that has served the Duplass brothers well in past productions, and here, with a gifted, exceptionally observant cast, it works again.