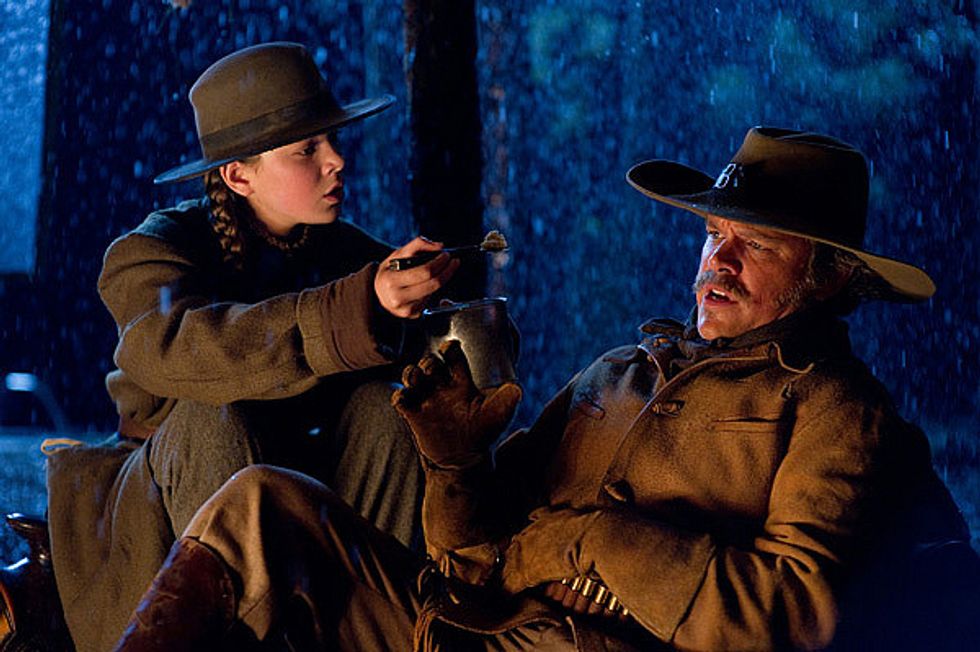 'Twas the day before Christmas, and all through the flat, not a creature was stirring... except for me (with my mom's cat), hastily posting this week's Theater Roundup before returning to wrapping presents, re-watching some of the year's best movies (currently playing: The Tillman Story) and sipping on low-fat egg nog. Happy holidays!

1. True Grit
Where: Sundance Kabuki Cinemas, 1881 Post St., 415-929-4650
When: All Week
Why: Those probing Joel and Ethan Coen's latest offering for some deeper meaning, perhaps something in the vein of the poetic nihilism of 2007’s No Country for Old Men, might be disappointed. True Grit is neither a deconstruction nor a reinvention of the Western; it is, rather, a worthy addition to a venerable genre – a classic adventure, a road movie set in the roadless countryside, as much a black comedy as a sly meditation on violence.

2. Animal Kingdom
Where:Opera Plaza Cinema, 601 Van Ness Ave., 415-771-0183
When: All Week
Why: Families don't come more dysfunctional than the Codys, whose reunions always seem to spark a crime wave. When a rogue cop murders a member of their close-knit but combustible clan, 17-year-old Josh (newcomer James Frecheville)is drawn into the thick of a revenge plot that forces him to choose between the vipers in his midst and the possibility of a future. Overlooked at the time of its August release, Australian director David Michôd's blunt-force drama is also one of the year's most harrowing.

3. The Dark Crystal
Where:Red Vic Movie House, 1727 Haight St., 415-668-3994
When: Dec. 27-28
Why: A dramatic departure from sunnier, all-ages-appropriate fare like The Muppets Take Manhattan, Jim Henson’s Tolkien-esque fantasy (made with frequent collaborator Frank Oz) still stands as his darkest and most ambitious achievement. Crystal, which took a dedicated army of artists, acrobats and puppeteers roughly five years to make, turns 29 in 2011. Those inclined to celebrate early should find kindred spirits this week at the Red Vic.

4. Sita Sings the Blues
Where:Red Vic Movie House, 1727 Haight St., 415-668-3994
When: Dec. 26
Why: Alternative cartoonist and onetime San Francisco resident Nina Paley is officially on a roll. Following the abrupt dissolution of her marriage – her ex ended it via e-mail – she began exorcizing her frustrations through a series of animated shorts inspired by the Indian tale of Ramayana and set to the vocals of 1920s jazz legend Annette Hanshaw. Now comes the feature-length fruit of her labors – Sita Sings the Blues, a profoundly personal work of visual brilliance.

5. TRON: Legacy
Where:Castro Theatre, 429 Castro St., 415-621-6120
When: All Week
Why: The 1982 original, so prophetic in its fascination with the computer generation, would seem an obvious choice for a follow-up, and perhaps there is no better time than now, when technology has almost caught up with the vivid imaginations of creators Steven Lisberger and Bonnie MacBird. Nearly three decades later, Legacy is a marvelous spectacle and a worthy sequel – sometimes convoluted but hard to resist, its sense of wonder dazzles. Flynn lives, and we’re grateful for it.

6. The King's Speech
Where: Embarcadero Center Cinema, 1 Embarcadero Ctr., 415-352-0835
When: All Week
Why: Colin Firth (A Single Man) should land himself at the forefrunt of a second consecutive Academy Award race with his funny, moving and linguistically challenging performance as Bertie, the tongue-tied son of King George V whose ascent to the throne is complicated by his stammer. Enter Lionel Logue (Geoffrey Rush, also Oscar-bound), an unconventional speech therapist who pushes Bertie to realize his potential and becomes his best friend in the process.

7. 127 Hours
Where: Embarcadero Center Cinema, 1 Embarcadero Ctr., 415-352-0835
When: All Week
Why: In 2003, a boulder pinned mountain climber Aron Ralston to the wall of Utah's Blue John Canyon for nearly five days, forcing him to amputate his right arm in a desperate bid to survive. In adapting his bestselling 2004 memoir to the screen, Slumdog Millionaire'sDanny Boyle deftly navigates the obvious stumbling blocks, transforming a mostly one-man show with a well-publicized conclusion into arresting, often transcendent drama that speaks not only to Ralston's will but also to the durability of the human spirit.