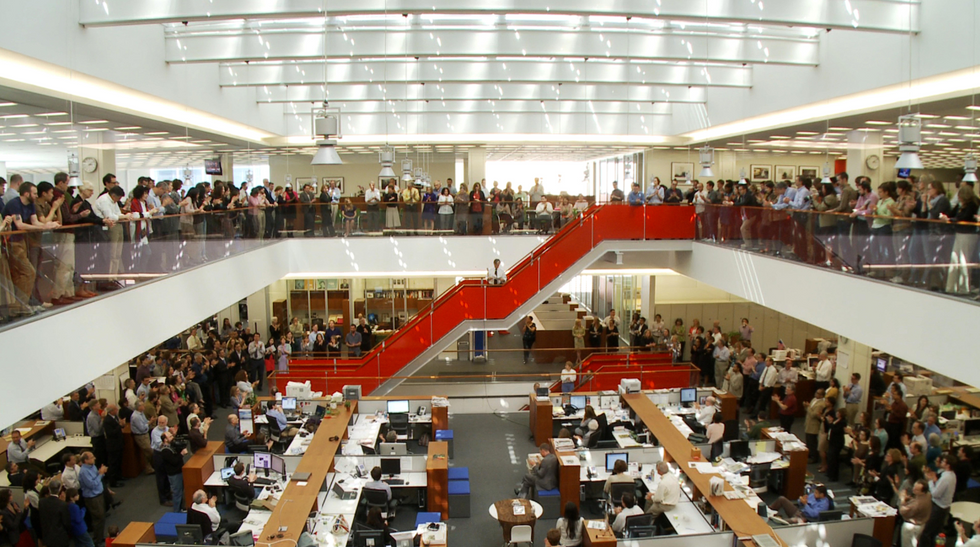 Looking to take refuge from the weekend traffic in the air-conditioned confines of a darkened theater? Check out the best of this summer's indie fare – including Bride Flight, Twin Sisters director Ben Sombogaart's award-winning epic romance – now playing at San Francisco's venerable arthouse cinemas, and enjoy your Fourth of July safely, merrily and with a hefty helping of holiday BBQ.

1. Page One: Inside the New York Times
Where:Bridge Theatre, 3010 Geary Blvd., 415-751-3213
When: All Week
Why:Page One delivers unprecedented access to the Gray Lady's newsroom at a time when the Internet, having surpassed print as our main news source, is accelerating the decline of newspapers across the nation and fundamentally transforming the media landscape. Writers, including Tim Arango and David Carr, track the industry's metamorphosis even as their own paper struggles to stay solvent, in an illuminating portrait of journalists struggling to produce extraordinary work under difficult circumstances.

3. Buck
Where: Embarcadero Center Cinema, 1 Embarcadero Ctr., 415-352-0835
When: All Week
Why: "Your horse is a mirror to your soul, and sometimes you may not like what you see. Sometimes, you will." So says Buck Brannaman, an American cowboy who travels the country for nine months a year helping horses with people problems. Buck, Cindy Meehl's richly textured documentary about an ordinary man who's overcome tremendous odds to lead an extraordinary life, follows Brannaman from his troubled childhood to his successful career as a real-life "horse whisperer."

4. The Trip
Where: Clay Theatre, 2261 Fillmore St., 415-346-1124
When: All Week
Why: When Steve Coogan is invited to tour the finest restaurants in England's Lake District, he envisions a perfect getaway with his girlfriend (Margo Stilley). When she backs out, he has no one to accompany him but his best friend and source of eternal aggravation, Rob Brydon. As the comic duo drive each other mad with constant competitions and dueling impressions of Michael Caine, Sean Connery and Al Pacino, they arrive at unexpected realizations about food, the nature of fame and their own lives.

5. Conan O'Brien Can't Stop
Where: Lumiere Theatre, 1572 California St., 415-885-3201
When: All Week
Why: Conan O'Brien Can’t Stop is a snapshot of a performer on the rebound, taken at a very specific, precarious moment. It’s not always funny – director Rodman Flender (Leprechaun 2) highlights the former Tonight Show host’s musical excursions more than his comedy – and it’s not always pretty, but for the Coco-nuts of the world, it’s at least more intimate and honest than anything they’re likely to find on basic cable.

6. 13 Assassins
Where: Opera Plaza Cinema, 601 Van Ness Ave., 415-771-0183
When: All Week
Why: Takashi Miike's story of 13 samurai-for-hire assembled to murder a sadistic young lord is invigorated by the irrepressible charisma of star Koji Yakusho (Babel) and the director's hypnotic, unrelenting pacing. Yet Assassins is most unforgettable for the sheer audacity of Miike's vision: The film, which recalls Kurosawa at his most grandiose, is a dazzling spectacle, highlighted by a climactic 45-minute showdown that somehow leaves us panting for more.

7. Trollhunter
Where: Lumiere Theatre, 1572 California St., 415-885-3201
When: All Week
Why: The title says all you need to know: Armed with a video camera and some seriously misguided chutzpah, a trio of college students set outs to discover the truth about trolls – the supposedly mythical monsters who inhabit the Norwegian woods, not Rotten Tomatoes critics like Armond White. What they find, with the help of a cryptic “poacher” (Otto Jespersen), are creatures as fearsome as they are laughably difficult to hunt.