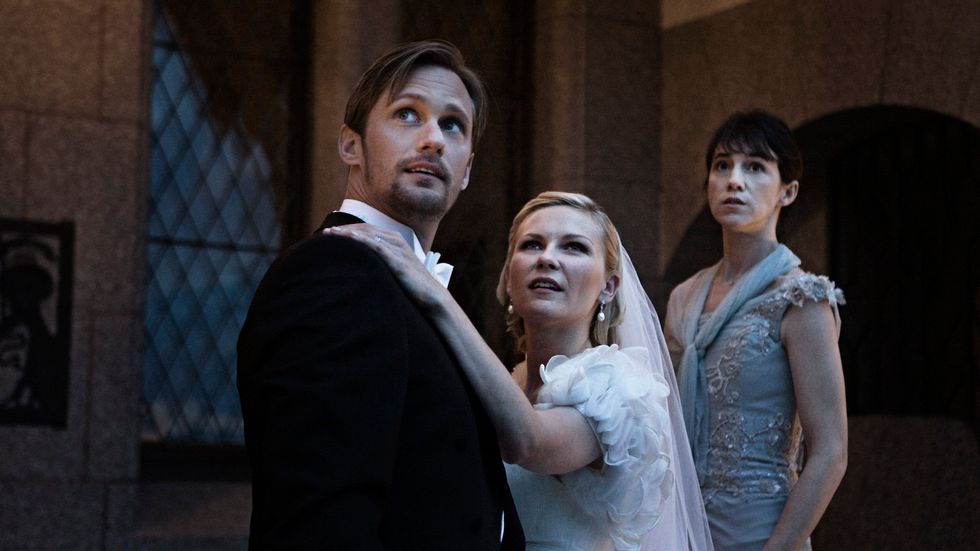 1.Melancholia
Where: Embarcadero Center Cinema, 1 Embarcadero Ctr., 415-352-0835
When: All Week
Why:Lars von Trier’s latest sounds like an experiment in self-parody for the Danish director, who, after wallowing in the unrelenting despair of Dancer in the Dark and Breaking the Waves, has exhausted all his options save one: obliterating earth altogether. Yet Melancholia, powered by Kirsten Dunst’s startling, career-best performance as a disaffected bride-to-be who welcomes the world’s end, is never so sentimental as to seem mawkish. More invigorating as a spectacle than a story, von Trier’s melodrama is crisp, engaging, even darkly comical, just never quite transcendent enough.

2. Steve Jobs: The Lost Interview
Where: Opera Plaza Cinema, 601 Van Ness Ave., 415-771-0183
When: Nov. 16-17
Why: In 1995, tech journalist Mark Stephens (a.k.a. Bob Cringely) interviewed Steve Jobs, who, ten years prior, had left Apple following a brutal power struggle with John Sculley, the CEO he'd brought into the company. During the interview, which arrives on the big screen in its entirety for two nights this November, Jobs talks about his pioneering days with Steve Wozniak, and how they assembled the first Apple computer. Jobs recalls visits he made to Xerox Palo Alto Research Center and how it inspired the creation of the Macintosh, the world's first modern PC. Finally, he offers his vision of a digital future – a world of wonderful, groundbreaking products created by artists and poets.

3.Into the Abyss
Where: Embarcadero Center Cinema, 1 Embarcadero Ctr., 415-352-0835
When: All Week
Why:Werner Herzog doesn’t shy away from the gruesome fact of Into the Abyss, about a triple homicide committed by two Texas teenagers – one of whom was executed nine years later for the crime – or the heartbreak they left behind. He has made moving documentaries before, among them Grizzly Man (2005) and last spring’s Cave of Forgotten Dreams. Abyss ranks with his best. This is vital, mesmerizing cinema, unequivocal in its denunciation of all kinds of murder.

4. Flash Gordon
Where:Castro Theatre, 429 Castro St., 415-621-6120
When: Nov. 13
Why: Playing as the first leg of a Sunday double-feature with David Lynch's Dune, Gordon (restored here to its original widescreen glory) is a triumph of outlandish costumes, silly dialogue and phony-looking special effects. As in Frederick Stephani's 1936 adaptation, Alex Raymond's comic-strip hero (Sam J. Jones) rescues the world from an evil emperor (Max von Sydow) scouring the universe for planets to pulverize. This 1980 update retains an appreciably campy charm, but it's best remembered for Queen's bombastic score.

5.Revenge of the Electric Car
Where: Lumiere Theatre, 1572 California St., 415-885-3201
When: All Week
Why:In 2006, thousands of new electric cars were deliberately destroyed by their manufacturers. Today, less than five years later, the electric car is back with a vengeance. In Revenge, Who Killed the Electric Car? director Chris Paine takes his crew behind the closed doors of Nissan, GM and the Silicon Valley start-up Tesla Motors to chronicle the story of the global resurgence of electric cars. Without using a single drop of foreign oil, this new generation of car is America's future: fast, furious and cleaner than ever.

6.50/50
Where: Bridge Theatre, 3010 Geary Blvd., 415-751-3213
When: All Week
Why:How impressive is 50/50, a movie that could easily have wallowed in the weepiest clichés, but foregoes them for something subtler and more honest. Here, improbably, we have a comedy about a young man, fit and fastidiously health-conscious, floored by a cancer diagnosis and faced with even odds to survive. That the movie resists going maudlin is a testament to star Joseph Gordon-Levitt’s ability to invite sympathy without begging for it, as well as Will Reiser’s screenplay, which is tender in all the right places.

7.Drive
Where: Bridge Theatre, 3010 Geary Blvd., 415-751-3213
When: All Week
Why:In Drive, Ryan Gosling remains preternaturally calm even as he stomps a mobster’s flunky to a bloody pulp. Rarely does his voice rise above a whisper. He’s not an obvious choice to follow in Steve McQueen’s footsteps, perhaps because he, like his character, seems too cerebral to accept the brutishness the job requires. Yet Gosling, meticulously calculating in the few words he lets slip, is the perfect complement to director Nicolas Winding Refn’s seductive pulp fiction, in which the best-laid plans invariably unravel and the only way to survive the world is to embrace its darkness.