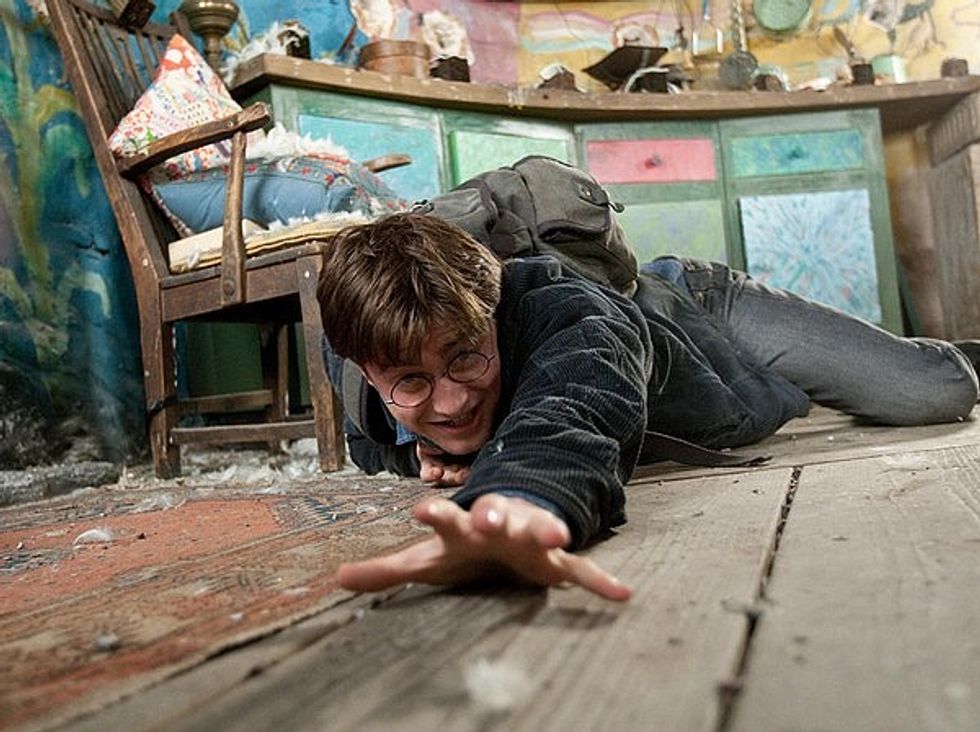 Martin Scorsese'sPublic Speaking, a revealing portrait of Fran Lebowitz in which the outspoken author and social critic shares her thoughts on gender, celebrity culture, gay rights, smoking bans and strollers, continues its run through Thanksgiving at the Roxie Theater. Elsewhere:

1. The Harry Potter Marathon
Where:Castro Theatre, 429 Castro St., 415-621-6120
When: Nov. 19-20
Why: How far J.K. Rowling's magical hero has come, from his movie debut in The Sorcerer’s Stone (2001), which captured none of the subtlety or rich characterizations of the author’s addictive prose, to David Yates’ The Deathly Hallows: Part 2, a graceful swan song that witnesses the the Boy Who Lived's ascent to manhood. Equally pleasing has been watching Daniel Radcliffe, Emma Watson and Rupert Grint – all in their preteens when the series started – grow up on screen, maturing into performers capable of the nuanced portrayals Rowling’s story demands. If you're in the mood to reminisce, head to the Castro this weekend for the theater's two-day Potter marathon, where you can catch all eight adventures for just $24.

3. Vicky Cristina Barcelona
Where:Castro Theatre, 429 Castro St., 415-621-6120
When: Nov. 23
Why: The disparity between Woody Allen’s recent meditations on murder (Match Point, Cassandra’s Dream) and his seemingly weightless farces (Anything Else, Scoop) has led some to suggest that he dispense with comedy altogether. This year's Midnight in Paris silenced those critics, but before that came Vicky Cristina (2008), a comedy of refreshing depth that finds the filmmaker invigorated by the picturesque backdrop of the Mediterranean coast and a sublime cast led by Javier Bardem (No Country for Old Men) as a preternaturally confident Don Juan.

4.Melancholia
Where: Embarcadero Center Cinema, 1 Embarcadero Ctr., 415-352-0835
When: All Week
Why:Lars von Trier’s latest sounds like an experiment in self-parody for the Danish director, who, after wallowing in the unrelenting despair of Dancer in the Dark and Breaking the Waves, has exhausted all his options save one: obliterating earth altogether. Yet Melancholia, powered by Kirsten Dunst’s startling, career-best performance as a disaffected bride-to-be who welcomes the world’s end, is never so sentimental as to seem mawkish. More invigorating as a spectacle than a story, von Trier’s melodrama is crisp, engaging, even darkly comical, just never quite transcendent enough.

5.Into the Abyss
Where: Embarcadero Center Cinema, 1 Embarcadero Ctr., 415-352-0835
When: All Week
Why:Werner Herzog doesn’t shy away from the gruesome fact of Into the Abyss, about a triple homicide committed by two Texas teenagers – one of whom was executed nine years later for the crime – or the heartbreak they left behind. He has made moving documentaries before, among them Grizzly Man (2005) and last spring’s Cave of Forgotten Dreams. Abyss ranks with his best. This is vital, mesmerizing cinema, unequivocal in its denunciation of all kinds of murder.

6. Steve Jobs: The Lost Interview
Where: Opera Plaza Cinema, 601 Van Ness Ave., 415-771-0183
When: All Week
Why: In 1995, tech journalist Mark Stephens interviewed Steve Jobs, who, 10 years prior, had left Apple following a brutal power struggle with John Sculley, the CEO he'd brought into the company. During the newly rereleased interview, Jobs talks about his pioneering days with Steve Wozniak, and how they assembled the first Apple computer. Jobs recalls visits he made to Xerox Palo Alto Research Center and how it inspired the creation of the Macintosh, the world's first modern PC. Finally, he offers his vision of a digital future – a world of wonderful, groundbreaking products created by artists and poets.

7.Drive
Where: Lumiere Theatre, 1572 California St., 415-885-3201
When: All Week
Why:In Drive, Ryan Gosling remains preternaturally calm even as he stomps a mobster’s flunky to a bloody pulp. Rarely does his voice rise above a whisper. He’s not an obvious choice to follow in Steve McQueen’s footsteps, perhaps because he, like his character, seems too cerebral to accept the brutishness the job requires. Yet Gosling, meticulously calculating in the few words he lets slip, is the perfect complement to director Nicolas Winding Refn’s seductive pulp fiction, in which the best-laid plans invariably unravel and the only way to survive the world is to embrace its darkness.