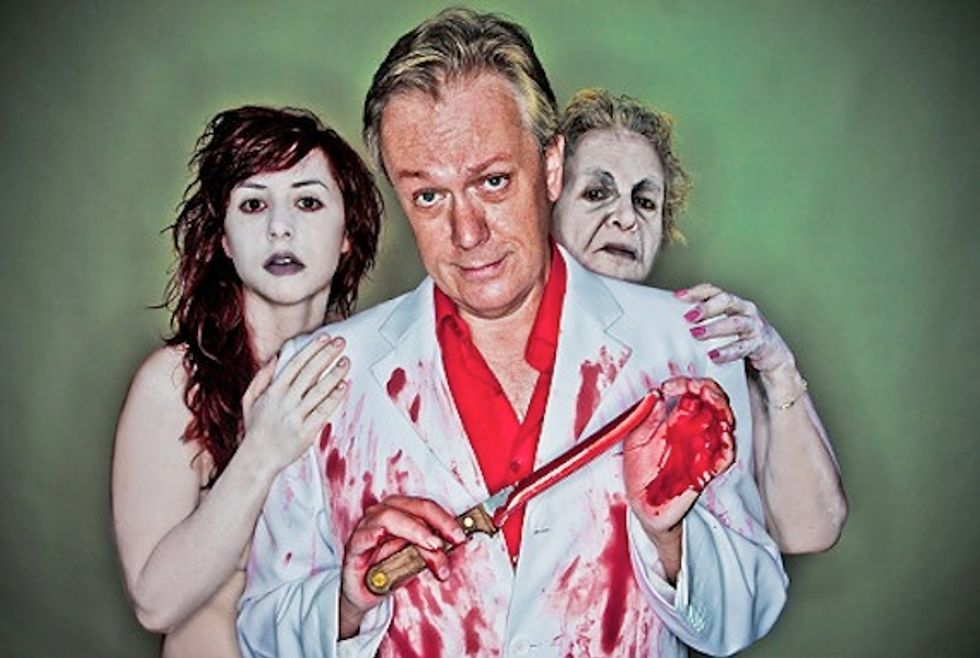 As someone who spends a good part of the year either working, attending, or poring over film festival catalogues, I infrequently run into a movie I haven't heard of, or I don't know at least a little bit about. As such, I look forward to IndieFest's yearly blood-splattered grindhouse fiesta, Another Hole in the Head. This year the fest smartly expands beyond the Roxie to three other venues, The Victoria Theatre, Terra Gallery downtown and the underground genre paradise The Vortex Room. Here are some of the most intriguing underground flicks splashing the screen at this year's edition.

Zero Killed
The macabre closing night film of this year's HoleHead is, by technical description, a documentary–and not of the Tobe Hooper variety either. Pairing staged footage of homicidal fantasies told to him by interviewees (on the condition that they act in them as either as the murderer or victim) with years-later decompressions on subjects like torture, the military, and media dominance, German director Michal Kosakowski's film plays out like a grim riff on Michael Apted's Up series. Ranging from absurd bloodbaths to chilling snuff films, the most effective vignettes play out in stark counterpoint to the interviews, adding a heightened meaning to the necessarily political talk on display.

Eurocrime! The Italian Cop and Gangster Films That Ruled the 70s
Although this doc's ebullient title might not ring true for those who didn't live in Italy during the psychedelic era, its enthusiasm for its subject is entirely deserved. Director Mike Malloy has captured perfectly the catch-as-catch-can ethos of the prolific Italian poliziotti genre, the lesser known brother of the Spaghetti Western and the gialo. Blasting through enthralling snippets of nasty little genre films with names like Violent City, The Beast with a Gun and Die Like a Cop, Live Like a Man and interviews from famous actors both Italian and transplanted from Hollywood (as was often the custom), Eurocrime is flashy and comprehensive enough to appeal to both seasoned fans of the genre and those that are hearing its name first spoken here.

Play Dead
This might be your only chance to see Coney Island showman Todd Robbins' Grand Guignol off-Broadway spectacle outside of New York. Captured on screen by gold-star certified horror aficionado Shade Rupe with the guidance of the show's director and co-creator Teller (of Penn & Teller fame), the cheeky exploitation wet-dream promises "on stage beatings, nubile nudity, and chunks of the show performed in entire darkness" shown on film in uber-creepy night vision.

The Killing Games
Gore fiends like what they like–not every film can land the hail-Mary that was Hobo With a Shotgun, which some say is still one of the most under-appreciated films from the last few years. Barry J. Gillis (director of THINGS, the so-called Worst Canadian Horror Movie Ever Made) offers a new work that's got all the "right stuff" that fiends go to these festivals to see: A certified reprimand it was "too violent to show" for Gillis' hometown festival in Edmonton? Check. Dirty old men with God complexes and shotguns to match? Check. Production so cheap the body count almost exceeds the budget? Check. That, along with an avid endorsement from former HoleHead director Bruce Fletcher, ought to be enough to pack the seats for the film's first screening in the US.

Resolution
Despite a spooky finish, the jury is still out as to whether Resolution is even a horror movie. On face, the premise is that it's a buddy movie about two guys in a cabin in the woods. One is a junkie, while the other has taken it upon himself to force him into recovery, whether he likes it or not. In due course, it makes allusions to Native American hoodoo, hillbilly hexes, found-footage horrors and torture flicks, while casting aspersions on the reality it's tenuously but meticulously hung on–the believable scenario and easy banter between the two leads. Potently evoking a sense of impending dread closer to Mark Z. Danielewski's House of Leaves than most modern horror films, Resolution is one of the major finds at HoleHead this year.