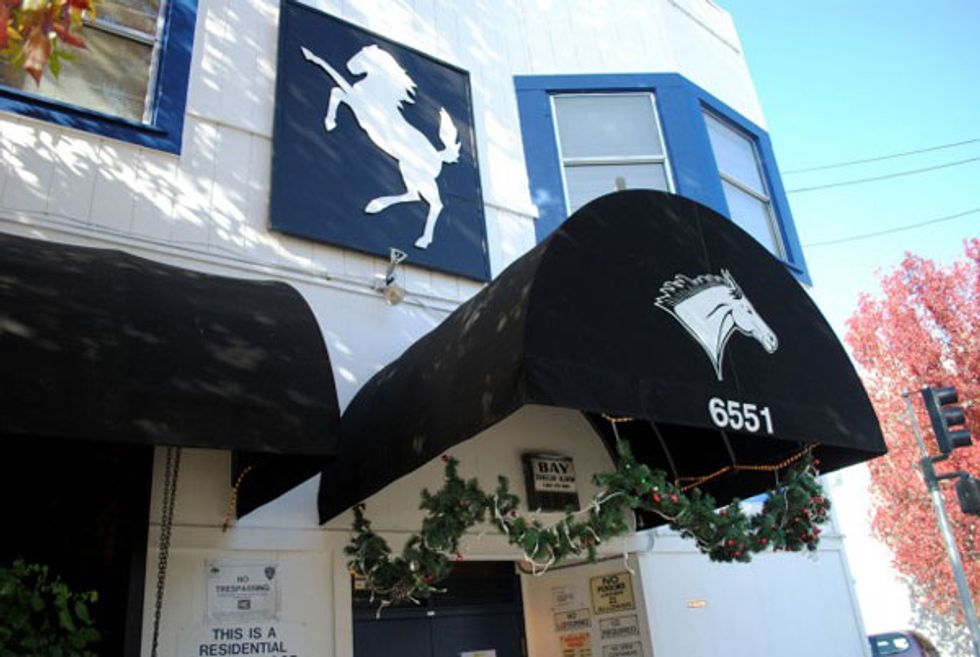 Inside Oakland's White Horse Inn, the Oldest LGBT Watering Hole in the US

Standing inconspicuously at the corner of 66th and Telegraph in Oakland, White Horse Inn is allegedly the oldest continuously operating LGBT bar in the US - but you'd never know it if you were just passing by.

I had passed the White Horse countless times while walking down Telegraph before I finally went in for the first time on an inconspicuous Tuesday in April. It didn't look any different from the Town's many dive bars that boast a predominately LGBT clientele. A few pool tables and a warm fireplace lures people in, and a couple DJs per week spinning karaoke tunes paired with cheap drink specials keep them coming back for more. It's a neighborhood joint, attracting locals from both Berkeley and Oakland, and the majority of the crowd is obviously regulars, sitting at the bar and nursing their drinks (makes sense for a Tuesday). There's nothing that prominently displays it as a gay bar, let alone the oldest gay bar in the nation.

Still, anyone who happens to stumble in on a weekday should be aware of the long history of what is seemingly the Bay Area’s chillest gay bar. The first documented records of the White Horse and its clientele date from 1933, the year Prohibition ended. Through the Depression and World War II, the inn served as a refuge for the men and women who worked in the factories in Richmond and Oakland and for sailors who returned from combat and were dropped on Bay Area docks.

Bill Jones, a 72-year-old patron who spent his collegiate summers with his father in Oakland, remembers being terrified of entering the White Horse, but at the same time drawn to its normalcy. “It was like a private club or lounge. There were paintings on the wall, and the bar would have beautiful bouquets of flowers. They played jazz, musical comedy, stuff like that. I remember it as being very warm, friendly, quiet,” he says.

And that is where the White Horse remains truly unique. Despite the turbulence and violence of the Gay Rights Movement that rocked the Bay Area and the nation, police—who would arrest any same sex couple they caught canoodling in other spots—never raided the White Horse Inn. Gay Liberation Front chapters were meeting in Berkeley and San Francisco, and UC Berkeley students were marching down Telegraph during the 1960s and '70s, but except for one minor sit-in, the White Horse remained impermeable to the changing times.

And White Horse patrons preferred the mellow vibes and stiff drinks of the Oakland hideaway to the burgeoning gay scene across the bay. Another long-time patron, Jerry Cerkanowicz confessed, “I was more comfortable [at White Horse]. It didn’t require putting on a show. It didn’t require flirting or putting up with flirting. You didn’t come here to meet people. You came here to sit around and talk to people.”

And what about its status as the oldest gay bar in the nation? Although a LGBT café in New Orleans has also been opened since 1933, the White Horse has remained in the same spot since its inception, making it indeed, the oldest continuously operated gay bar in the nation. And yet, despite it's historical status, it's always been and remains today, just another neighborhood watering hole.

Do you have any special memories of the White Horse Inn? Let us know in the comments.