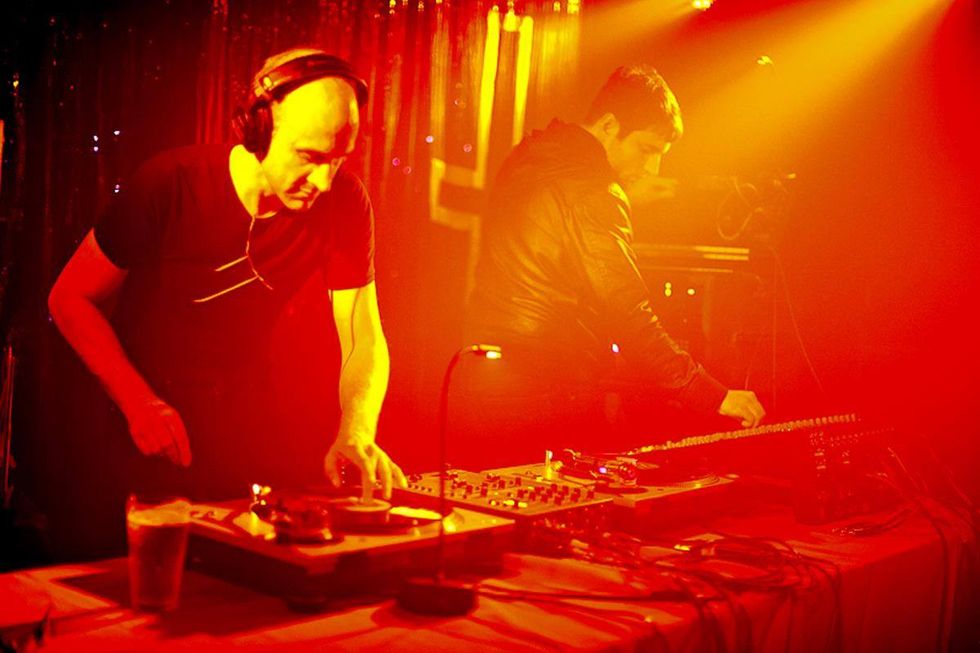 Inside the Minds of San Francisco Synthpop Trio Inhalt

It becomes immediately clear upon first listen that Inhalt is not your typical synthpop band. The trio, comprised of Bryan Gibbs, Matia Simovich, and Philip Winiger, have only released one 12” and two EPs, but that small discography belies an enormous amount of talent.

My first experience with Inhalt was watching their video for “Vehicle” on YouTube, after hearing generous praise for their debut EP on local record label Dark Entries. I was hooked immediately: “Vehicle” wastes no time roaring to action, with a rolling, punchy bassline underscoring a heavy technoid beat, all of which is tied together by Philip Winiger’s gorgeous German vocals. The looming influence of their 80s synthpop overlords (Vince Clarke and Martin Gore in particular) is obvious, but there’s a modern touch, a newness, that makes Inhalt stand out amongst their peers.

The impression that Inhalt left on me, and my inkling that they were doing things differently, led me to meet up with Bryan and Matia at their studio in the outskirts of San Francisco. This studio, dubbed The Bunker, could not be more aptly named – it is buried in the basement of a nondescript tall rectangular building situated amongst a sprawl of warehouses in the Bayview. Once inside, getting to the studio involves navigating a freight elevator and a short maze of barren passageways with flickering fluorescent lights that could have been plucked straight out of Doom II. I was beginning to understand that the building blocks of Inhalt’s unique sound were buried deeper than I realized.

After a tour of the studio, spartanly but elegantly decorated and filled with a bewildering amount of gear, I chatted with the duo about their songwriting process for their just-released Occupations EP.

“When I was initially writing the music, the basic structure, the arrangement and initial writing, I did most of that without Phil [Winger],” explains Matia. He would write an entire song on various analog synthesizers without MIDI data, timing it out by hand, which for the layman means they were recorded straight to tape, not into a computer, and overdubs were later added on top of those initial recordings, played by hand. “That’s why it has this kind of ‘off-ness’ to it,” he adds. The result feels like a live band playing electronic music, adding a human touch to a style of music that so often runs the risk of feeling sterile and lifeless.

Inhalt insist that their productions are songs, not tracks – a distinction which could be passed off as mere semantics, but it is one that explains much about why they sound the way they do. Recently, Inhalt had a recording session with Pete Byrne, the vocalist and remaining member of the British synthpop act Naked Eyes (“Always Something There To Remind Me”). “It was a learning experience, because he works very differently from me,” recounts Bryan.

After Matia asked Byrne if he wanted to see the arrangement in ProTools that they had been working on, Byrne responded pointedly: “Give me some acid, and I’ll see the music. I like to listen to music.”

Inhalt’s live performances are a bit out of the ordinary. Says Matia, “We wanted to do a live performance of our material, but a lot of it wasn’t written – that’s what the last year was, writing stuff and producing it. There’s no way that we could just put a laptop together, go up there and monkey along with Phil half-singing on top of some backing tracks, me trying to be the live synth guy, and Bryan mixing. Bryan had many years DJing under his belt, but Matia’s interests lied in sound design and songwriting. By combining their talents – Bryan locking in records, Matia adding effects, dubs and synths – they created a live performance that isn’t a representation of Inhalt on record, but is definitely something more than just a mere DJ set.

Our conversation concluded with a perfect summation of the Inhalt ethos. “There’s no shortcuts,” according to Matia. “That’s the bottom line. Bryan and I both know that. It’s gonna take time. It’s not gonna be cheap. It’s gonna be a bit of a fight. And that’s just the way it is.”

Inhalt's new EP, Occupations, is out now via Dark Entries Records, and their next live performance is Friday, October 4, at Slate Bar in San Francisco.