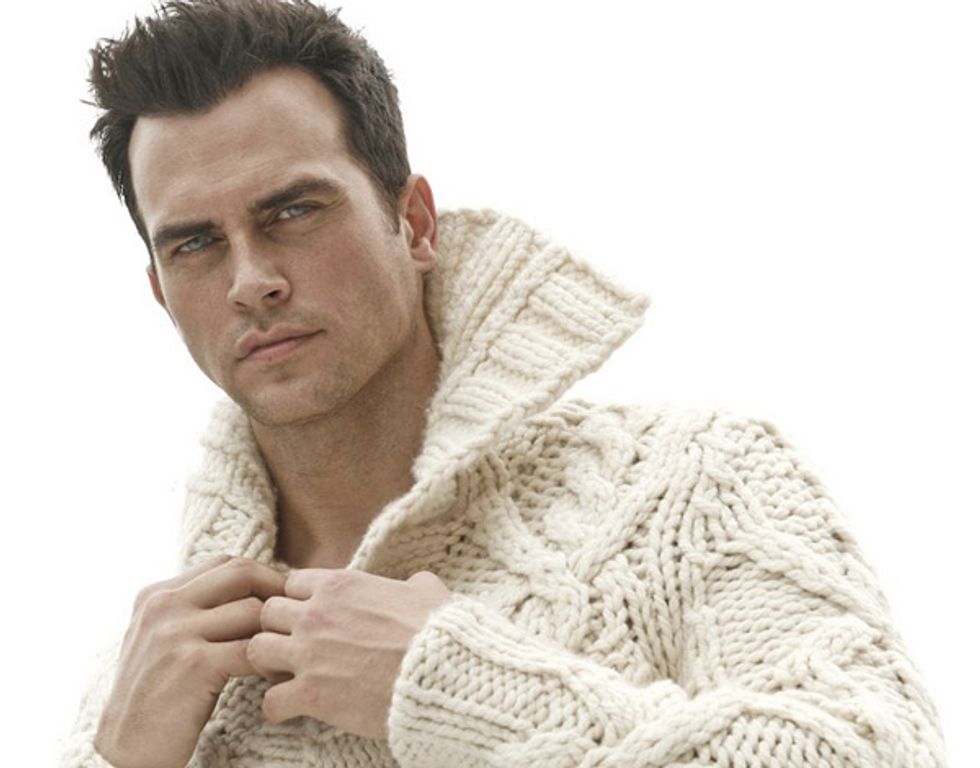 Broadway star and Tony nominee Cheyenne Jackson has been making a name for himself lately in film and television, appearing on 30 Rock, Glee, and most recently making a prominent cameo in HBO's Liberace exposé, Behind the Candelabra. Next week he'll be in San Francisco to perform with the San Francisco Symphony in their concert version of West Side Story, and he'll also be serving as a Grand Marshal in the LGBT Pride Parade on June 30, and celebrating the release of his first solo album,I'm Blue, Skies, on June 25. 7x7 talked with him by phone from L.A. about his music career, the current state of Broadway, and a few TV pilots that went nowhere.

Tell us about being on set with Michael Douglas and Matt Damon on Behind the Candelabra?

It was great. I've known Matt a little bit from 30 Rock. I had never met Michael Douglas. And just to be in the company of such great artists, it was amazing.. We shot inside Zsa Zsa Gabor's house, and I walked on set that first day and Debbie Reynolds was sitting there with Dan Aykroyd. All these amazing people sitting around chatting. I've had all these opportunities but this was a special moment. I didn't want to overthink it. I actually turned down a pretty big part in a movie to do that film because I knew it would be a great learning experience. I mean, I only had one line. But I learned so much just by watching everybody. Plus it was sparkly. All very sparkly.

When was the last time you were in San Francisco?

Three years ago, in 2010. I'm and ambassador for amfAR and I  hosted and performed at the San Francisco amfAR Gala.  I met some really wonderfully philanthropists there including John & Marcia Goldman, Micahel Tilson Thomas and his partner Joshua, Maggie Rizer & her husband.

I was also there for a weekend about ten years ago. It was pretty soon after I met my husband and it was only for the weekend. We did some tourist stuff. The world's most crooked street -- what's that called?

Right. We did some of the bars… I have a couple friends there. It'll be nice to be back and have a little time to explore.

I don't know if you've caught wind of the controversy over Bradley Manning being named an honorary Grand Marshal of the Pride Parade. Any thoughts on that?

No. I just want to come and do my shows. And I've never seen the Pride Parade there. Yeah. I'm going to be Switzerland on this one.

Seeing as you were legally married a couple years ago, are you excited about the prospects of the upcoming Supreme Court decisions concerning DOMA and Prop 8?

Well, yeah. This is a huge time in our lives and in this generation. When you look back on history in the past 100 years and see how things have moved so slowly. But just in the last ten years, so much has happened. It's very exciting. I know it can be frustrating… one step at a time and all that. But how many states now have made it legal now? Basically what's exiciting is that this next generation of kids isn't even going to blink about two men or two women marrying each other – [it will be like how they won't remember] not having the internet. To watch these changes happen in our lifetime is just incredible.

The Tonys were just on last week. What were some highlights of this Broadway season for you?

This was a great season, especially for plays. I'm a Tony voter. So I'm not supposed to say who my favorites are, but I guess now that it's over... I'm so proud of Billy Porter and Stephen Oremus and Jerry Mitchell for Kinky Boots. Mathilda is a great show and I thought Bertie [Carvel] was fantastic. Justin [Paul] and Benj [Pasek] who wrote A Christmas Story, they've been my friends for so long. I still think of them being 18 or 19 – it's so fun to watch them bloom and take advantage of opportunities and watching their careers take off. Patina Miller was great [in Pippin].

Every single year it's so exciting – there are so many shows right now that we often can't find a theater to put them in.

I'll say the show I did [The Performers, with Alicia Silverstone] got short-changed, but -- ahem -- that's another story.

Would you say we're at a particularly good moment for theater actors when it comes to getting jobs in television? Why do you think that is?

I don't know the answer to that. There have always been people who have gone back and forth between Broadway and TV. Maybe we're just more aware of it now because of social media and the internet. And a lot of TV producers now know a bit more, maybe, about what's going on on the Great White Way. What's exciting is that many of us are friends and we all get to connect in L.A.

I've now done 7 pilots in 7 years and none of them have been picked up. We just found out Onion News Network with Jeffrey Tambor is not going. As my mom says, 'That's a fancy problem.' It's a good problem. I get to work and that's great.

Would you say your first passion is music, or the stage?

I can't put them in order. I know that's a boring answer. It's the truth. I love movies. I did four this year. I just got done shooting in Budapest with Gena Rowlands – it's called Six Dance Lessons in Six Weeks and I replaced Sean Hayes. I mean, Gena Rowlands was my leading lady. It was a master class every day. I've done a bunch of movies. I love the medium, the time you can invest in a character. I love the pace of television – you make quick choices and move on. Theater: I love it because it's live. One night only. What happens one night only happens there, and the next night could be something different. That what makes it so scary and also so powerful and magical.

Music has always been a part of me… This past year and half, fostering that side of my art has been really, really fulfilling, writing songs for myself and other people. I just announced the new album yesterday and it will be out on June 25th. Some people at the label wanted me to do some covers, and I insisted they all had to be originals. I wanted it to be totally me. Love it or hate it, that's what it is. I hope that people can see who I am thorugh it. And it's a great summer album if I do say so myself.

Can you explain the title, I'm Blue, Skies?

It's meant to be whatever it means for you. It's the name of a song on the album that's very, very personal to me. There was a lot of talk about the comma. I know what it means to me – I am blue, skies – the magic and energy of the skies are part of me. And do I get blue? Yeah, sure.

This is your first solo album?

I've put out singles. When I first started writing I just decided to put a few things out first.

Everybody keeps saying, 'What's your sound?' Listen to it and see. It's hard to explain what your sound is. You hear the succession of songs. I wasn't sure what my sound was -- but it started to come together, and now I think I know.