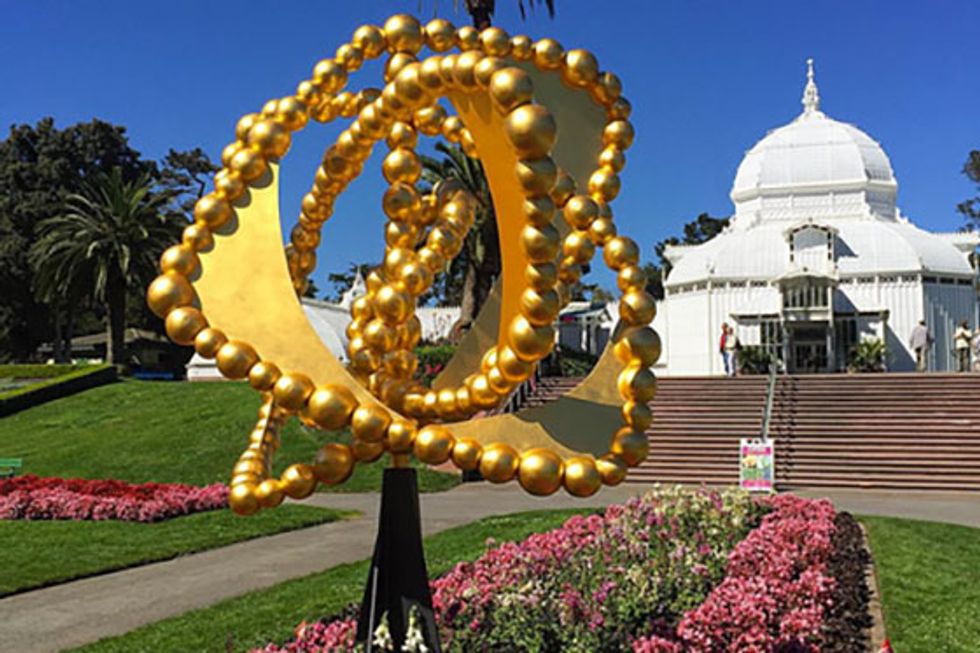 San Francisco will sparkle a little brighter this fall thanks to a pair of dazzling new artworks from renowned Parisian artist Jean-Michel Othoniel. Two large-scale sculptures were installed last week: La Rose des Vents at the Conservatory of Flowers in Golden Gate Park, and  Peony, The Knot of Shame at 836M Gallery.

Othoniel (pronounced OH-TOE-nyel) works primarily with hand-blown glass, assembling strands of large spheres into glistening sculptures that resemble a twirling necklace or beautiful strand of DNA. Earlier this year, he caused a stir when he became the first contemporary artist in 300 years to contribute a permanent art piece to the Palace of Versailles.

We caught up with Othoniel last week and asked him about his inspiration and current works in San Francisco.

7x7: You are a multimedia artist who has worked with wax, sulfur, and watercolor. What attracted you to glass?

I have always been interested in creating artworks that stimulate senses other than sight. For example, the desire to lick or the sound of tinkling glass. I started working with glass after I discovered Lipari obsidian, a volcanic glass, on a trip to Naples. I was struck by how the dark, opaque stone came from the same basalt as an immaculate, white pumice stone. After a project where I worked to recreate obsidian, I became very interested in the the qualities of glass and the work of glassblowers.

Glass is like a frozen liquid but its beguiling, smooth, and even sensual aspects are formed through a violent creative process. Blown glass bears traces of the glassmaker. I like that if a ball of glass is wounded during fusion, the flaw will resurface despite every effort to smooth it over. I began asking my gaffers to wound the glass, imprinting it with scars that I find beautiful. I am very interested in this technique that unifies everything, this material that sublimates wounds and is both sensual and violent.

Both Peony and La Rose make allusions to flowers and mythology. Can you share your interest in those things?

My obsession with the hidden meanings of flowers is a way of looking at the world and the marvels that surround us. Since my childhood, I have amassed notes and photographs of trees, plants and flowers that I love. Over the years, the peony came to be my favorite. It feels unworthy of itself, and perhaps that is why it is a symbol of shame—and why I love it so much.

It inspired me to create Peony, The Knot of Shame. A great knot of red glass pearls constitutes the structure, contours, supple shapes and intense colors of the flower. From the tight bud to the mass of petals falling off at its death, the peony offers an image of beauty—an ageless beauty in which it hides its ordinary aspect.

La Rose des Vents is a gorgeous piece as well. Tell us about its inspiration.

La Rose des Vents pays homage to the compass rose, an ancient device used to gauge wind direction. It is a mobile sculpture that moves with the wind. It was inspired by the desert rose, delicate crystal formations as fragile as glass that appear in arid places. Just like Peony, The Knot of Shame, La Rose des Vents embodies my love for the symbolism of flowers and a contemplative approach to nature.

Your artwork has hopped from gallery to garden and back. How does each new context affect a piece?

Since my first public commission in 2000, for which I created Le Kiosque des Noctambules (The Kiosk of the Nightwalkers) for a Parisian subway station, my sculptures have graced both public squares and museum spaces. Site-specific works are opportunities to test the many possibilities of glass and develop the themes I cherish.

Traveling is an important part of my work. It offers me an opportunity to instigate a dialogue with locations steeped in history. I’ve produced pieces with glassblowers in North America, Mexico, France, Italy, Switzerland, Japan and India. What really interests me is to create artworks that both reflect the beauty of a place and heighten its magical qualities.

Your Versailles piece, Les Belles Danses (The Beautiful Dances), has a wonderful sense of place that speaks directly to its setting. How do you think La Rose des Vents functions in its current placement at the Conservatory of Flowers in Golden Gate Park?

For The Beautiful Dances, I paired blown glass with gold leaf in respect for Le Nôtre’s white marble and gilded bronze gardens. Gold, the symbol of the sun and perfection, evokes the splendor of the Court as well as the aura of the Sun King and his divine dimension.

I also incorporated gold into La Rose des Vents. Installed in front of the Conservatory of Flowers, it appears as a golden flower among flowers. It can shimmer in the sun and shift with the breeze, animating the earth with moving shadows and reflecting the sky with golden mirror beads.

Peony, The Knot of Shame, along with models of the artist’s Versailles sculptures and a series of new gold paintings, will be displayed at 836M until January 14, 2016. La Rose des Vents will be displayed at the Conservatory of Flowers until the end of June 2016. 836M Gallery is working in partnership with SF Arts Commission, SF Rec and Parks, French American Cultural Society and the French Consul to identify a permanent public home for the piece in San Francisco. // 836M Gallery, 836 Montgomery St., 836m.org