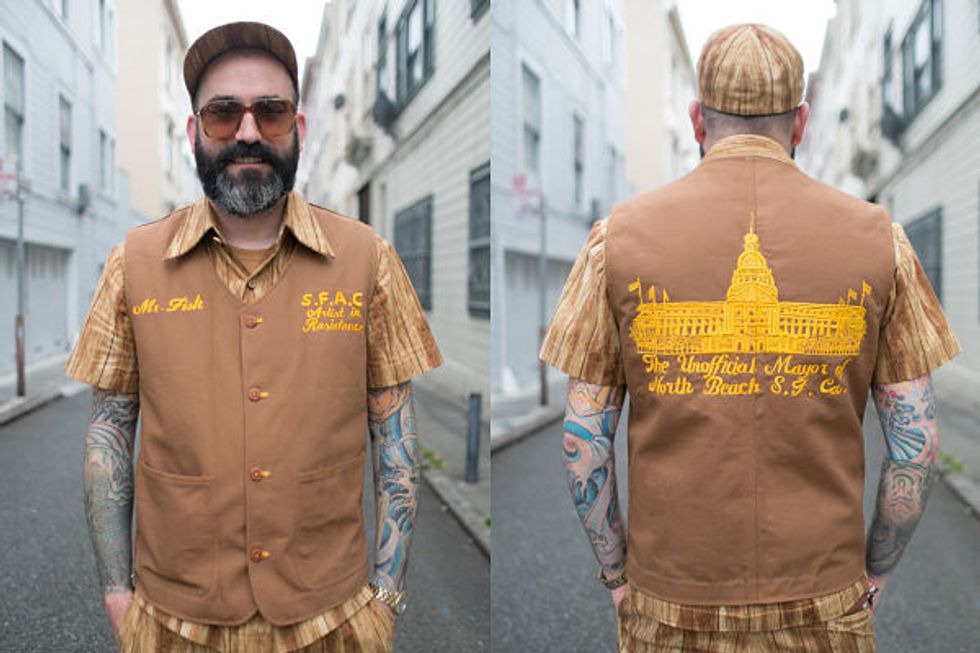 Celebration of San Francisco City Hall's 100th year continues, with the recent announcement that the Beaux-Arts landmark has welcomed its first artist in residence. And we have to hand it to the sometimes-too-safe SF Arts Commission—they've selected quite the interesting character.

Many of you are probably already familiar with Jeremy Fish. A New York State native, Fish moved here to attend SFAI in the '90s, and has been hanging around North Beach ever since. As a fine art painter, he has shown his work internationally. But even if you don't know his name, you've most likely seen his work via those creepy-cute commercial illustrations and trademark skulls and bunnies on T-shirts, caps, pint glasses, and prints for his brand, Superfishal.

Jeremy Fish's 2011 "Silly Pink Bunnies" mural and sculpture in the Lower Haight, which was destroyed in an official "bunny funeral" in 2013. Soon after, a Kickstarter campaign raised over $50,000 to erect a permanent bronze bunny at Haight and Laguna sometime in the future. (Photo by Aaron Durand via The Citrus Report)

Now perhaps you can understand why we're just a little surprised (and excited!) by this selection from the SFAC to celebrate pretty City Hall—Fish is a little out there, in every wonderful way. Take it from Fish's friend and collaborator, hip-hop artist Aesop Rock:

Fish's images seem to be rooted in an alternate world—a world where gnomes travel via saddled dachshund-back and birds of all nations hatch adorned with the heads and hairstyles of every human stereotype imaginable. The bold, precise outlines give his ideas an immediate impact, but it's the aftertaste that really cuts deep.

Somehow, some way, this wholly unique talent, who has taken up residence at City Hall as of July, will combine his artistic vision—which at once evokes flavors of cultures ranging from Native American to hipster to hip-hop to we-don't-know-what—with his love of San Francisco to create 100 new drawings and photographs for an exhibition titled O Glorious City.

"I Left My Heart" print by Jeremy Fish

Between now and the exhibit's opening on November 4, 2015, Fish will be bopping around City Hall, interacting in its habitat and exploring its intricate architecture in the search for inspiration. Fish says the final showcase will amount to "100 things all San Franciscans should love about their city." We can't wait to see what he comes up with.