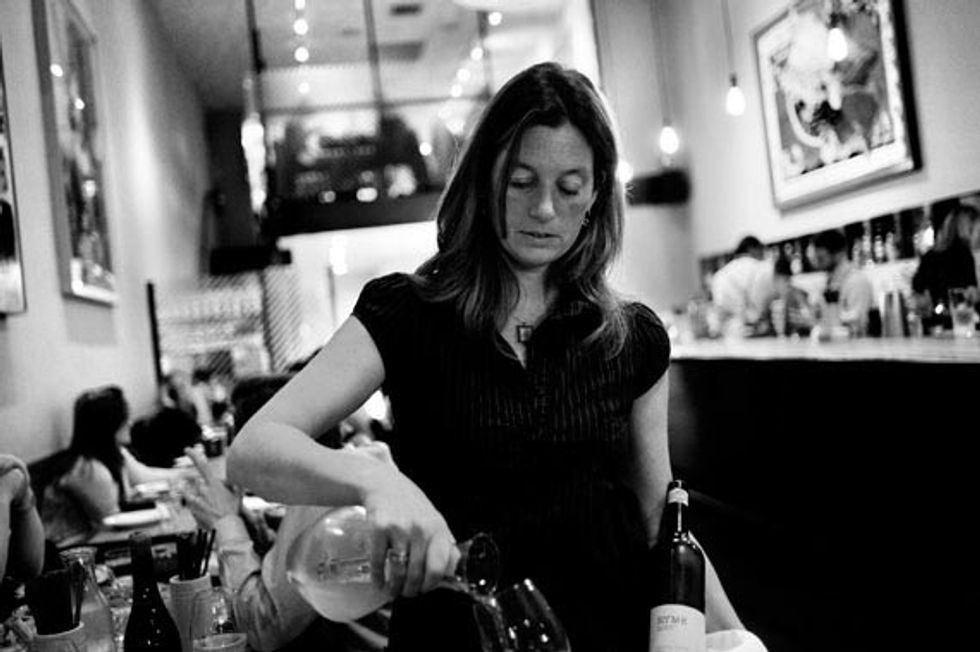 Local Sommeliers Experiment with a New Breed of California Wines

At a trendy new restaurant in town, the sommelier approaches your table. At least you think she’s a sommelier. Wearing sneakers, she looks barely old enough to drink.

You tell her that you’re looking for something to go with both your duck confit and your date’s sea urchin salad. Without hesitation, she recommends a wine she recently discovered. Gesturing enthusiastically, she speaks of everything from its minerality and complexity to the winemaker’s extensive collection of ceramic Lucky Cats. Never mind that you’ve never heard of the producer, the varietal, or the region in Northern California where the grapes were grown—you are an adventurous, urbane wine drinker. It’s your duty to take the leap. What returns to your table is a “white” wine that’s closer to orange and made from a pink-skinned grape.

Daring wine pairings are a part of the current SF  dining experience more often than not. In the past few years, a new generation of local sommeliers has all but dismissed the expected style of California wines that critic Robert Parker and Wine Spectator have pumped up with high scores for years—“new-world” wines that are technically perfect, fruit-driven, high in alcohol, and brimming with oak.

It wasn’t that long ago, however, that sommeliers  regularly touted Parker scores in order to sell wines to restaurant customers who were equally eager to buy them. Kim Beto, who worked as a wine director at Postrio during its Wolfgang Puck days back in the mid-1990s, remembers the day he realized that high-scoring wines had become clones. “All those wines tasted the same,” he says, recalling a tasting of Napa and Bordeaux wines that received the coveted 100 points (a perfect Parker score).

But today’s wine lists are full of quirky, off-the-grid wines that you won’t likely find between the pages of Wine Spectator, much less on the Parker scoreboard. Finding these wines used to require looking to the Old World or Europe, but now more and more sommeliers are collaborating with California makers to make old-world styles—balanced, terroir-driven specimens that often focus on unusual varietals—right here in our home state.

“California was the birthplace of wine technology. Now we’re fusing this technology with techniques that are centuries old,” says Hayes Valley-based Absinthe Group wine director Ian Becker, who favors up-and-coming winemakers who embrace techniques such as whole-cluster fermentation, oxidation, carbonic maceration, and the exclusive use of indigenous or wild yeast. To some critics, the wines that result may seem imperfect—or even flawed. But Becker argues that they have an individual character.

While the master sommelier in training imparts his taste to the restaurants he oversees (Absinthe Brasserie and Bar, The Boxing Room, and Comstock Saloon), Becker sees himself as “part of the winemaking process in a very organic way,” using his restaurants and wine shop, Arlequin Café and Wine Merchant, as platforms for pioneering vintners.

Chris Brockway of Broc Cellars, a winery in Berkeley of all places, is one such example. His wines include a 2010 Carbonic Carignane crafted from grapes grown on 120-year-old, dry-farmed vines and made with indigenous yeasts and no additives. Though Arlequin is a small shop, it carries five Broc Cellars wines, a fact for which Becker is unapologetic. “Customers like them,” he says, “and we want to support him.”

Innovative California wines are also a focus on the list at Charles Phan’s latest Mission District restaurant, Wo Hing General Store, where wine director Chaylee Priete devotes an entire section to such unexpected offerings as Trousseau Gris and Blaufränkisch, both from Pax Mahle’s Sonoma offshoot label Wind Gap, and Ribolla Gialla, which shows up both in a skin-fermented interpretation by newcomers Ryme Cellars and in a blend crafted by vineyard manager Steve Matthiasson.

Just two blocks from Wo Hing, Commonwealth also offers hard-to-find wines thanks to sommelier Sarah Elliot, who proudly pours Scholium Project’s 2009 Naucratis made from Verdelho grapes grown on a mountain vineyard in Sonoma and fermented for more than a year sur lie (resting on dead yeast cells). A decade ago—when Elliot was still under drinking age—Scholium Project’s winemaker, Abe Schoener, was considered a  renegade in the business. Having once taken aim at  banishing all fruit flavor from his wines, Schoener has since risen from obscurity to success due in part to the support of sommeliers like Elliot. “When one person is successful,” says Schoener, “it makes room for people to take chances.” Add San Francisco’s risk-taking wine drinker to this equation, and we may just have a new (if old) style of California wine in the works that prides itself on defying the once widely accepted point system. Wild west, indeed.