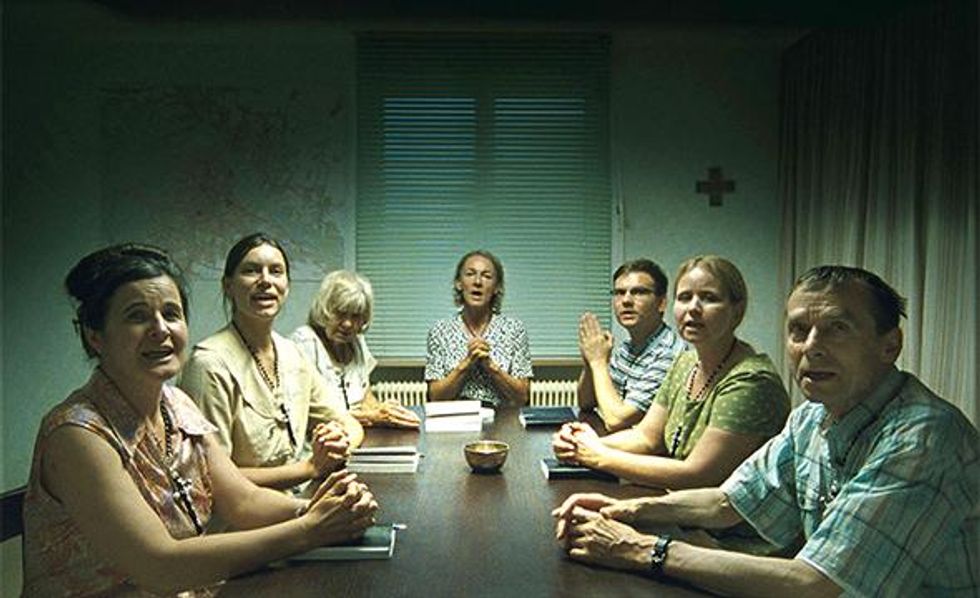 The official website of 60-year-old Austrian director Ulrich Seidl, whose Paradise trilogy screens at YBCA starting tonight, acknowledges a certain showmanship as it scrolls through his accumulated 'titles': director, writer, producer, voyeur, misanthrope, pessimist, blackguard… A bona fide festival sensation, Seidl is arguably the most exiting European filmmaker currently working in the provocateur tradition,  which now faces the (temporary?) demise of its other great pranksters--Haneke's self-seriousness has become po-faced (Amour) and Lars Von Trier is happy to earnestly traffic in ero-gore (Antichrist).

Seidl's history as a filmmaker is appropriately contentious: after being all but expelled from Vienna Film Academy for his deadpan home-town documentary Der Ball (The Prom), he worked his way through a series of reality-bending docs like Animal Love, an un-judging portrayal of a series of subjects with questionable attachments to their pets, before captivating the attention of the international art cinema world with his first narrative, Dog Days. Debuting in a series of high-profile premieres (Cannes, Venice, Berlin), his latest work is a triptych that was initially intended to be one very long film.

Working alongside cinematographer Ed Lachman (The Limey, The Virgin Suicides) who has also lensed for legendary continental filmmakers like Wim Wenders and Werner Herzog, the director approached Paradise as a long improvisation, shooting over 90 hours of footage in sequence, with a mixture of actors and non-actors. Loosely revolving around the desires of women and Seidl's inkling that "we search for our own paradise and happiness but we all fail," Paradise will wow, shock, revile, and possibly charm you with its own sense of implacably black humor.

The first of the set, Paradise: Love dips closest to the queasy discomfort of Seidl's disturbing  Import/Export, which first brought the directer to local audiences when it played at YBCA years ago. Love swiftly introduces the trilogy's principal characters before tracking Teresa, a heavyset middle-aged mother, on a much-needed vacation to Kenya. Following the lead of her friends, who by all accounts have been on vacation for quite some time, she's soon indulging in the local cottage industry, sex tourism. Finding company with a series of young hawkers plying necklaces and jewels on the beach who are also selling themselves, not outright but as love-for-hire surrogates, Teresa "dates" while her paramours gently (and sometimes not-so-gently) extort her for cash to remedy various invented problems. By the film's end, it's difficult to decipher who is the exploiter and who is being exploited, a notion that's par for the course in Seidl's self-implicating world: the Kenyans hawkers in Paradise: Love were all actual sex workers, and reportedly extorted Seidl for additional funds after the first half of the film was completed.

Paradise: Faith returns to Austria to the home of Teresa's sister Annamaria, herself searching for fulfillment. Annamaria leads her church group, proselytizing on weekdays to homebound men and prostitutes (both of whom laugh at her proposals), her hair in an air-tight bun. Her repulsion to the scandalous acts constantly perpetrated in the world around her seems to come from a certain lack of love, and soon her devotion is revealed as unhealthy, culminating in bouts of self-flagellation and a vastly uncomfortable sexual moment with the cross that hangs in her ascetic bedroom. Seidl plays all this out with apparent objectivity, but Annamaria's cartoonish behavior nips at camp before Faith is electrified when her own husband Nabil, a Muslim paraplegic, appears in the film's second act to problematize Annamaria's unhealthy relationship with Jesus and ultimately fights to win back her love in his own halting, macho way.

During Paradise: Love, Teresa often calls Melanie, her daughter, for a check-in and never seems to connect. No wonder--in Paradise: Hope, the teen is away at Austria's version of "fat camp," learning the benefits of good eating, discipline and exercise, which Seidl presents in a series of gorgeous, giggle-inducing symmetrical tableaus. Surrounded by other teens like her, Melli chooses to fall for the camp doctor, who, instead of rebuking her, encourages her advances with flirtations of his own. Without revealing the ending, it can be said that the trilogy's final entry is its most naive, remaining true its title while not shying away from the conflict and controversy that makes Seidl's films crackle.

In the tradition of other great provocateurs du cinéma, many of Seidl's most intriguing condemnations are his own; before looping back to it's origin at 'director,' his website displays a appellation of which he is particularly proud: humanist. "It is always my intention for the viewers to see themselves," he says. "I do not judge, but I show how people behave in their longing for happiness. If the viewers have a problem with my films, it may be that they have a problem with themselves too." If you've got the guts, trek to YBCA and face your own Paradise.

Seidl's Paradise Trilogy plays at YBCA Screening Room July 13-30. YBCA notes: "Each film in the trilogy is a complete work in itself. It is not required to see all three, though you will have a more rewarding and richer experience if you do, as themes in the films relate to each other."