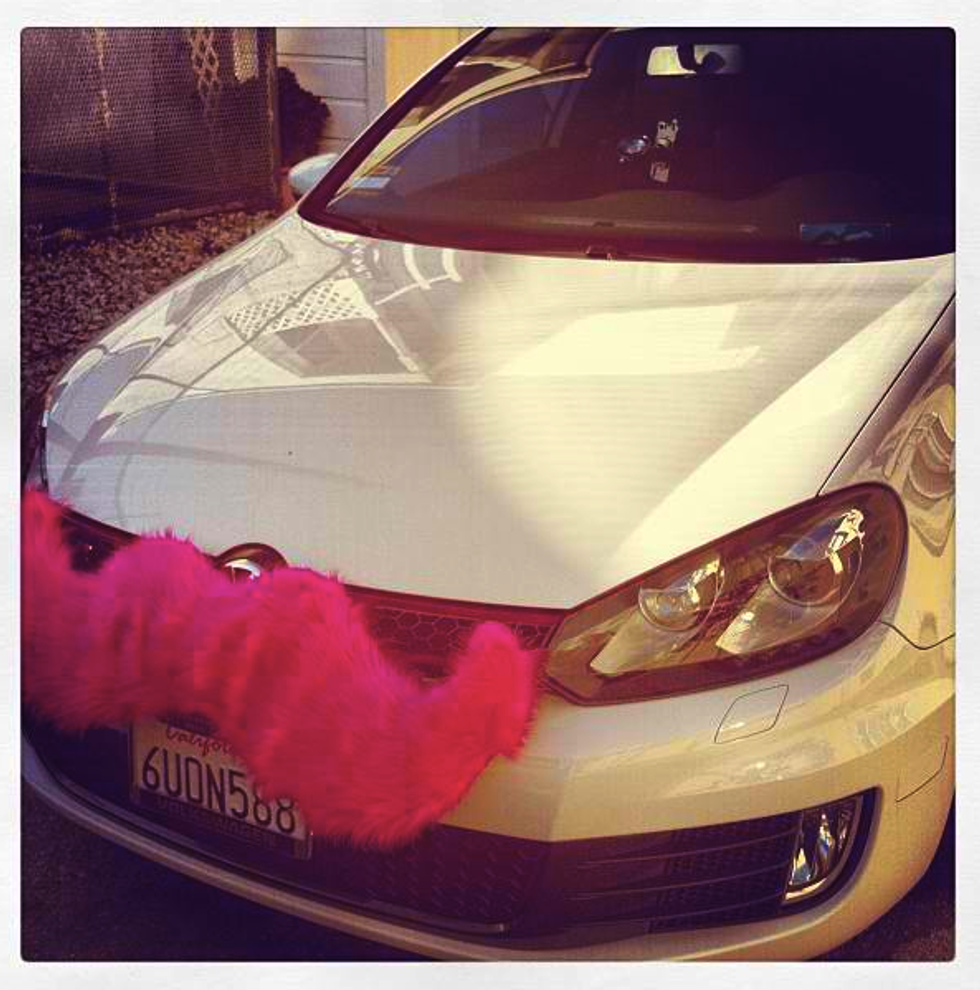 Lyft Ride-Sharing Cars Are The Ones Sporting Pink Mustaches

As I was driving my daughter up Bernal Heights after school on Monday, I couldn't help but notice another car dropping off a passenger down the block, because it had a pink mustache on its grill.

The next day, returning from my son’s soccer game in the Mission, we passed a car with a pink mustache picking up a passenger.

Yesterday, when I was entering the concourse for the TechCrunch Disrupt conference, across the street was yet another car with a pink mustache.

Inside the concourse, one of the startup services being featured this week was Lyft, the ride-sharing app (iOS and android) that was launched just two weeks ago by Zimride, a company we’ve profiled here before.

And whereas Zimride specializes in matching up drivers and riders on longer trips, such as SF to LA, Lyft focuses on in-city trips, the average being just two miles.

So it is the Lyft cars zipping around town that are wearing those pink mustaches.

Co-founder John Zimmer says the company came up with the concept behind Lyft just three months ago, built it in roughly two weeks, beta tested it for a couple months, and launched it on August 28th. That's fast.

By the end of last week, Lyft already had 150 drivers providing hundreds of rides per day, with the heaviest use during commute hours and in evenings and on weekends.

Riders make a voluntary donation to drivers, which for the average ride comes to about $10.

“Legally the payments have to be voluntary donations,” explains Zimmer, "because they're classified as reimbursements to defer costs.”

Some drivers are already working as many as 20 hours a week, which should translate into deferring a substantial portion of the costs of owning their cars.

The service is SF-only for now but will be expanding into other markets soon.

Zimmer stressed that his team is determined to be build a “safe, secure community,” as are all of the peer-to-peer startups in the collaborative consumption space.

Some of the others we’ve profiled here include Getaround, Airbnb, Zaarly, and LiquidSpace.

Lyft will compete against another locally-based ride-sharing company, Sidecar.

As part of its process certifying drivers, Lyft carries out a DMV check, a criminal background check, and two in-person interviews. Drivers must be insured, at least 23 years old, and have held a U.S. driver’s license for at least three years.

The vehicles have to be year 2000 models or newer, clean, and in good working order. Lyft inspects all the vehicles. The company tracks the cars when they are in service with GPS and also carries a $1,000,000 in excess liability insurance on all the vehicles.

Zimmer says part of the motivation behind ride sharing is environmental. “If we can help fill the 85 percent of unoccupied seats in private cars, it will mean fewer cars on the road and a lot lower harmful emissions.”

Riders sign in with Facebook Connect, and maintain a credit card on file. As with most p2p services, ratings help build the reputation of those in the community. “As a driver, unless you maintain a 4.7 (out of 5) rating, you're removed,” says Zimmer.

Early users report the experience is safe and fun and that they enjoy meeting new people this way. Some drivers have reportedly gone out of their way to help passengers, brewing them coffee or helping them carry in the groceries.

Forty percent of Lyft drivers are women. One recently listened as her passenger confided that she had just gone through a breakup; rather than drop her off immediately she kept driving around for a while until the passenger could finish telling her story.

And, as the passenger got out, she gave her a big hug.

For more coverage of local startups, check out our ebook, Thirty Startups to Know Now.