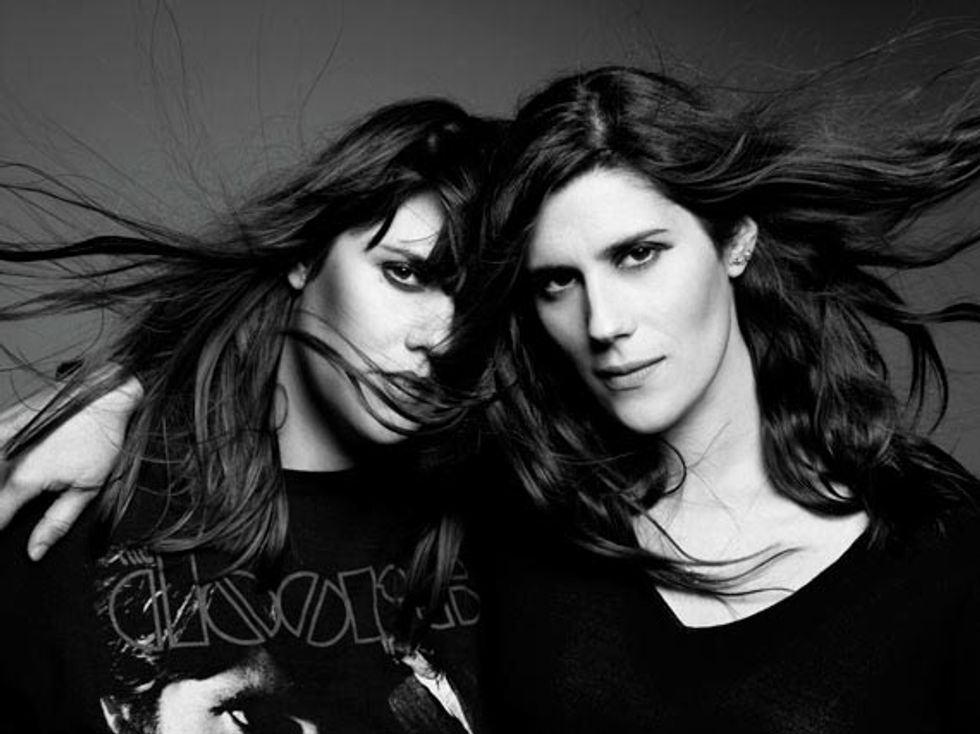 Meet the Natives Who Rep SF in the Fashion World Abroad

Here in San Francisco, where cold-brewed coffee is practically baby’s milk and connectivity has an inflected meaning, everything is a matter of pride. Many come to visit, but few are lucky enough to call SF home. Remember Kerouac’s moony edict that inspired a pilgrimage of young hopefuls? He wrote, “The air was soft, the stars so fine, the promise of every cobbled alley so great, that I thought I was in a dream.”

Nurtured by said promise, the city’s steady uptick of gold stars—as a culinary utopia, an innovation incubator, and startup hype machine—trips at the sartorial. Even the natives tend to concede that fashion kind of goes dark around these parts. (Though, in their vintage mash-ups, one could make the case that “dark” is the new black.) Yet for a place shafted for closing its eyes to the light, the Bay Area is the unlikely birthplace of many a high-fashion player. (Ahem, Alexander Wang.) It prompts the question: If this town is not the nation’s fashion capital, could it be the gateway? Is there something, as they say, in the water?

No one grows up here without later attributing some life influence to the dichotomy in our landscape: the industrial and cultural, thrown against a canvas of wild elements. “The nature and  iconography lends itself to romantic storytelling,” says designer Derek Lam, 47, who grew up in the Sunset and spent afternoons in his grandparents’ Chinatown garment factory, riveted by the seamstresses in the wedding dress department. Lam’s parents immersed him in SF’s sophisticated side, where dinners at classic restaurants like the now-closed Ernie’s and trips to the Asian Art Museum and SFMOMA would become part of the designer’s fabric. Lam moved to New York to study fashion at Parsons in the mid-’80s but admits he still feels the pull back home. “Who can blame someone,” he says, “for wanting to remain in paradise?”

It can be said that San Francisco offers a bifurcation parallel to fashion’s current zeitgeist—a curated mix of high and low. Rock chucked against ocean, crack cocaine against addictive third-wave coffee, urban grit against operatic glamour. Lam credits this clash of tradition with counterculture, the formal and the informal, with helping him strike tension in fashion. It is the driving force behind his vision for fresh and feminine sportswear. “Finding that space between what we desire and what we need—that’s where I try to focus my work,” he adds.

One of Lam’s early interns was none other than fellow San Franciscan Alexander Wang, who has also found success in playing with contrast and, as Wang puts it, “elevating the everyday.” Growing up in the city, where his parents owned a plastics manufacturing business, Wang quickly honed his aesthetic for accessibility and comfort. He attended the California Street college preparatory Drew School, where his classmates Vanessa, Victoria, and Samantha Traina would also become fashion darlings. Samantha is currently the fashion editor at C Magazine; Vanessa, who recalls a teenage Wang reworking her vintage jeans into skirts, is a contributing fashion editor at T: The New York Times Style Magazine; and Victoria styled Wang’s debut runway show in 2007. Boldfaced polymaths in their own right, the sisters were early influencers in the off-duty model look that first catapulted Wang’s eponymous label to cult status. This season marked the 29-year-old’s first collection as creative director at Balenciaga.

Wang’s instinct to marry relaxed with refinement—be it by reimagining the sweatshirt as a high-ticket item or building a club-going ensemble around a slouchy, slept-in tank—is informed by that “she’s come undone” look of NorCal beach culture. Overt glamour? Too predictable. The designer’s métier isn’t about dressing the glitterati in couture; it’s about what these girls want to wear after the black-tie, en route to In-N-Out for a double-double.

“Design attracts when it vibrates against good taste. It doesn’t just stand still. It has to advance into something transgressive and challenging,” says San Jose-raised Patrick Li, the T magazine creative director who has become a kind of low-flying legend, known for his keen design and editorial vision. As founder of the multidisciplinary design studio Li, Inc., the 45-year-old has also designed branding and ad campaigns for such influential houses as Jason Wu and Bottega Veneta. When asked whether SF could ever be rebranded into a viable fashion epicenter, Li—who recently spent time here on a commission for Sephora—deflects the question. He notes that a person’s set of cultural values—what is deemed good or bad, exciting or dull—is honed by early environs. In his mind, it is the Bay Area’s geographical gifts and easy-living lifestyle—frankly, our badges of honor—that inspire a relaxed approach to fashion. “I mean, I can’t imagine seeing a woman in Alaïa at the local Safeway!” he jokes.

That’s not to shortchange the natives. These hills may never be a catwalk. But, as Vogue-anointed It Girl Lily Kwong points out, style, approachable and singular, is here in spades. “Style is a way of carrying yourself; it’s an attitude,” muses the Pacific Heights-born and -bred model, who spent childhood summers bird-watching along the coast and hanging out with her designer cousin, Joseph Altuzarra (who grew up in Paris). Kwong, 25, who recently launched her own line of iPhone and iPad accessories, attributes much of her aesthetic to picturesque spots like the Golden Gate Bridge, Muir Woods, and the vistas along Highway 1, which she often breathlessly documents on her eponymous blog.

On the subject of technology, one wonders if fashion influencers sprung from the Bay Area are ahead of the digital curve thanks to ties to Silicon Valley. Take by-product Peter Som, 42, whose pretty, high-society designs have caught the eyes of some 3.3 million followers on Pinterest. (Not surprisingly, he pins SF and Mill Valley, where he spent much of his youth, on his “Favorite Cities” board). For his Fall 2013 collection, Som eschewed his coveted 10 a.m. runway slot for a democratizing digital fashion show. He has an online voice that reflects a healthy work-life balance—think tweets from photo shoots followed by quiet, sun-dappled weekends in the Hamptons and shots of him cooking at home. “This intangible sense of ease that I want my clothes to impart—I could attribute it to the laid-back California lifestyle that I love so much,” he says.

A casual mentality, coupled with an indefatigable work ethic, could be the ticket to success in the fashion-world pressure cooker of New York. “I always try to keep calm and maintain perspective when everything around us is going crazy, as tends to happen in fashion and editorial,” says W magazine photo director, Caroline Wolff, 32. “I’ve been told this is very ‘Northern California.’” Wolff, who began her career as an intern at 7x7 in 2003, has gone on to collaborate with the Tellers and Testinos of the world. But she credits much of her gimlet eye to growing up in Marin County. “The gorgeous muted pastels and gray tones of Bolinas are like a Craig McDean photograph,” she says. Her idea that imagery can be provocative without being overly retouched or manipulated is a manifestation of the Bay Area’s rugged physical beauty.

It is worth noting that Li and Wolff are part of a UC Berkeley alumni contingent among Manhattan’s high-fashion circles—a remarkable “You, too?!” that includes Opening Ceremony cofounders and Kenzo creative directors Carol Lim and Humberto Leon, Rodarte’s Kate and Laura Mulleavy, and menswear designer Patrik Ervell. Arguably, this party of five is the best known and closest-knit of the college’s fashion alum, having painted the streets of Berkeley and SF together in the mid-’90s.

“It was a magical time,” Lim recalls. “There was a feeling of risk-taking and adventure that continues to give us the confidence to push our comfort zones. The interesting thing is, none of us talked about going into fashion, but instead spent a lot of time doing things together—watching movies, going to house parties and concerts, visiting museums, and eating.”

Appropriately, their Bay Area collegiate days would become a source of inspiration in these designers’ respective careers, with native footprints found throughout their work. Opening Ceremony’s marijuana-themed jerseys? So  Berzerkeley. Rodarte’s Spring 2011 collection? An ode to California’s redwood forests.

It goes without saying that San Francisco is not an industry influencer in the rarefied, aspirational sense. But perhaps that was never the goal. For everything this city strives to be, spawning a brigade of veritable fashion stars and spreading the love afield may just throw the onus to inspire and influence back into the streets—wherever those streets may lead. “My heart is in San Francisco. I will always, always come back,” Kwong says. But while she’s away, she’s happy being a quintessentially Californian face where people least expect it. “That’s what we do in the Bay Area: We go out into the world, and we find each other.”