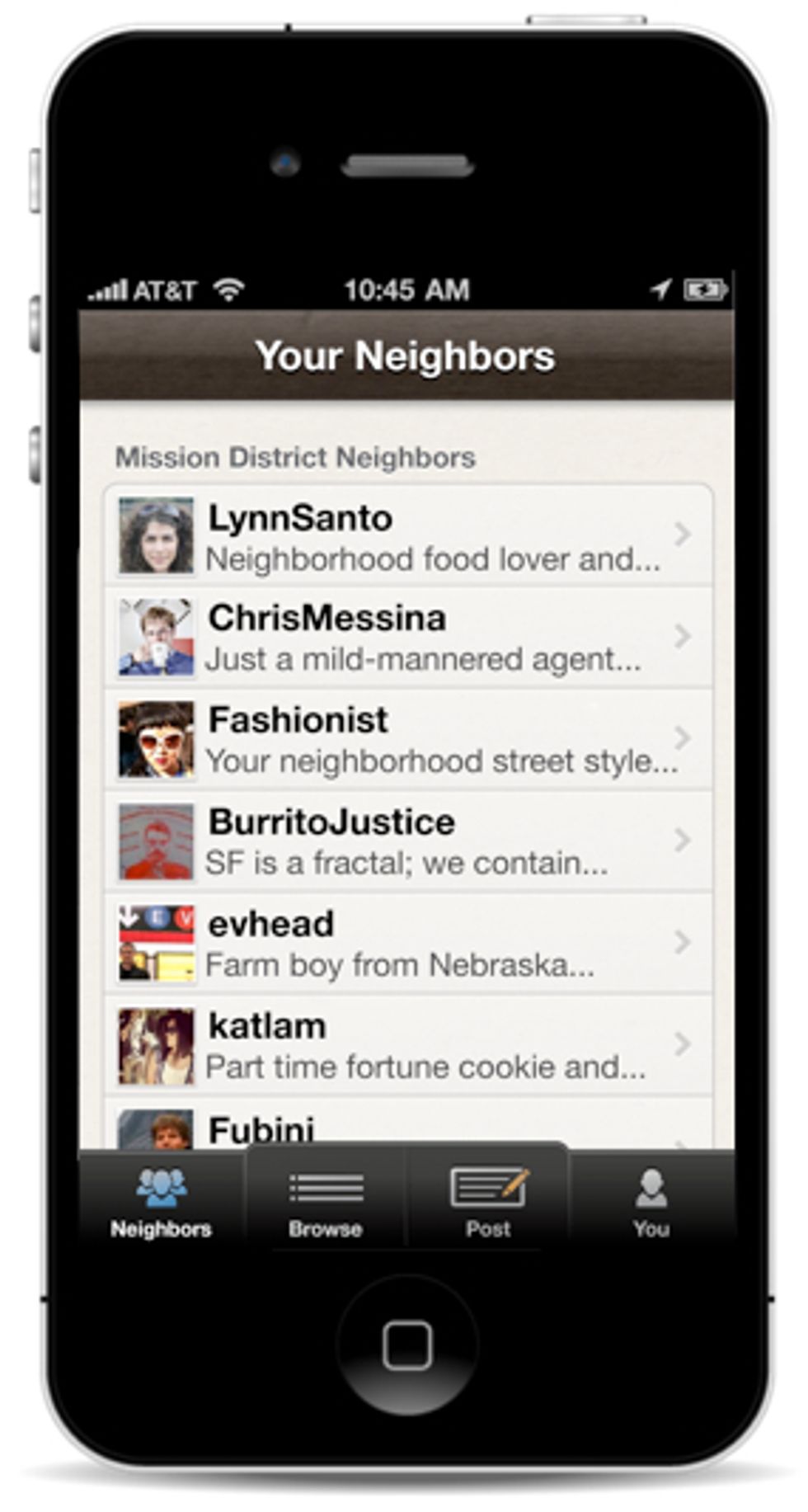 Mobile Craigslist Gets Hyperlocal With Blockboard

Yet when you really need a friend, it is at least helpful and sometimes critical that that person lives nearby.

Blockboard is a hyperlocal startup on a mission to do something about that problem, first in San Francisco, and then in other cities across the country.

When you download this free iPhone app, it recognizes your location via GPS and suggests which of 38 separate neighborhoods that make up this 49- square-mile city where over 800,000 of us call home might be yours.

“Neighborhoods are more emotional than physical, in many ways,” notes co-founder Stephen Hood. “So although Blockboard will suggest which neighborhood we think is yours, it’s up to you to choose.”

Once you decide what neighborhood you live in, you can begin building what is essentially a social network based on location. But, besides interacting directly with your neighbors (more about that in a minute), you also can use Blockboard to contact the city government about hyperlocal problems like graffiti, trash, potholes, vandalism, etc.

That’s because this startup is one of the relatively few to date working closely with the city’s Open311API, which allows developers to collaborative with the city to make government more accessible and responsive to its residents.

Blockboard’s senior engineer Ian Kallen says that “Today, cities are cash-strapped and can’t come up with all the initiatives that are needed on their own, like how to open up their data silos. They need help with it all, and San Francisco is one city really willing to do that in a collaborative way with companies like ours.”

Blockboard used the Mission District as its test basin, and discovered that one of its most popular uses was in its “Cityfix” category. Users alerted the city’s tracking system to all kinds of neighborhood problems, triggering an impressive response rate in most cases, which the exception of cleaning up the graffiti that persistently coats and recoats the neighborhood’s buildings, some of it artistic, some of it carrying deadly dangerous gang tags.

But let’s get back to that aspect of how Blockboard can help you get to know your neighbors better.

“Everyone cares about what’s happening where they live, but until now the ways they have to connect with neighbors is kinda ad hoc,” says Hood. “They might use mailing lists, or Yahoo Groups, which are fine, or they might place posters or notices on telephone poles.”

The problem is too many people just don’t talk to one another. In his trips around town to introduce Blockboard to various civic groups, Hood says, he always asked for a show of hands as to how many people actually do talk to their neighbors, “and it’s never more than a quarter of those present.”

Many of the options on the company’s iPhone app, therefore, involve new ways to help people talk to one another to find good food, upcoming events, playgrounds, playgroups, and babysitters or just to ask each other questions.

Users can choose to sign in with their social identity, i.e., through Facebook or Twitter, or they can create a pseudonym.  They also can provide as detailed a profile as they wish to.

“We think a lot about privacy,” says Kallen. “People vary in how open they want to be with their neighbors. After all, not everyone is a good neighbor. So we give people a range of choices as to how much they want to reveal.”

To spur San Franciscans outside of the Mission to try it out, Blockboard is offering the first five neighborhoods to reach 500 members $5,000 in funds each for a neighborhood-determined civic improvement project.

The company's team of four has deep experience in other local companies including Craigslist, Delicious, Technorati and Salon, and is backed by a group of blue-chip investors.

It looks ike it will be expanding into New York and Washington, D.C., and other cities with open government initiatives fairly soon.