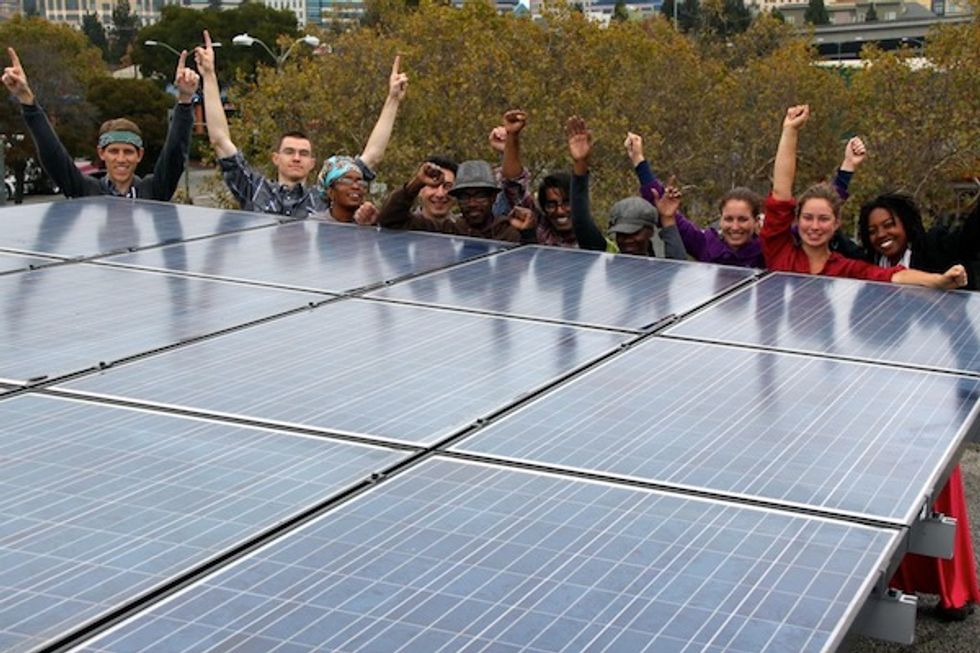 Oakland-based Mosaic, which provides an online platform for investing in solar energy projects, allows people in California to invest as little as $25 in such projects.

This unprecedented democratization of clean energy development is currently encountering some delays as regulators try to catch up with its highly promising and disruptive investment model.

The Mosaic team is led by people long active in clean energy issues, who have chosen to try a private sector model after years of frustrations at the non-profit, government and international levels in achieving meaningful climate change agreements.

If their initial successes with Mosaic are indicative, there is a large untapped demand among members of the public to vote with their dollars for solar power in California and beyond.

Last September, Mosaic announced with little fanfare an investment opportunity worth $40,000 to install solar panels at the Youth Employment Partnership, an Oakland non-profit, at an expected rate of return of 6.38 percent.

The response was immediate and overwhelming – within a week the project was fully funded.

Starting in January, the company launched several more investment opportunities focused on affordable housing around the Bay Area, all of which were fully funded within the first 24 hours that they were available.

To date, Mosaic has successfully funded eleven solar investments with over $1.1 million invested at expected rates of return clustering around 4.5 percent.

Although there are no projects currently available to invest in, Mosaic’s Lisa Curtis says, “We have more in the pipeline. We’re waiting on regulatory approval. We expect to have more up and available over the coming weeks.”

Investors have to be at least 18 years old, and can sign up online.  The company will inform them by email when new investment opportunities become available.

“The majority of our investors so far have been in San Francisco,” says Curtis. “The average age is 31 but they range in age from 18 to 95. Lots of them are younger, and active in the sharing economy lifestyle. They do not want a big house in suburbs and lots of stuff, they like to buy locally and they want to put their money where their values are–into things they care about.”

She adds, “People tell us that they like that it is a direct investment–they can see what their money is doing and where it is going. It has a tangible result.”

Each investment on Mosaic comes with a prospectus, making the risks and potential rewards transparent to people who may not under other circumstances qualify as investors in the classical sense. The estimated yields reflect the net after the company takes a 1 percent platform fee.

The company of 20 is headquartered at Jack London Square. Curtis says all 20 employees also are investors in Mosaic’s current solar projects.

Mosaic notes on its website that it does not fit the definition of crowd funding, which may be one of the concerns of regulators as they confront this new investment model.

“When you're doing something new, it's hard for regulatory agencies to grasp how to deal with you,” notes Curtis. “They are also wary of crowd funding – but we don't fit that definition exactly because platforms like Kickstarter are funding new projects and companies with a high rate of failure. Solar projects traditionally have a very low default rate.”

Mosaic’s approach to tapping into new pools of investment capital is just one of the forces propelling solar power to the forefront in California and beyond these days. Other factors include the falling costs of solar panels and the emergence of leasing options like those provided by another Bay Area company, Sunrun, which we will look at this Thursday.