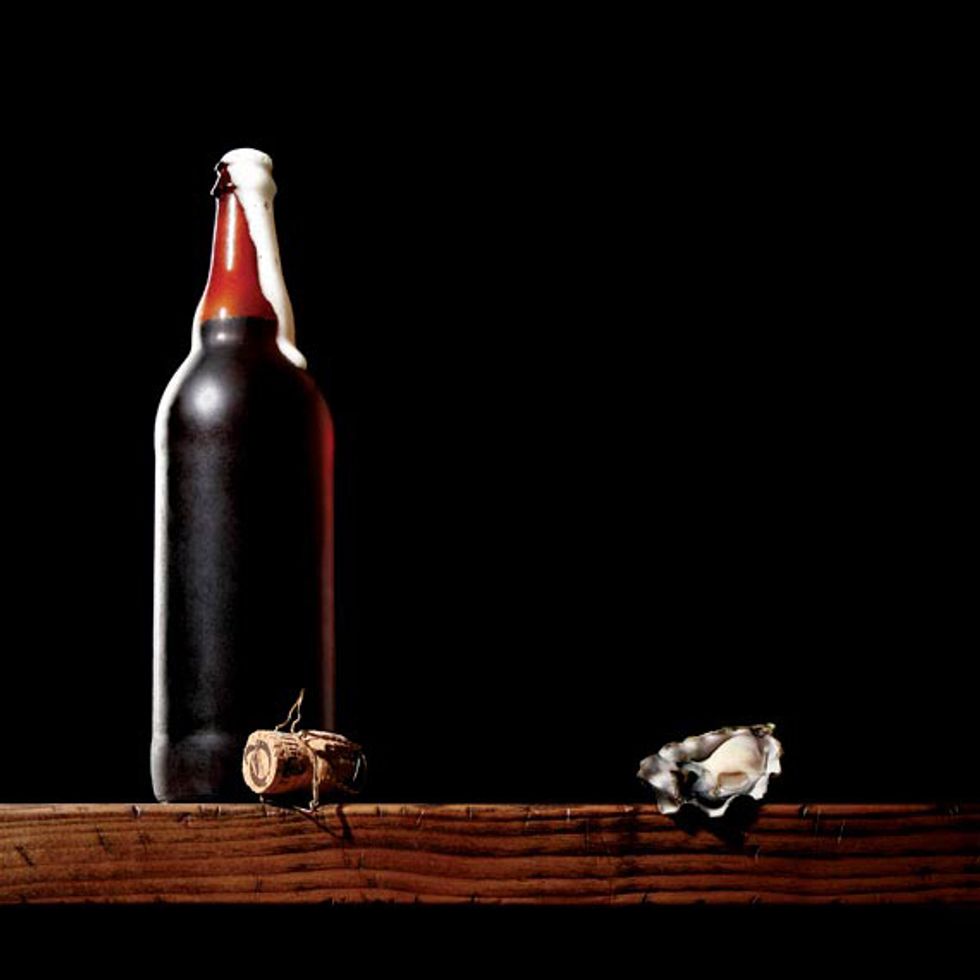 Move Over Wine, The Beer Bomber Is Here

If you’re looking for something to have with a tri tip, you might want to try this,” suggested Craig Wathen, the owner of City Beer Store in SoMa, as he handed me a .75-liter bottle of Sierra Nevada’s Ovila Abbey Dubbel off the shelf—a specimen big enough to contend with a bottle of wine. “It’s a hearty dubbel, almost chewy, but it’s got enough tartness from the hops to cut through the juice of a steak.”

Not to be outdone, on a recent visit to Bar Crudo in NoPa, my server Andrew Marcus placed a bottle of Supplication on the table. This brown ale, aged in French oak Pinot Noir barrels from the Russian River Brewing Company, was suggested as an accompaniment to the Pickering Passage oysters. “It’s my favorite beer right now. The sourness really goes well with shellfish or cream dishes, like our seafood chowder, in a way that wine doesn’t,” he explained, popping open the bottle and pouring my dining partner the first taste.

It’s not news that beer and food pairings are being taken more seriously, but as microbreweries develop original takes on classic styles, many craft beer brewers are following the path of vintners. Today, more and more beers are being celebrated for their regionality. They’re made with high enough alcohol levels to benefit from aging, conditioned in oak barrels, and naturally carbonated to retain the yeasty aromas. They’re sold in specialty stores by professionally certified staff, reviewed in magazines, graded on a 100-point scale, and increasingly packaged in meal-size bottles. Robert Parker might have to come out of retirement.

These larger bottles, affectionately known as “bombers,” range from 22 to 25.4 ounces. The largest model of the bomber fleet is the .75 liter—the standard size for a bottle of wine. The comparative size is deliberate. Marcus says, “Like wine, the larger bottles make it easier for two people to share. Lots of parties sample each other’s plates, and the larger bottles mean they have enough beer to split as well.”

Although bombers are more expensive than your run-of-the-mill six-pack, David Hauslein, the beer manager at Healthy Spirits in Duboce Triangle, has a reminder: For the price of an ordinary bottle of wine, you can buy an extraordinary beer. What a perfect justification.

This West Coast brewery out of Portland uses Saison yeast to make a barley farmhouse ale with a slightly bitter finish. Try it with Thai or Indian food. $13 (25 ounces)

A strong Belgian pale ale straight out of San Diego, it has an alcohol level of 11 percent and more spice than hops. It makes a good digestive. $15 (25 ounces)

This Belgian-style witbier from Orange County uses oats to add silkiness to the blend of malt and wheat. Lavender rounds out notes of coriander and orange. $10 (24 ounces)

A version of the Lost Abbey’s Lost and Found Ale, this big and heady Belgian dark quadrupel from the town of San Marcos gives a mouthful to savor. $13 (25 ounces)

Malty and Belgian-style, this brew uses old-world yeast to add notes of clove and pepper to the hoppy bitterness you expect from Sierra. $12 (25 ounces)