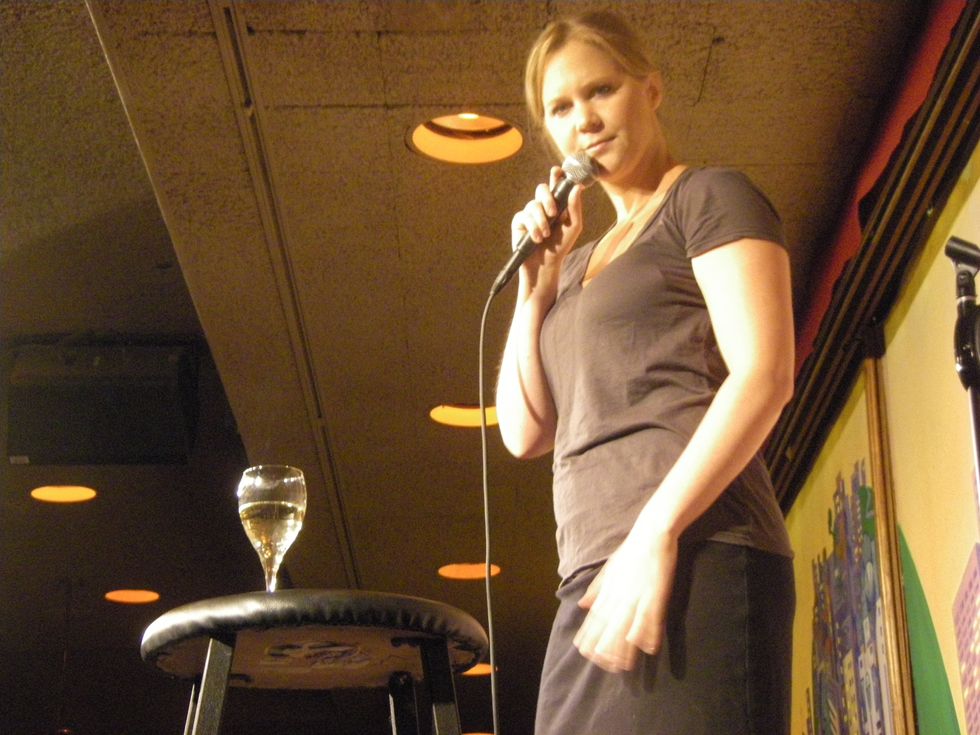 It’s been a surreal two weeks for Amy Schumer, the cunning girl-next-door comic who will, for the foreseeable future, be known as the standup who told Steve-O she would have preferred he die, rather than fellow Jackass star Ryan Dunn, at the Comedy Central Roast of Charlie Sheen. Her infamous joke has caught the attention of both angry Jackass fans and also the national media, and now the 30-year-old New Yorker is riding the crest of a wave of notoriety. It’s a double-edged sword, of course: she’s now selling out shows, but she also reported to be on the receiving end of death threats from the unamused.

“Who would have thought there were so many Ryan Dunn fans?” she nonchalantly told a packed house at Punchline Comedy Club Thursday night. “I thought I was just telling a joke.”

You don’t have to be a cynic to realize Schumer seized the moment, fearlessly delivering a coup of a performance in front of a national audience. We saw it again last night as Schumer turned up the bitch shtick, a persona not unfamiliar to anyone who’s ever witnessed the two-faced genius of Sarah Silverman or Whitney Cummings. Schumer has the vague innocence of Jenna Fischer’s Pam from The Office: blonde, sweet cheeks and visually non-threatening. She’s entirely comfortable in her own skin, and it’s clear Schumer’s conscious of her appeal. But beneath the surface... well, let’s go with her words: “I’m a Gemini, ya know: half nice, half monster.”

What’s most impressive is her versatility as a standup. She worked the crowd more than a handful of times, riffing with anyone who was game (and one couple that was not). She does this thing where she’ll ask an audience member a question and cut them off before they can get a clever word in, a common but tough-to-master conceit given the unpredictable nature of the exchange. It all comes across as stream of consciousness, though we’d be naive to think much of it isn’t calculated.

Schumer is loaded with one-liners, most of which are reserved for bedroom-related discussions — example: “My last boyfriend broke up with me because I wouldn’t swallow...but what am I supposed to do? I have a nut allergy.” But she can also tell a story, whether it involves relationships, being single, breakups, friendship or one-night encounters. Her punchlines vary from the surreal to the uber-sarcastic.

Her pop culture scope seemed limited, unless it’s reality TV you’re interested in. And she’s probably not one to get political or take on social issues, other than race. Which is fine. The Punchline crowd liked her just the way she is:  adorable, wry, and a self-described c-word.

Opener Steve Mazan is known best as the author and subject of the book and documentary Dying to do Letterman. Mazan was diagnosed with cancer five years ago yet is still standing, and standing tall on the standup circuit. His description of the Punchline venue was one of the best we’ve heard. To paraphrase: Yes I’ve been on Letterman, but I called my agent and said find me a venue in a big city where nobody is, but there’s still no parking, and make sure it’s on a roof of a parking lot, then have a bunch of kids draw their impression of the city behind the stage...

Mazan comes in the everyman mold, inconspicuous but equipped with wit well beyond what could be considered ordinary. A personal favorite: “Ladies, I am great in bed...I can sleep like 10, 11 hours without waking up.”

Fellow opener Jackie Monahan plays with expectations much the same way Schumer does, her irreverence well-disguised behind an easy-on-the-eyes facade. As one story went, she consulted a friend on how to get out of work in a corporate environment, to which her friend replied “just tell them you’re having women problems.” “So I told my boss, ‘I’m having an abortion.’ ”
And so it went Thursday.

All three comics will be back onstage tonight and Saturday at Punchline, for shows at 8 and 10 on both nights. See the Punchline calendar for more information.