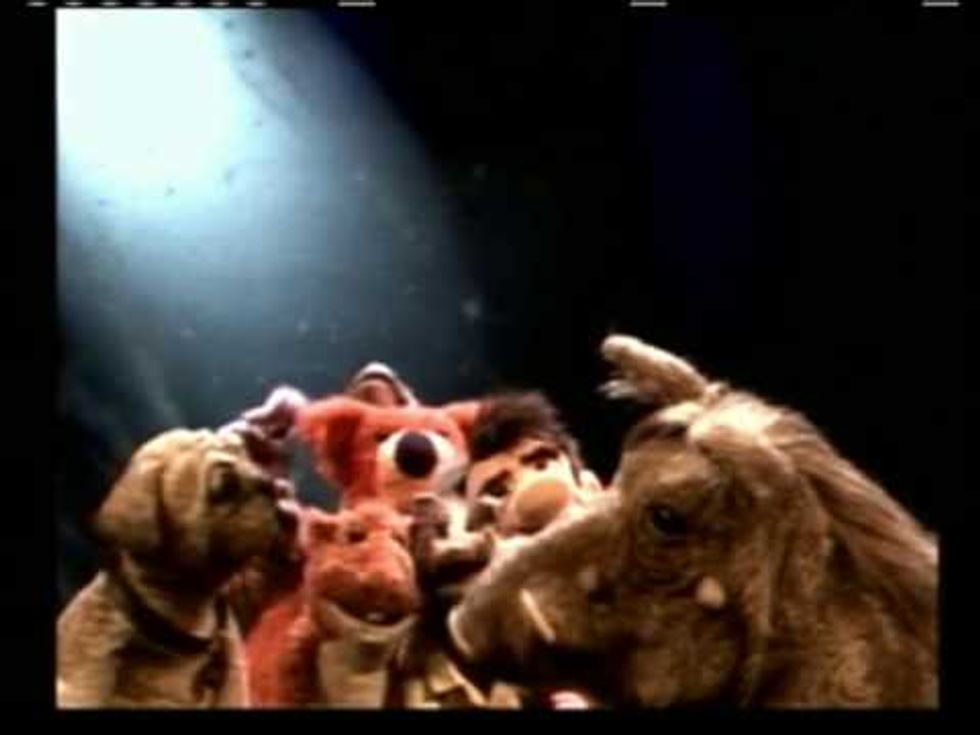 Not Your Children's Muppets: Brian Henson Discusses 'Stuffed and Unstrung'

Before the late, great Jim Henson was an empire, he was a person. A comic, in a sense. One who worked late-night TV spots on The Ed Sullivan Show and Saturday Night Live, riffing on anything that would make people laugh, without regard for demographics and ideas of parental guidance. “He was always doing puppetry for adults,” says son and now Jim Henson Co. producer Brian Henson. “Not exclusively adults, but that was his approach. So when he did Sesame Street, I think one reason why everyone loved it is because those are very sophisticated characters, and sometimes they’re being quite wry in a very adult way, and sort of naughty.”

Jim Henson’s Muppets would eventually go on to become one of the strongest forces in youth entertainment, capturing the imaginations of multiple generations of American kids, and the tradition continues today.  The ninth feature Muppets film — starring Jason Segel — hits theaters nationwide this fall, and beginning Thursday, local audiences will be able to see the Muppets in their raunchier form, in the spirit of Jim Henson’s original puppeteer ideology, as son Brian, along with SF Sketchfest, brings his show Muppets: Stuffed and Unstrung to the Curran Theatre this week. Henson recently took a moment to chat about the project and how it fits into the Muppet canon.

Where did the idea come from? Was this something you’ve wanted to do for a while?

It started a few years back when we thought it would be a good idea to start doing improv comedy work with our puppeteers. I met Patrick Bristow who was an instructor of improv and had worked with Groundlings and he said ‘sure I’ll give it a shot. It’s a little bit weird. It’s hard to do improv with puppets because my training is all about always watching the other performer in the eye when you’re working becasuse that’s the way you can read where they’re going,’ and I said ‘yeah puppeteers, we can’t do that.’ … So we tried and it was really fun and opened up a new comedic voice for puppets that’s very contemporary and a lot of fun and very smart, and we so enjoyed doing it that we put on a couple performances for writers so that they could start getting a sense of where we were heading with puppets for today.

And how did it take off from there?

In those performances there were producers of the Aspen Comedy Festival and they asked us to bring a show to Aspen and I said, ‘well it’s not even really a show, it’s more a training workshop but they said to please bring it anyway. So we went to Aspen, and from there we went on to Edinburgh, and then from there we went on to the Melbourne Comedy Festival and it was so popular as a live show that Patrick and I further developed it into Puppet Up, then it was called, and now it’s called Stuffed and Unstrung, which is a bigger more spectacular show, and it kind of just grew organically. There was no moment where we said ‘let’s create a great theatrical improv puppet show.' It just sort of grew.

What made it stick with audiences?

At one point, it got to be so funny that we said, ‘OK let’s make a TV show of this,’ and then realized in talking to people who were coming to see the show that they loved that they could either watch the big screen or the puppet show, where they could watch the puppeteers working center stage, and that they felt like it was two shows that they were watching, and both shows were riveting and so I decided this is really not going to be a TV show because the audience is so enjoying being in the room with it and deciding whether they were going to watch the puppeteers work or watch the puppets work, so it stayed as a live show and it’s been a lot of fun for us.

So is this the first time the puppeteers have been revealed in a public venue?

Yes, but we never really kept it secret or anything. In fact, my dad always very much enjoyed having visitors come to the set, and the people would always say I feel so honored, you let me see the secret and my dad would always say, ‘well it’s not really a secret, it’s just the way we work.’

Were there a few puppeteers who jumped at the idea of showing their face and being onstage, and conversely were there some puppeteers who shied away from this type of performance?

It’s not really like Avenue Q where you have actors who are puppeteering, whereas with this, we’re all up there doing our puppeteering. So actually, improvising itself is a very harrowing art form, and I think if the puppeteers are ready to try improvising — and a lot of the performers are not ready, it’s a tough thing to do to just go out and perform — but of the ones that were courageous enough to do the improvising they’re absolutely fine with going up in front of an audience.

Did they have training in improvisational comedy before this? Or is this their first go at it?

We trained them. We’ve also trained some improv comedians who wanted to puppeteer and in the company we’re bringing to San Francisco, three of them are that, and three of them are puppeteers who were trained in improv. It’s half and half. But in order to get into the workshops they have to be very experienced in one or the other and be very excited to learn the other craft that they don’t know.

Was the success of Avenue Q an indicator that there might be a market for this type of performance?

Well I think what Avenue Q did was point out that the dynamic of a show that looks like it’s for kids but has adult content in it can be a sort of delicious combination that the audience is ready to try and is open to. So certainly Avenue Q proved that and opened that up. Again, with our show because we didn’t initially set out to create a live show, it came about organically. We never stopped to wonder ‘Uh oh, I wonder if this will work.’ But certainly looking back you’d say ‘well what Avenue Q did is a show that looks like it’s for kids but then it’s a show that actually has adult content. That was the first puppet show that did that, and ours was the second, although our show kind of looks a little bit more adult, in the way that it has a certain grittiness to it. It’s much less polished than Avenue Q. It’s a wonderful sort of anarchic atmosphere that you’re in because it’s improvised. The show is going where we’re not even sure where it’s going sometimes. Which can be very exciting.

So this is obviously billed for more mature audience but it seems like the Muppets has always had a certain sophistication to it, or at least a sharp sense of humor.

It’s interesting, when we first brought it to New York, which was the widest audience to date, I was prepared for a lot of critics to say ‘Jim Henson would be rolling in his grave, they shouldn’t be doing this with puppets, but everyone pretty consistently said I love this show, it really captures the essence of the Muppets, that naughty, irreverent Jim Henson tone, and they’re not censoring themselves, and that’s exactly right. …In our show, it’s just more liberated, it’s more in-your-face. They really do say what they’re thinking, whereas with the Muppets (on TV) they don’t say it but you know they’re thinking it.

So did you father have a darker comedic side than most people realize?

I don’t think it’s so much dark. Our humor isn’t cynical or mean, it’s just uncensored. It goes places that are inappropriate for children. It’s still not mean comedy in the way that some adult comedies are. And my dad had a very naughty sense of humor, and in fact when I used to visit thte muppet shooting we always had the most fun when the puppeteers were playing off each other in a very adult way, after the director called cut. Or while they were rehearsing it would get very blue in a hilarious way, and in many ways I’ve got a show that’s kind of capturing what Henson puppeteers do when they’re playing around, which is the funniest part of what they do. Up until now we couldn’t really do that on camera.

There has also always been a musical sensibility to the Muppets. Is that going to be part of this show or is that too hard to blend with improv?

It’s tough, it’s the hardest to work in with improvising, but there’s quite a bit in the show. It’s very impressive. I’m not one of the better improvisers in song but the group that I’m bringing up with this show is.

Are you performing? What’s your role in the show?

Did you have a favorite charcter growing up and has that maybe changed over the years?

I get that question a lot and it’s tough. I’ve grown up with the Muppets all around me as a kid and I loved them all in diffferent ways. I used to just not answer the question, but in truth the character I loved the most was Kermit, because he really was very similar to my dad, so I always feel very comfortable with him and loved Kermit. And I also love the twistedness of Gonzo, so I guess both of them were kind of favorites.

And I’ve gotta ask, obviously with this Bert and Ernie controversy going on right now. I’m sure you’re aware of the push to have them marry on Sesame Street, and I’m wondering if you have any thoughts on that or if there have been any discussions in the company about introducing gay characters?

No there hasn’t been discussions. We’re not gonna comment on that, they’re just two wonderful characters. Sesame Street issued a statement. They can do whatever but they’re just wonderfully funny characters my dad created years ago.