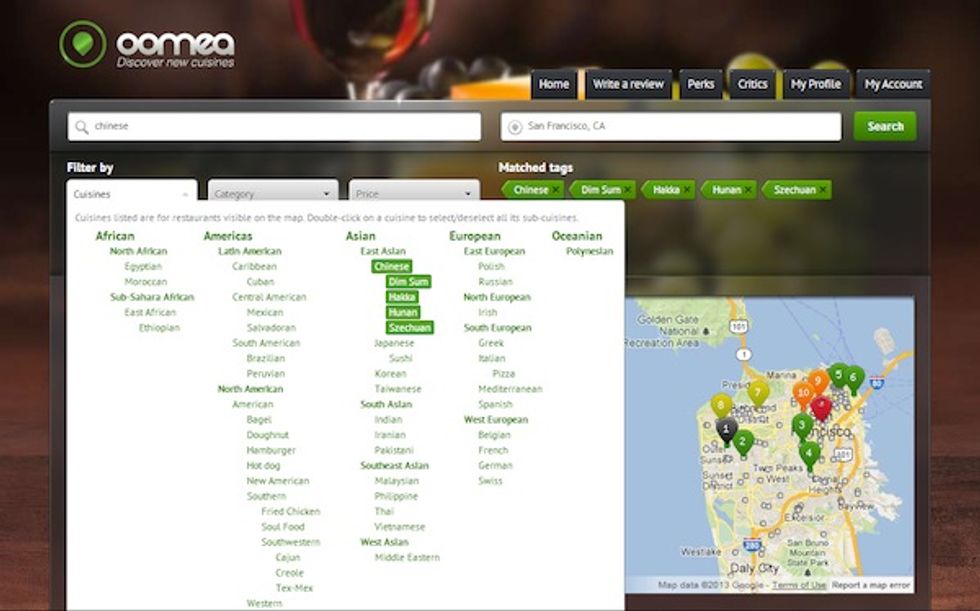 The San Francisco Bay Area is one of the world’s great regions for dining out, both in terms of the quality and sheer diversity of cuisines available here.

But when it comes to going out to restaurants, the people I’ve known have fallen into two broad categories – those who like to return again and again to a favored spot, and those who are more adventurous, always on the prowl for a new place or a new type of cuisine.

Oomea, which is launching today, is most definitely for the latter type of diner.

It is a reputation-based restaurant review platform that focuses on helping you discover new types of global and regional cuisines.

At launch, after a year in private beta, it can point you to some 50 national cuisines in the Bay Area, and some sub-national varieties as well.

Founder and CEO Benoit Spolidor told me the idea for Oomea sprang from a large dinner party he organized back in 2011.

“We had about 15 friends come over, and we talked about how San Francisco has such a wide variety of cuisines,” he told me. “It is not like that exactly in Paris, where I am from, where we mainly eat French food. Or in Germany, where my wife is from, and they eat mainly German food.

“At the dinner, people ate some food and drank some wine, and you know how a few drinks help people become creative, and the idea came up to challenge people to try new cuisines.”

Spolidor and his two co-founders, Joel dos Santos and Aurélien Amsellem, studied Yelp and other restaurant review platforms, and determined that there was room for a new option.

Oomea differentiates itself in a number of ways. Users sign in with their actual identity, via Facebook Connect or a valid email account, then create a profile, and gain visibility (and earn rewards) by posting reviews, liking reviews, or (most importantly) by gaining followers.

So how does it work?

“There are several important features,” says Spolidor. “First off, the cuisine discovery functionality. Reviewers are inspired to try new cuisines with a map of the world that appears on each reviewer’s profile. You can click on any country (and soon region/state) to discover what restaurant specializes in a specific cuisine.

Then, there is the reputation system, which has been led in beta by the food bloggers:

“We have created a reputation ranking system to prevent reviews from being gamed," says Spolidor. "The higher your reputation, the higher the impact of your reviews on a restaurant's ratings. A reviewer’s reputation is impacted by how many restaurants they have reviewed, how many followers they have gained and how many times their reviews have been liked.

“Restaurant ratings are the weighted average of the user ratings and their reputation, so they are more accurate.”

Oomea also incentivizes users to participate through a partnership with another startup with French origins, a*pour toi, to offer a gourmet food box to reviewers once they gain an early reputation level.

From a technological perspective, it’s significant to consider how a discovery platform like that at Oomea differs from a search paradigm, like that used by Google, Yelp, UrbanSpoon Open Table.

“They [Yelp et. al.] have the same structure and work the same way,” says Spolidor. “Typically, you have to enter a specific type of restaurant or cuisine to get suggestions. This is a search engine mindset: You have to know what you are looking for to get results.

“Users are not challenged to discover new cuisines and that's what we wanted to change. We also want to help people understand that cuisines are about a culture and a region, and how they relate to each other.”

Another key issue is the difference in quality between the anonymous reviews on the existing platforms and the reputation-based reviews on Oomea.

With anonymous reviews, as Spolidor notes, “it's a constant struggle for review platforms to remove what they consider spam, and that typically angers restaurant owners and genuine reviewers. As a reader, it's also hard to figure out if a restaurant is good or not so you end up scrolling through hundreds of reviews."

Oomea, with a team of five, is bootstrapped, and works out ofParisoma, a co-working space for early-stage entrepreneurs.