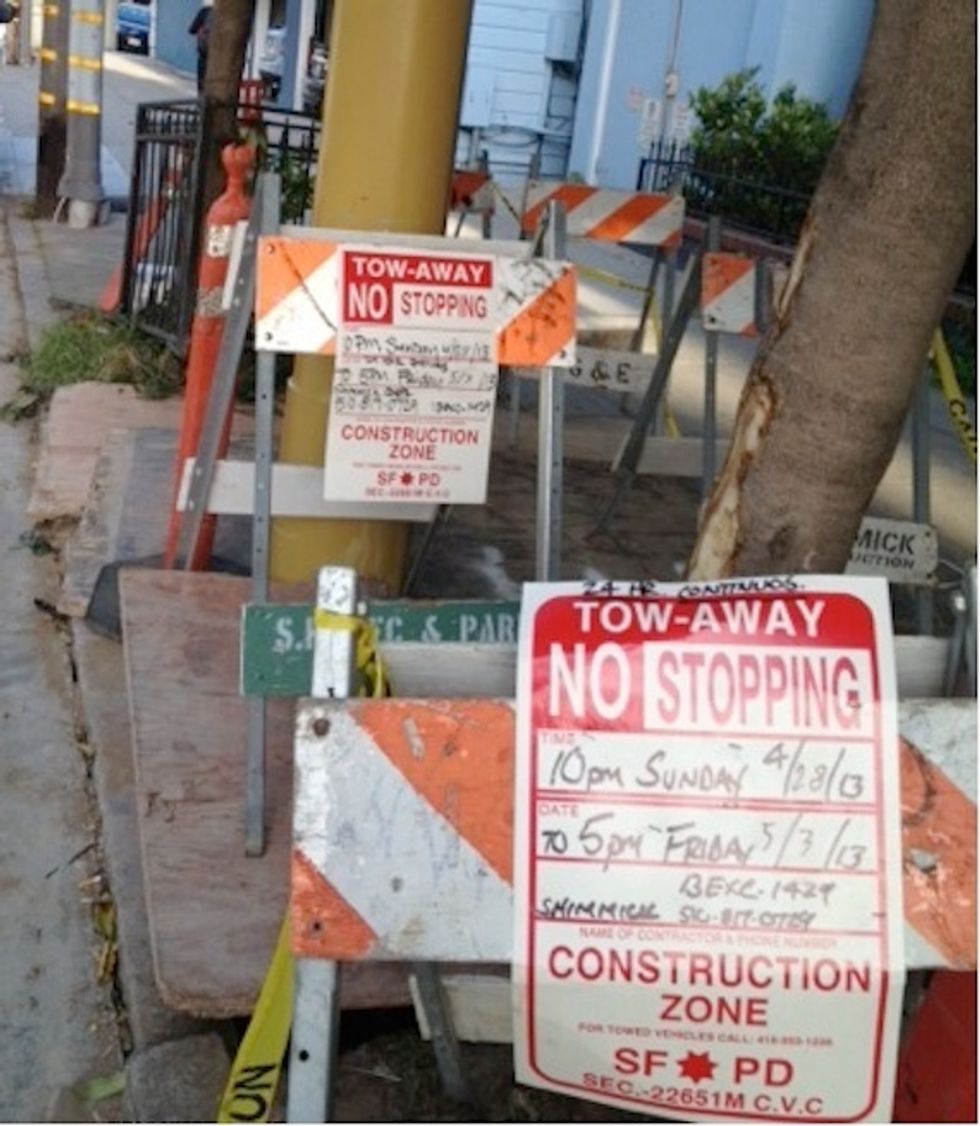 I am a big fan of your column on 7x7 and I appreciate all of your insights. I got towed the other night. The parking spot I found had some orange saw horses near the rear of my car. There was no signage on any of them. There weren’t any signs on any of the nearby posts. There were no signs, orange sawhorses, or cones in front of or next to my car. About one car length behind me there were saw horses with signage stating that it was a 24-hour tow-away zone for construction. I thought my car and the car behind me were fine. The next morning, my car had been towed. I immediately took photos of where my car was, the signs behind it, and the sawhorses without signage.

Did I mention that I was towed after working a twelve-hour night shift while seven
months pregnant? It sucked.

I have two questions: When I dispute the ticket and tow, do you think I should simply state that there were no signs or construction at the address listed on the ticket? Do you think I have a chance?

Thanks,
Pregnant and Towed

I have two words for you. The first one is "slam." And the second one is "dunk." This citation was improperly issued. Here's the law straight from the source:

Precisely where the last sign is posted constitutes the precise end of the construction zone. Your car was not in that zone.


So, your car should not have been towed from that space. I think you should request a hearing ASAP, show the hearing administrator your pics, and you will get your money back.

When you have received an erroneous citation, it’s always a good idea to take pictures right then and there. But, if your car has been towed, it’s difficult to present compelling photographic evidence of your imaginary car. And, when it’s after midnight, and you're pregnant, and your car is missing, your instincts probably aren’t telling you to whip out your iPhone and start taking pictures of nothing.

So, in situations like these, when I am parked legally, but think that the situation may be misinterpreted by a rookie parking officer and/or by misinformed construction workers, in order to protect myself, I like to practice what I call “Defensive Parking.”

I take pictures of the possibly misinterpreted “scene of the crime” before it is interpreted as a crime, just in case I have to defend myself against a citation later. Of course, this will be a moot practice once Google Earth releases Google Earth Real-time Video and everything that happens on the planet will be recorded. Just select the date and time, zoom in, and watch the video.

But even after Google releases GERTV, rules and laws will still be open to subjective interpretation. So if you want to go the extra mile, I recommend leaving a note on your windshield for the parking officer explaining the parking rules in this situation and why you actually are parked legally. I keep a set of pre-printed index cards in my glovebox just for this purpose. They seem to work, and the newer officers I’ve spoken with seem to appreciate the help as it is perhaps one of the toughest jobs to be in at an entry level. (I just made a new set, If anyone wants my old set of cards, let me know.)


While VoicePark has all of the static parking rules built into it and will only guide you to street-legal spots, we are currently working with city officials to incorporate the exact GPS coordinates and times that all construction zones, and special events are in effect, and this list will be updated daily. This information will be available for you the driver, and for parking officers. So, once that version of VoicePark is released, this situation will never happen again. And, when a construction zone sign is left up for several weeks after it is in effect, leaving a spot virtually unused due to fear of a tow, VoicePark will guide you right to it as though you are a seasoned parking veteran.

Thanks for sharing your story Pat. Good Luck.

To check out VoicePark, the mobile app that guides you by voice to the nearest available parking spot in real-time click here.