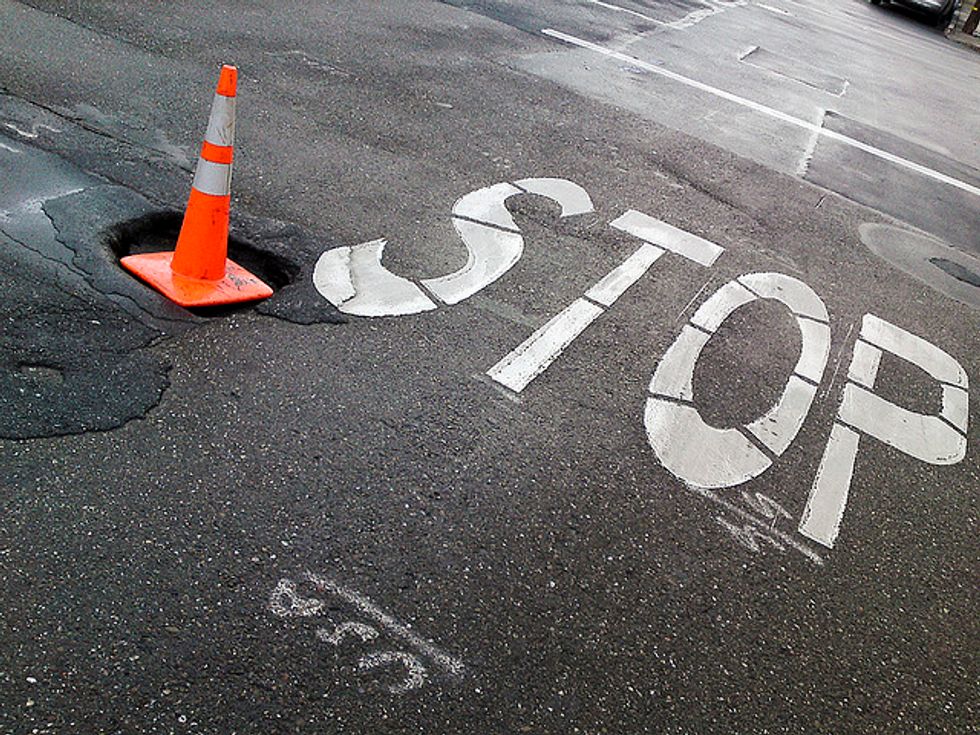 Right before lunch, we challenged you to rate SF's road conditions. Get ready for the answer, a bonus question, and everything you've ever wanted to know about potholes, but were afraid to ask. This is good reading for a rainy day!

What percentage of the streets of San Francisco are officially in "poor condition"?

For 5 Bonus Points: Where do the streets of San Francisco rank nationally?


B) Worse than the streets of Boston and New York

D) All of the above

E) None of the above

Answer:  D) All of the above

Everything You Ever Wanted to Know About Potholes, But Were Afraid to Ask

Is it me, or are there a lot more potholes out there?  I did some investigation, and determined that it isn’t just me.  There are actually over 2.7 gazillion more potholes today on our streets then there were last year.

Age, weather, moisture, traffic, heavy trucks, and delayed maintenance cause roads to deteriorate. Roads like ours that were built over 50 or more years ago with less sophisticated construction materials are reaching a point of exponential deterioration. Patching potholes here and there just doesn’t cut it anymore.  The problem is not just with the asphalt surface, but with the substructure of the roads.

The crown of a street and the emulsifying agents, together, beautifully work at repelling water only until there is a compromise in the pavement. Potholes (chuckholes, chunkholes, kettles, and tire-eaters by their aliases) are all formed basically the same way--traffic wear, old age, heat, and sunlight cause cracks to form in the water-repelling surface of the street. Once there is a crack, water seeps into the pavement, and erodes the sub-surface layers, creating an air gap or pocket below the surface. Water collects in this pocket and in colder climates expands and contracts in freeze-thaw cycles. In our more temperate climate the sheer volume of ground saturating water that we get in a short amount of time from the winter rains washes out the lower layers of stone and dirt, which support the surface layer. Then a heavy truck drives over the subsurface pocket and Voila!...a pothole is born.  That’s why so many of them appear in the Winter months.  And if left unrepaired, by springtime they’ve grown much larger.

A trillion dollars have been spent since the Eisenhower administration to build roads and keep them in working condition.  But the real problem is the aging substructure of the roads compounded by the growing amount of travel upon them.

A recent report by the American Association of State Highway Transportation states that,  “…despite the recent downturn in travel in 2008, the number of miles driven on the nation’s roadways has increased 41 percent from 1990 to 2007. Large commercial truck traffic, which places significant stress on pavements, has increased 50 percent during the same time frame.” But many roads, particularly in metropolitan areas and population growth centers, are in poor condition.  So, how do San Francisco’s roads fare?  Take a guess.

The San Francisco and San Jose metropolitan areas were tied for second worst in the nation behind Los Angeles.  Even Boston, the land of a million potholes, which even has a notorious pothole with its own Facebook page (I kid you not), ranks far higher than we do. 61% of San Francisco’s roads are in poor condition, 22% are fair, 4% are mediocre, and only 13% are in good condition.

TRIP, a national travel research group, estimates that for the average driver, roads that are in poor condition add $335 annually to typical vehicle operating costs. In San Francisco, the high concentration of poor roads adds an average of $705 to the maintenance of each vehicle.

But, there is a silver lining that makes San Francisco amazing yet again, and it can ease your pain. If your vehicle is damaged from a pothole or other road hazard, you can make a claim to the City Attorney’s office and be reimbursed for your expenses. I’ve done this…it really works. You must note specifically where the predatory pothole or hazard is, and you must show evidence of the damage. A claim must be filed within 6 months of the incident.

If your appetite for road knowledge is still not satiated, you’d like to know where the first asphalt road was built 4600 years ago, see a running total of the SF parking ticket revenue, or learn the best tips, tricks and secrets on how to find a parking place, click here.