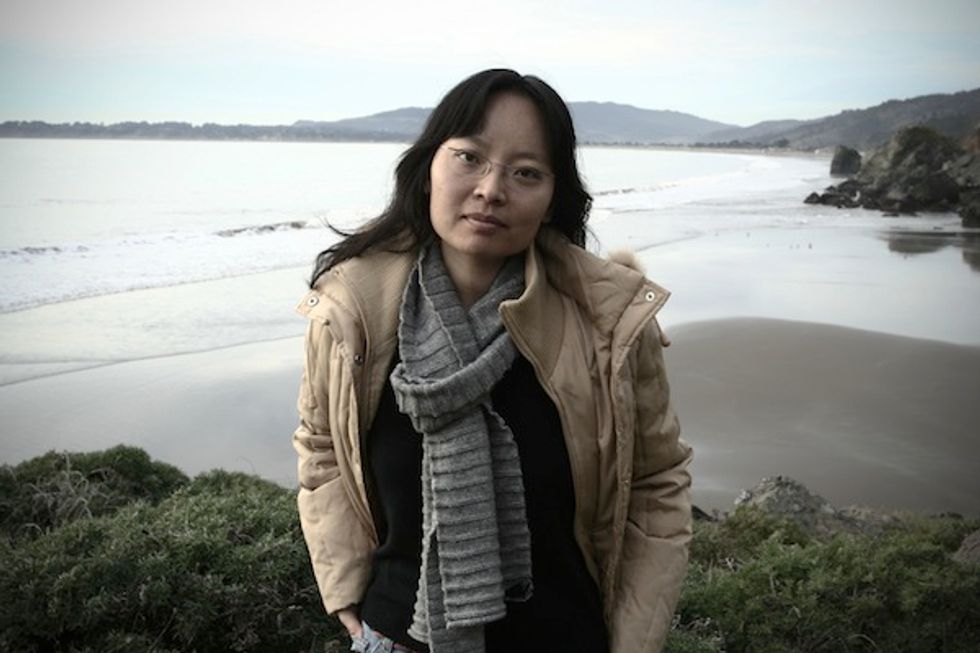 Hailed by organizers as a “Best Bet” for the 2015 Sundance Film Festival, sci-fi stunner Advantageous may just be the festival’s most uncommon example of art imitating life. Born in Berkeley to Chinese-Malaysian and Vietnamese parents, San Francisco filmmaker Jennifer Phang’s much-anticipated feature explores extreme sacrifices made by parents for their children, albeit set in a haunting dystopia 25 years in the future.

Six years after making her feature film debut at the 2008 Sundance Film Festival, the San Francisco Film Society resident returns a 2014 frontrunner for the prestigious U.S. Dramatic Award — won two years ago by Bay Area acclaimed Fruitvale Station. Phang, a Sundance Feature Films fellow, recipient of the Sundance CineReach grant and winner of the Tribeca Film Festival/L’Oreal Women of Worth Award, speaks of SF’s influence on the socially-driven and technology-laden film, and how even the strangest of fictions are not that far from home.

EI: From 2008’s Half-Life to 2014’s Advantageous, your films about single motherhood have now paved your path to Sundance twice. What is it about that relationship that sits so close to your heart?

JP: (Co-writer Jacqueline Kim) and I wanted to look at a woman who was highly capable in many areas and wanted to help her daughter reach her full potential. I’m inspired by parents in general — my own parents, my friends who are parents, parents on the subway who interact with their children in so many different ways. My mother was an inspiration — her fortitude and determination to provide a safe environment for me while practically being a single mom, because my father had to be abroad in Malaysia. She really established a foothold for our family after coming here from Vietnam, and there was so much responsibility on her shoulders. She worked three jobs at once, and the only time she could sleep was when I was at school. She wanted to establish life on her own terms, and to make sure I had as many opportunities as possible.

Jacqueline and I discussed in depth our experience with our own mothers and imagining what it would be like to be a mother in the future. Someone trying to do it all, to work and find fulfillment as a mother. In the modern world, I see people trying to do everything. Women want to be the ideal woman and the ideal mother at the same time, which is admirable, but depending on what kind of support system or resources they have, that mindset can present big challenges.

EI: What was the intention of setting such current ideas — emerging technologies, class tensions, the idea of women “having it all” — in such a different world than the one we live in?

JP: Though Advantageous is set somewhere in the future, certain elements of the film feel like it could be taking place right here, right now. I like creating and losing myself in alternate worlds — it’s part of the pleasure of making film. I wanted to imagine what kind of world would push someone to make the extreme choice to engage in radical technology to improve the life of her loved ones. And in near-future economies, when the class divide widens significantly, what does that mean for the future of women? What does that mean for the position of men? In the Bay Area, we’re in a place where being a feminist, a person who cares about women’s values and equality in society, is entirely accepted. Living elsewhere, that’s not the case — I’ve found myself in certain interactions wondering if I was slipping back in time. In the future, will we be going to go backwards or forwards in how we see a woman’s value to society?

EI: Feminism is the first of many social challenges explored in Advantageous. How did your Bay Area upbringing influence your handling of the film’s other pervasive issues, like income gaps?

JP: When I started seeing homeless people in SF when I was little, it naturally struck me as unfair and really sad. When I was in junior high I wrote an essay about it and gained some recognition, and it made me realize it wasn’t just something I was concerned about. I started looking at the subject more closely, because the natural instinct for most is to want fairness and equality. But we also let our culture convince us it’s not possible.

EI: Speaking of SF’s “core system,” what about the omnipresence of technology in Advantageous?

JP: The film looks at the positive and negative effects of our dependence on technology. As someone who lives in the Bay Area, you’re always near the cutting edge of technology, and it saves you time, but it also takes time away from you. My film looks at what’s valuable — is family valuable? Is progress valuable? There’s a tension between wanting to be ahead of the curve and wanting to slow down and embrace things from the past. Our characters spend a lot of time with near-future technologies, but also with functional items that don’t involve computers, like pianos, dancing, and pens.

EI: In the film, your main character tells her young daughter that “It’s good to be humble, but you need to know your value.” Is that a lesson you learned from your own life?

JP: I value humility a lot. I naturally respond to humble people. Asian women are often taught that to be a good person and a good daughter you need to defer most of your needs to other people’s needs, and that’s something I struggle with — it’s very much at odds with contemporary values for both women and men. It’s taken awhile for me to realize that all the hard work I put into directing and screenwriting was actually going somewhere, and that there is value in the work I’ve done and the work inside me.

There’s this weird way we’re brought up to feel like we’re just a product of other people’s kindness, to be told by society that you’re just lucky, that you’re just fortunate to be in your position, that if you’re great at your job it’s because other people supported you. It’s important to know that your value is in the effort you put into life, and that you can balance other people’s needs with knowing you have a role to play in this world.

EI: You’re back in SF after a stint in New York filming Advantageous. Were any Bay Area haunts on your mind during your time on the opposite coast?

JP: I missed talking with friends at The Pub in Albany, and for food, Burma Superstar. I love the outdoors, and New York took care of that with Central Park, but it’s not like Tilden Park or Angel Island. I have a connection with the ocean that inspires my aesthetic, so I find solace being by the ocean in Monterey. And every opportunity I have to go to Yosemite, I go.