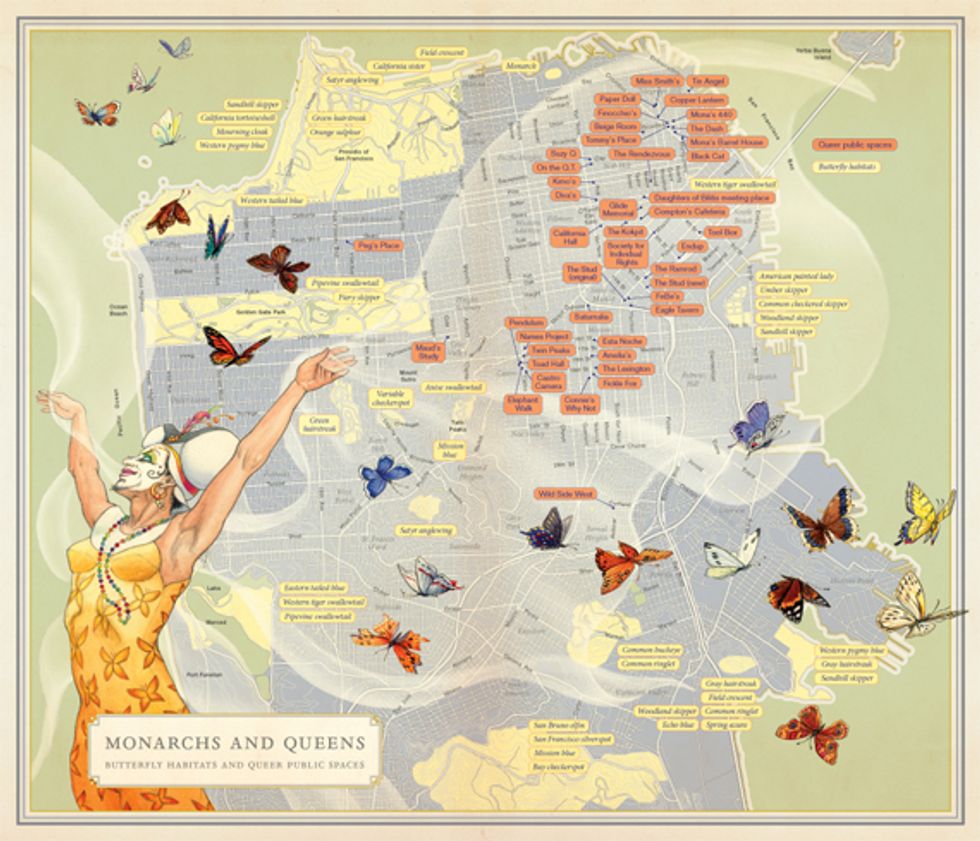 "I wanted to make maps gorgeous, seductive, delicious, and beautiful again,” says author Rebecca Solnit, whose 13th book, Infinite City: A San Francisco Atlas (UC Press) will be released in November. “Cartography used to be both an art and a science. I wanted to return to that.” Solnit’s career up to this point—she has authored books on topics as diverse as human response to disaster, getting lost, and wanderlust—prepared her to create an atlas that maps her specific experience with the city she has called home her entire adult life. Solnit collaborated with 27 writers, cartographers, designers, researchers, and artists to create 22 full-color maps that offer whimsical, insightful views of the city, along with essays that expand on the sometimes-surprising juxtapositions within.

Another, “Poison/Palate,” plots toxic mines and factories in the Bay Area alongside farmers markets, farms, and artisan food producers.

The multilayered maps are intended to be provocative. For example, her map of the Mission, which is paired with first-person interviews from residents and day laborers, draws the United States-Mexico border at Cesar Chavez Street.

“I chose 22 ways to map San Francisco out of a million possibilities,” says Solnit. “It’s like that old expression: A poem about something ugly can still be beautiful. A map about murder or urban redevelopment can still be beautiful.” Solnit’s research assistant, Stella Lochman, helped her collect data from a rich group, from salmon experts to a handful of San Franciscans who’ve lived in SF nearly 100 years. Mapping the city with their help not only expanded Solnit’s own sense of place, but it also revealed to her the popularity of cartography. “Maps make people happy,” says Solnit. “They show where you are, and people like to know that.”

The atlas was also an attempt to reclaim an art form, offering an alternative to Google Maps and GPS. “Those maps confirm a certain reality,” she says, “but not the only reality.”

Throughout the project, Solnit received significant support from SFMOMA. Since July, she and her collaborators have been hosting public events, introducing a new map at each one. In October, two events will deal with identity-informed maps. In January, Solnit will be in residence at the University of Wyoming, where she plans to begin work on a second collaborative atlas. She hopes there will eventually be a series of atlases in this style, each mapping a different reality in a different town. “I called the book Infinite City because there are countless ways to consider a place,” she says. “It’s the atlas that’s finite—there is always more.”


Rebecca Solnit speaks Oct. 7 at SFMOMA for the release of the “Who Am I Where?” map and on Oct. 9 at Mission Cultural Center for Latino Arts as part of Litquake for a night of readings and anecdotes about SF.