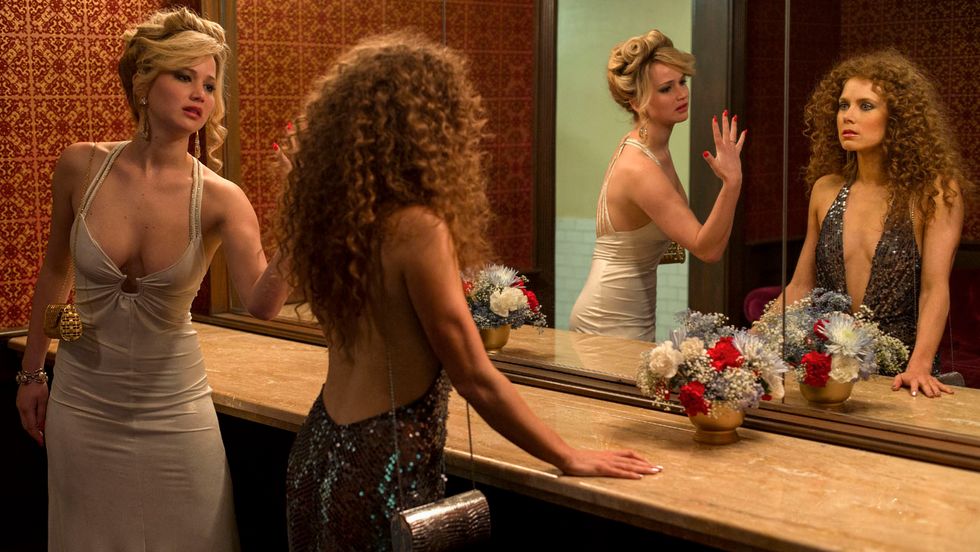 Return of the Badfellas (and Ladies): Seven Films to Watch This Week

Usually critics are one film behind. In the case of David O. Russell's American Hustle, it appears they're one film ahead for a change. The shower of accolades that fell upon Silver Linings Playbook and culminating in Jennifer Lawrence's surprising Oscar win probably should have been saved for this year. Where Silver Linings wasn't quite there yet, American Hustle is all the way baked--Jennifer Lawrence is both delicious and unflappable as the wily wife of small-time con Irving Rosenfeld and Bradley Cooper finally steps away from his hero persona,  comfortably stepping into his new niche as a control-freak para-psychopath as glory-hound FBI agent Richi DiMaso.

As many critics have already mentioned, the con-vs-con plot of American Hustle is straight from the Scorsese playbook: Small-time con gets in over his head, but steps up to the bigtime (with much trepidation) and pulls it out in the end, girl intact. Christian Bale's reedy voiceover has made Goodfellas the go-to critical reference, but American Hustle's memorable hamming and tragic glamour probably have more in common with his Casino, as does the subject matter. A period piece writ broadly with a Saturday Night Fever soundtrack, Russell and Eric Singer's script is tight, but hits all the obvious highs, loosely built around the Abscam scandal (check out Vulture's interesting breakdown of that here), a famous FBI sting that led to the arrest of a few prominent politicians for corruption.

There's been a strange wind blowing through some of this year's biggest films that's a testament to the transformative power of good acting. In the same way that Cate Blanchett transformed Woody Allen's Blue Jasmine from a crotchety comedy into something entirely more terrifying, Bale, rocking his played-for-laughs combover, sizable paunch, and posture that would make chiropractor cry, turns in a performance that ratchets the tension up to tooth-grating levels despite cheesy outfits and the almost-too-rote scenario. In terms of the support, there's not a flaw to be found: Amy Adams, strapped up in period-authentic body-hugging fashion, provides the film's grounding; and Jeremy Renner, as a bouffant-wearing New Jersey mayor Carmine Polito, oozes charm and humanity. American Hustle is easily David O. Russell's best work, and it just might be the most exciting and watchable big budget film of the season. Rotten Tomatoes: 95%. Bay Area theatres.

Inside Llewyn Davis - As the legend would have it, there are Minor Coen Brothers films and there are Major ones. Supporters would argue that a Rembrandt is still a Rembrandt, but Inside looks more like the neurotic realism of indie light Alex Karpovsky (who cameos briefly), polished and perfected. The result would be amazing for him, but seems weirdly undercooked for the Coen's powers. Rotten Tomatoes: 95%. Sundance Kabuki.

Go For Sisters - Workhorse director John Sayles delivers again with this tightly wound thriller surrounding the disappearance of of a young black man and his mother's search for him in the Mexican underworld. Rotten Tomatoes: 72%. Opera Plaza Cinemas.

Die Hard - With this year's entry, Die Hard 5, topping 'worst movie' lists everywhere, it's nice to be reminded that once "Yipee Ki Ay Motherf*cker" used to sound good, even if it's not the winter wonderland of Die Hard 2. Rotten Tomatoes: 92%. Clay, Midnight Friday and Saturday only.

Home for the Holidays & Love Actually - Holly Hunter's too-close-for-comfort family comedy makes a spooky pairing with this UK schlock-fest. If you hate your family and you'd adore being swept off your feet by a charming British chap--perhaps one that is known to frequent prostitutes--this is your jam. Rotten Tomatoes: 63% (both!) Castro, Friday only.

White Reindeer- Zach Clark's christmas romp about a (slightly) unhinged real estate agent whose husband has just died has all the ingredients of a cult classic in the making--drugs, strippers, shoplifting and a twisted take on holiday merriment. Rotten Tomatoes: 92%. Roxie.

Anchorman 2: The Legend Continues - As the marketing line traditionally goes: You asked for it, Now it's here. Hopefully it's not too late. Rotten Tomatoes: 75%. Bay Area Theatres.