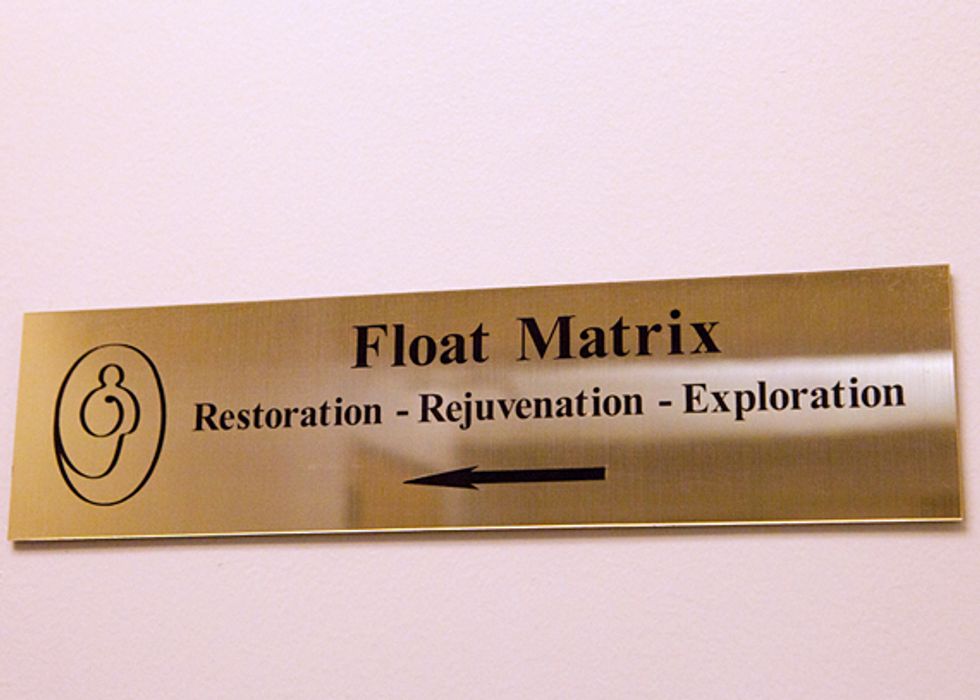 Return to the Womb at Float Matrix

A good float is sort of like the last 5 minutes of yoga class when you lay on your back and thank yourself for taking the time to do yoga…while simultaneously napping on your favorite couch and wading in warm, tropical salt water. It’s that good.

Or as Kane Mantyla, owner of the Float Matrix, describes it, “It’s the only technique I know that allows us conscious access to the subconscious. It’s like you’re dreaming. But you’re not. You’re wide awake.”

Talking about floating is kind of like talking about romance, or your dreams. It’s so gosh darn genuine, and there’s that cynical, jaded part of you that really wants to snicker and poke fun. But the wide-eyed believer in you can’t help but really, really want to give it a shot. So I gave it a shot.

I went to the Float Matrix fully prepared to willingly suspend my disbelief, if you don’t mind the pun. Kane sits at the desk just inside the main lobby and greets everyone as they prepare for their floats, setting them up with towels and robes, and answering any questions they might have.


“It’s taken me a long time to even learn how to talk about all of this,” Kane explained to me. “Floating is a lot like experiencing ‘nothing,’ and there is no set narrative for ‘nothing’ in our culture.”

But he tried to explain and I tried to understand, as we sat there and I sipped the water and snacked on the granola that he provides to all his customers.

“But of course that is not what happens. The stream is not steady; it’s slow, forced, and chaotic. Now if you hold the bottle at an angle, and let negative space into the bottle, then the water flows out quickly, but also smoothly, and harmoniously. You need that negative space. And floating is the negative space.”


It makes sense to analogize floating to the negative space in life. You are suspended in water with 800 pounds of Epson salt in it, so you are incredibly buoyant, and feel totally weightless. Once you settle into the flotation pod, it’s pitch black, so sight is pretty much eliminated. There’s no sound in the flotation pod. The water itself is heated to 93.5 degrees, which is the temperature of your skin, so you don’t even really feel the water. You’re just, well, floating...in what feels like nothingness.

Nothingness is the whole point. In fact, as I was just about to duck into the flotation pod for the first time, Kane cautioned me, “Nothing happens in there. Some people wait in anticipation for something to happen. But there’s nothing. The nothing is what is happening.”

And I have to say, nothing feels pretty damn good, especially in a world where I spend my nights watching the Giants on TV, with my laptop open, while texting friends on my phone, and trying to have a conversation with my wife, who is doing the exact same thing that I’m doing.

We don’t put much value in nothingness. Which is probably while it felt so unbelievably liberating. There is no agenda in the flotation pod. The utter absence of stimuli allows you to unwind and integrate at a fantastic pace.

I floated twice in a week—an hour the first time and 90 minutes the second. Most first-timers are recommended to try it three times, in order to get comfortable enough to let go of the anticipation of something happening. Most of Kane’s regular clients float once every other week, although some are far more consistent. One guy comes in twice a week and floats for around 4 hours each time.

For my first 60 minute float, it felt like maybe 30 minutes. I was giddy at first. It was so fun to be weightless. But then I settled in, and thought for a while, but without really trying, I let go of thinking, which is when it got really good. I snapped back into giddiness after a while, and just as I was settling back into nothingness, my time was up.

Even though the second float was longer than the first, it actually felt shorter, which is probably because I was able let go for even longer. Both times I stepped out of the pod feeling almost absurdly peaceful and relaxed, wanting to do nothing more than just sit in a park somewhere and be happy and grateful.

From the outside, it’s pretty easy to make fun of floating. And you’re welcome to do so. But it’s much more rewarding to allow yourself the naïve curiosity to give it a try, settle back into the warm water and experience the immense joy of nothingness.