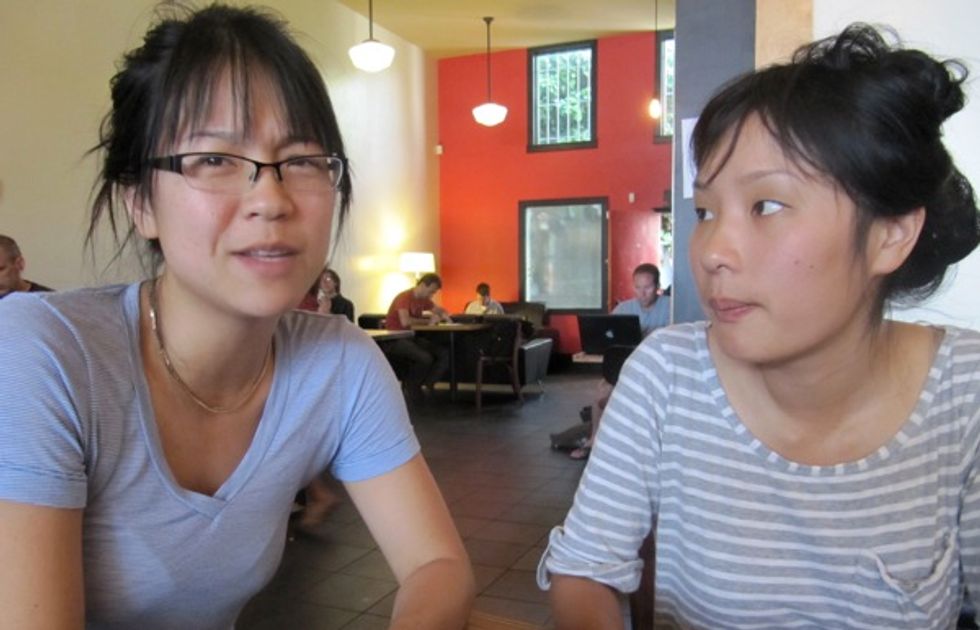 At first glance, the two 20-somethings talking excitedly in a Mission District coffee shop may not look like renegades at the vanguard of a new food revolution, but that's exactly who they are.

Local food bloggers Katie Kwan and Valerie Luu will be taking their Vietnamese pop-up cafe, Rice Paper Scissors, to the streets for the third time this spring, on Friday night, May13th, at an as-yet undisclosed location.

In order to find out where they will break out their signature little red stools and spontaneously start serving their savory dishes, you'll have to follow them on Twitter or plug into one of local foodie blogs in the know.

When it comes to grassroots innovation in San Francisco, however, there's no better example than Rice Paper Scissors, which has no investors, angels or even a fixed office address.

The two friends favor the MoJo cafe near Alamo Square as their unofficial company headquarters, although they also show up at the Summit cafe or Ritual Coffee along the bustling Valencia Street corridor -- which is also where they stage their pop-up events.

As for their technology choices, they rely on Google Docs, Mailchimp, and the San Francisco-based Evernote mobile app, which serves as their institutional memory as they move about town, buying ingredients, scouting locations for future events, and keeping track of their expenses.

"Evernote helps me remember all that stuff," says Luu. "It's how I deal with my anal-OCD-ness. This way I don't lose our ideas."

The dishes Kwan and Luu cook come straight out of the street vendor tradition in Southeast Asia, particularly Vietnam. Things you're not going to easily find, like 1000-year-old egg, handmade pate, chacuterie banh mi, snail pho, duck confit, as well as fresh green papaya salad and home-made imperial rolls. Or -- if you are willing to pre-order, a speciality dish like sticky rice stuffed quail.

Kwan's favorite place to gather the fresh herbs and other ingredients in her dishes is May Wah on Clement Street. Luu's is the Manila Market in the Excelsior. They also pick up special items like the three distinct types of palm sugar at the Vietnamese shops in the Tenderloin.

The women share a set of common passions and perspectives that have led to the creation of their minimalist, street-focused movement.

They are part of the larger underground food community in the city, which has partly arisen due to the persistent recession that has largely locked their generation of college graduates out of jobs or more traditional careers. The center of this community is the SF Underground Market, which now attracts over 40 vendors and some 3,000 customers to its occasional night gatherings, also in the Mission.

These are vendors without the requisite city permits or expensive liability insurance policies that make breaking into the sanctioned food industry prohibitively expensive for young entrepreneurs. "These days you can't just wait around, says Kwan. You have to create your own opportunities."

For their part, city officials have chosen (wisely) to look the other way and allow this promising new movement to flourish free of bureaucratic harassment -- so far.

Both of the pop-up cafe guerrillas are first-generation immigrants -- Kwan's family came from China, via Hong Kong and Taiwan; Luu's from Vietnam.  The tradition of preparing and serving food is deeply ingrained in their family and cultural traditions.

"In Asian cultures, food is 90 percent of life," says Kwan, who is 26. "My Dad has always really been the one in our family who's into food. It's amazing how he can bring everything back to food, for instance to just one shop in Chinatown with octopus hanging in its window. If the economy is good, he says the shopowner has three of them; if it's average he has two; and when the economy is bad, like now, he has just one."

Kwan took an extended trip to Vietnam last year, traveling the entire country to visit nine different cities in order to experience the many regional differences in that country's cuisine. One elderly woman she encountered in an alley in Saigon introduced her to the authentic local version of the 1000-year-old egg dish that was a highlight of Rice Paper Scissors' second pop-up event at the end of March.

"We do this the way we do because we don't just want to cook and then sell people food and have them go away," says Kwan. "We want them to stay and make it fun. Cooking can be very lonely otherwise."

The 23-year-old Luu grew up surrounded by at least a dozen cousins at huge family gatherings in the South Bay that always centered around food. She is a journalist by choice and one who hopes to capture her immigrant family's unwritten history through food.

"Food is the way to get into our story. It's also the way my family can understand what I'm doing. They don't get social media, they don't really get journalism, but they get food -- I've never seen them get as excited about anything as they do about food."

Luu  learned how to cook at her grandmother's side, and a big part of her current direction is an attempt to rediscover and integrate her Vietnamese identity with that of a modern American woman.

"I think that a lot of Vietnamese-Americans -- a lot of Asian-Americans generally -- tend to push away their culture as we're growing up, and in the process we lose a sense of ourselves. I'm documenting my family's story and sharing it through our food."

Both women feel a keen sense of the value that comes from people gathering on the street. "In almost any other country, people spend a lot more time on the street," says Kwan.

"The pop-up cafes are a way for people to just kick it, hang out, live the life," adds Luu. "There is a sense of discovery, it's fleeting, here and then gone, once we pack up the stools and go."

She's also clearly seeking a deeper connection, one tinged with an ineffable nostalgia familiar to every immigrant. "I yearn for a sense of home that isn't home, but still is, in a new way. I hope that whenever people see those little red stools they will think of us."

Valerie Luu's blog is at Little Knock and Katie Kwan's at Kitchen Sidecar.  Their Twitter feeds are @littleknock or @kitchensidecar.