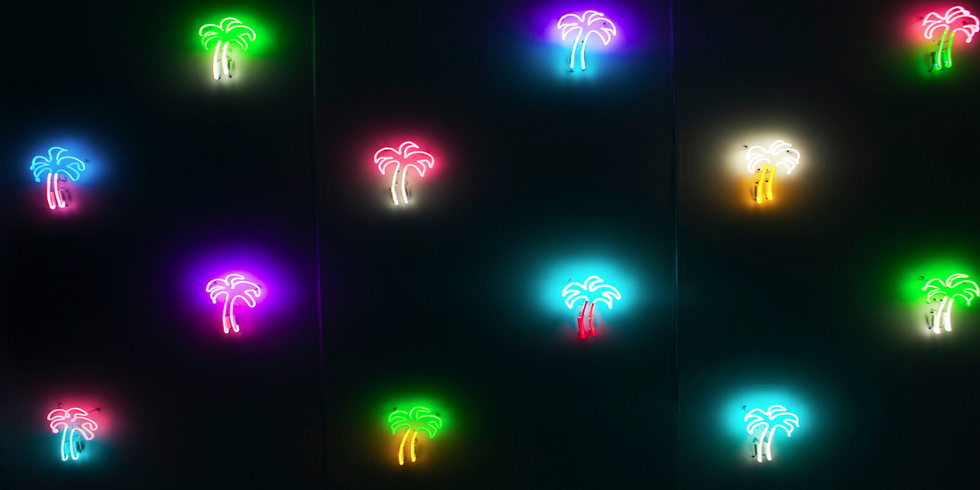 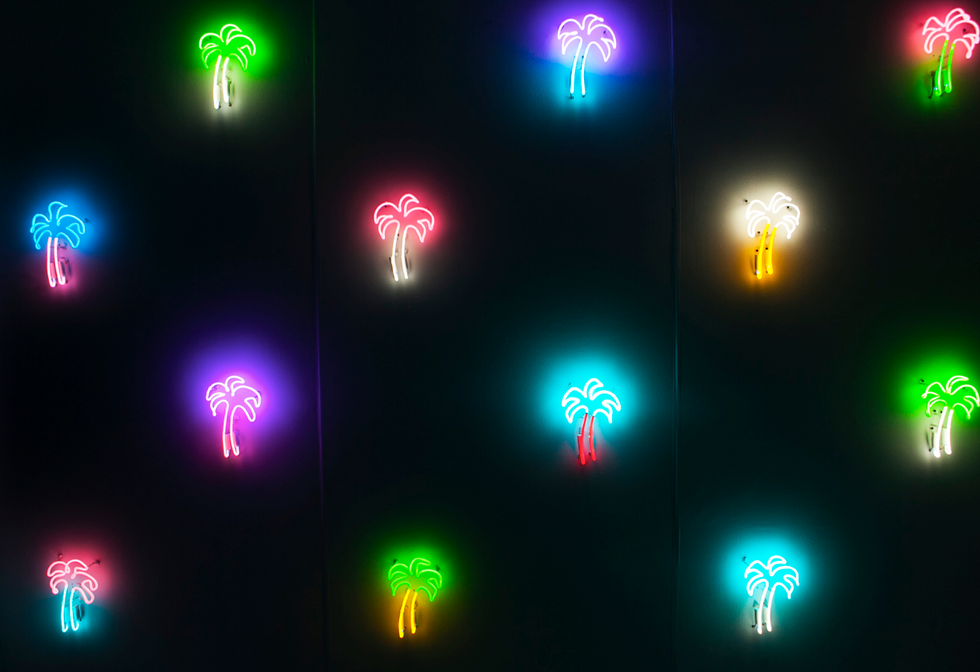 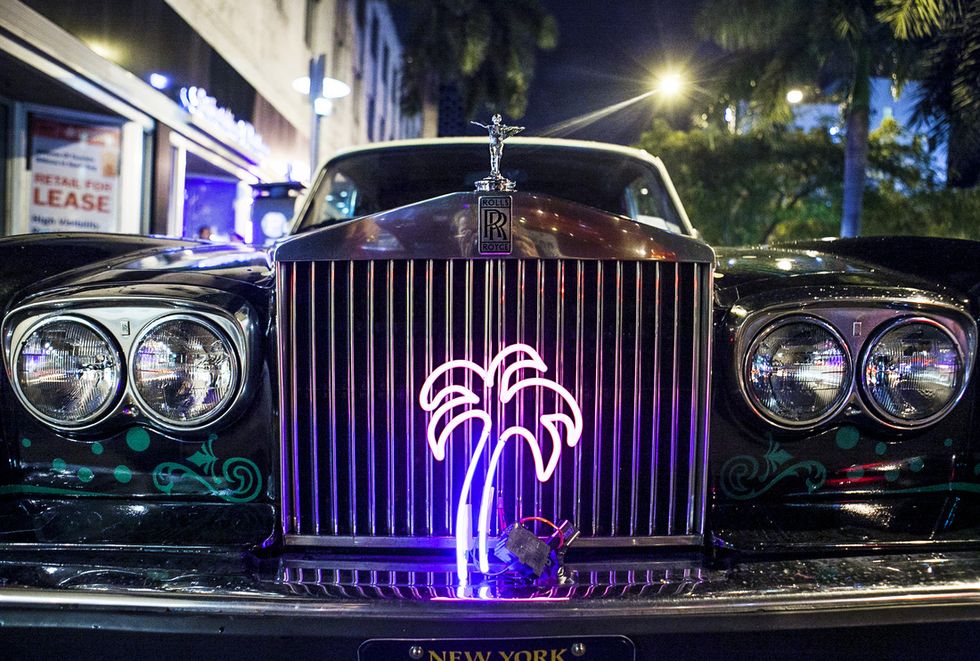 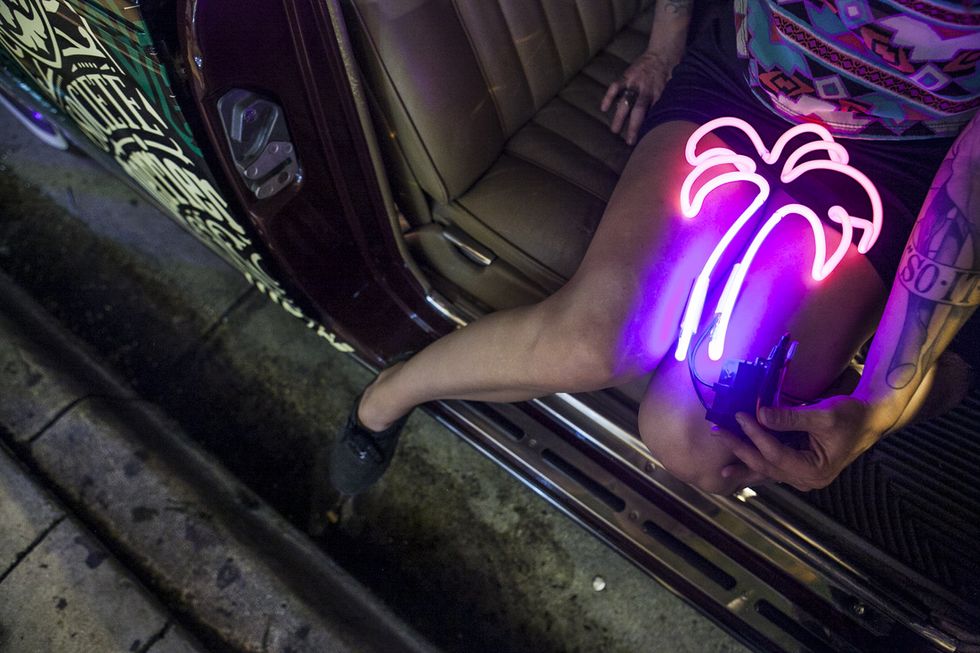 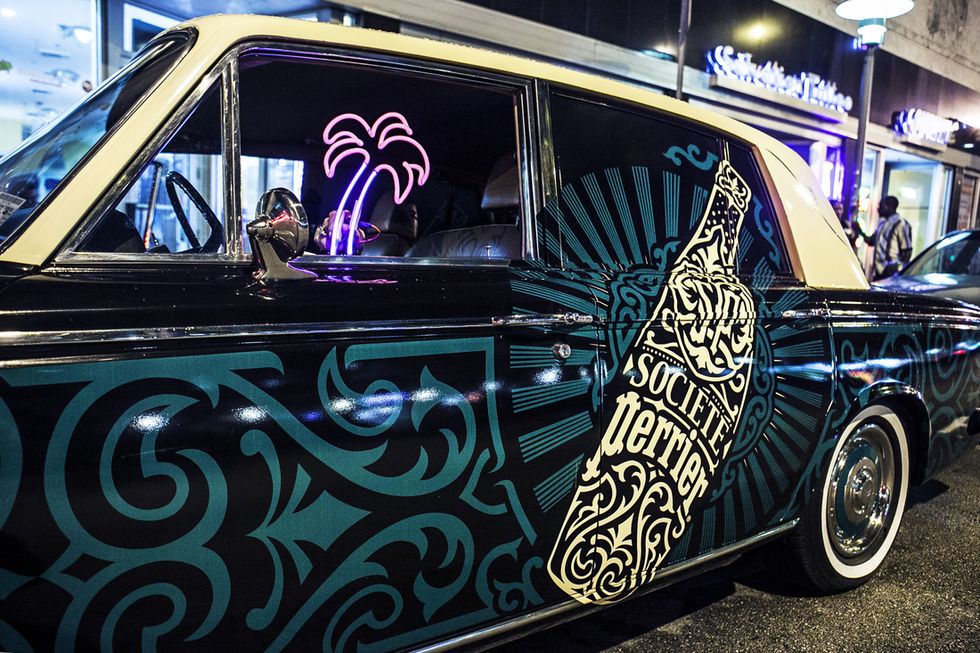 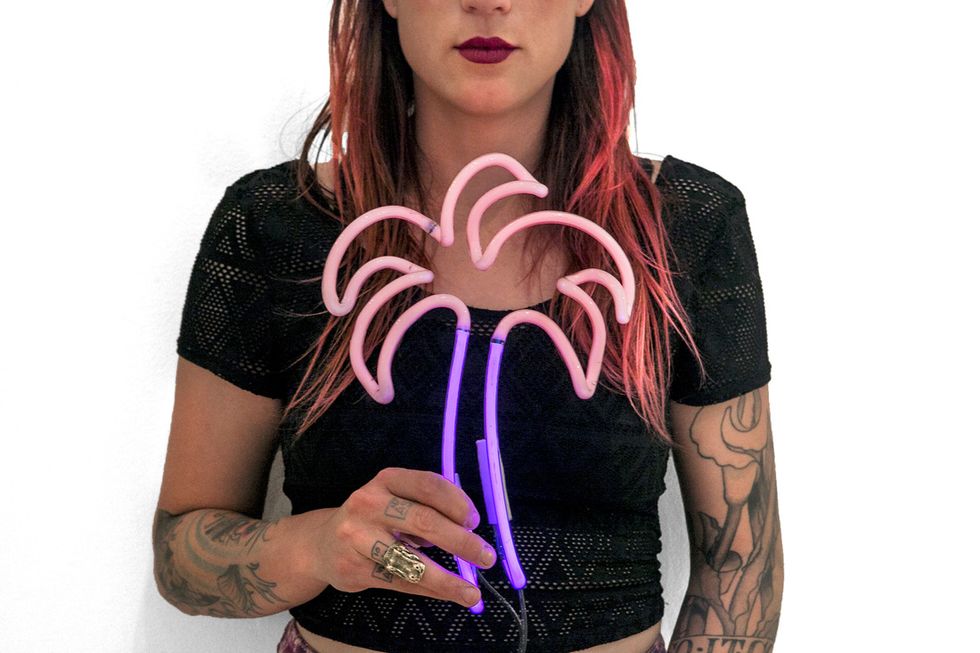 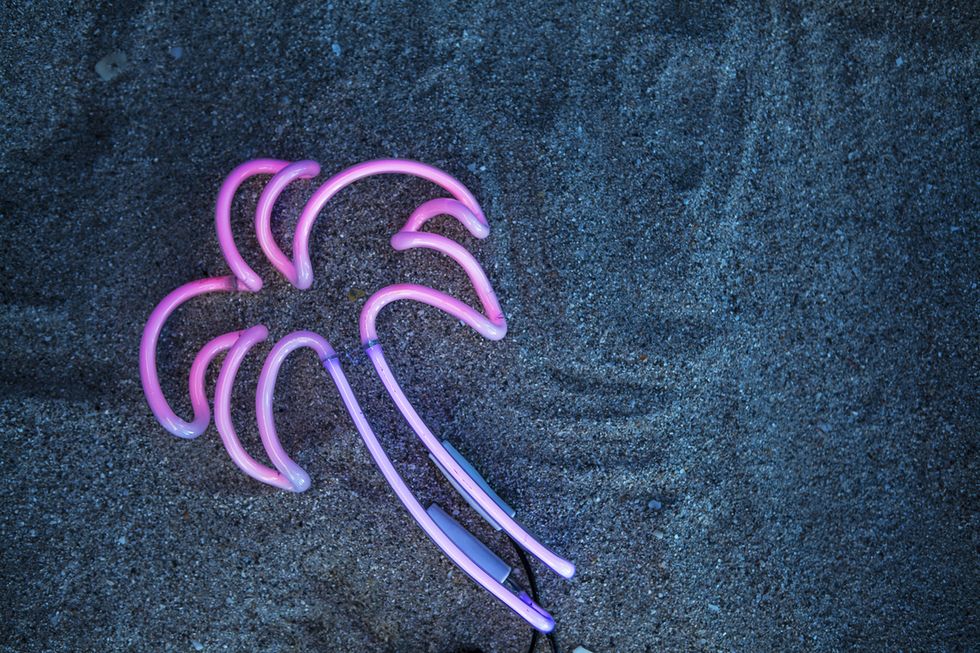 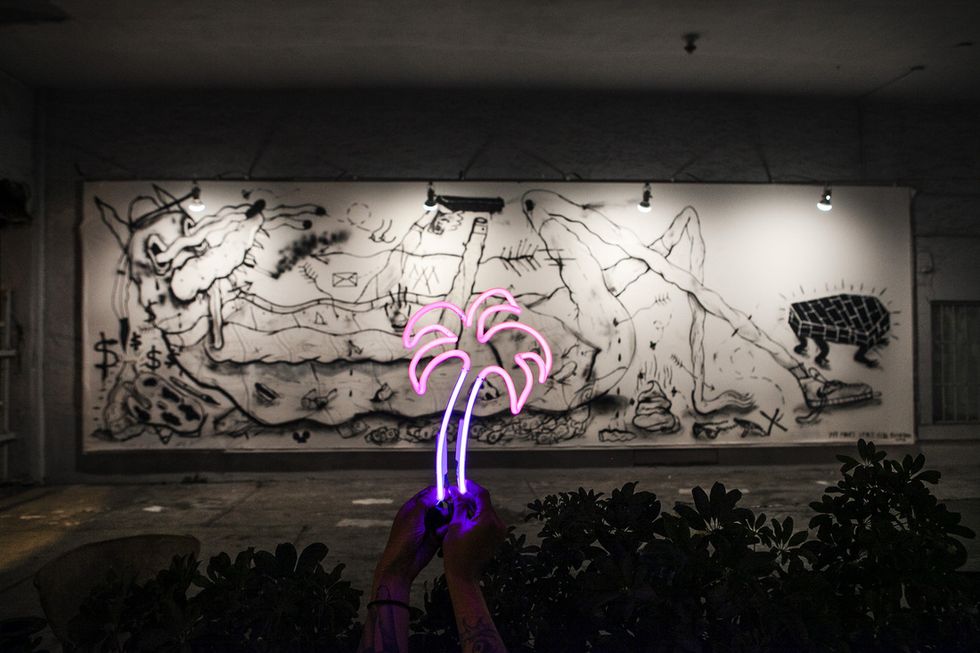 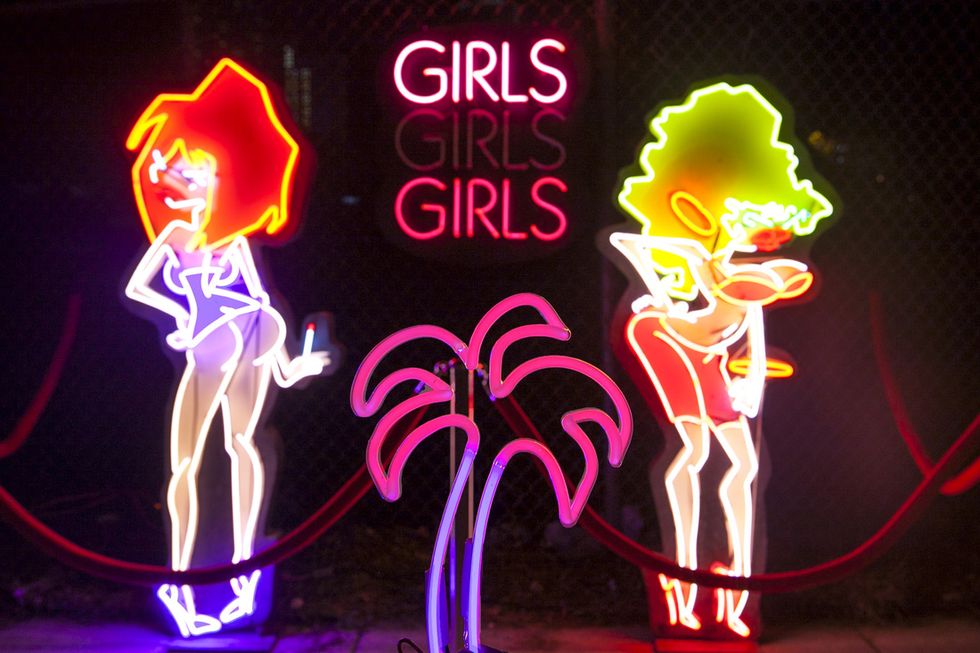 Last month, the art elite and their groupies descended on Miami for the annual Art Basel fair. Among them was SF artist Meryl Pataky who's gained recognition for her neon sculptures and work utilizing elements of the periodic table—silver, copper, iron, carbon, noble gases, and, of course, neon. For this year's Art Basel, Perrier commissioned Pataky to create a large-scale installation for their participation in the Miami Project Fair. The result? Played Out, 20 mini neon palm trees displayed on a wall. And one palm sculpture that went traveling around Miami to soak up all the fun. Since we weren't one of the lucky ones to attend this year's fair, we asked Pataky to dish about some of the highlights. Check out the image gallery and Q&A here.

Juxtapoz Magazine threw a party at The Shore Club in South Beach where the Black Lips played at the hotel's backyard outdoor pool. During the performance, a handful of people jumped in the pool without their clothes on. Eventually there were about three dozen people in the pool, dancing and splashing around. At one point, the lead singer of the band jumped in and
immediately threw up in the pool. Apparently, throwing up at the band's shows is his thing.

What Bay Area folks did you run into during the art fair?

Describe the moment Perrier approached you to commission the Art Basel installation.

Beau Basse from LeBasse Projects in L.A. brokered the project. Beau has worked with Perrier in the past  to help them find fine artists to do installations at the fairs they sponsor. Over a home cooked lasagna at Beau's family's house here in SF, we talked about Perrier for Basel. I immediately thought of tons of neon palm trees. Beau pitched my idea to Perrier, they liked it and gave it the green light.

What's the significance behind the number 20 for this installation?

Twenty was a nice round number that fit the aesthetic layout and the budget.

Other than your own, what's the best piece of art you saw at the fair?

The Rubell Family Collection in Wynwood showed "28 Chinese" and this handmade paper "boat" or tunnel by Zhu Jinshi was pretty awesome. I have worked in paper, so let's just say this piece is extraordinary. Jack Fischer and Catherine Clark always show really amazing work. I heard the Catherine Clark booth sold out. Anthony Lister was EVERYWHERE. He is an Australian artist who had murals around Wynwood and works at Scope. His work is divine. Spencer Keeton Cunningham's mural for J. Riggs Gallery Miami was incredible as well. He's a good friend and great artist who lives in San Francisco and works at White Walls Gallery.

What was the best reaction to your traveling palm tree?

The first day, my power source for it came with a broken fuse holder, so I spent most of one of my mornings going to Home Depot and Radio Shack trying to replace it and re-wire the whole thing. The second time we took it out, I was searching and searching for the Perrier Rolls Royce all over South Beach. In general, everybody thought it was pretty cool. I carried it around in a Sierra Nevada box. It was so random—a neon palm tree in a beer box that turns on when I twist it. It was like, okay, that's a thing…

One piece of advice for San Franciscans interested in attending Art Basel next year?

Book your Airbnb early! Don't expect to see everything—don't stress yourself out trying and don't get sad because you didn't. You only ever end up leaving Basel feeling like you just barely scratched the surface—there is SO MUCH happening. Get on some mailing lists for galleries that typically show at Basel ahead of time (basically by late October or November) in the hopes of receiving newsletter emails with complimentary ticket links to the fairs. When you are at Basel, sign up for mailing lists at different galleries' booths so that you'll get even more of these emails the next year. You'll have the opportunity to go to many fairs for free and have passes before you arrive.

Favorite place to stay in Miami?

Not this past Basel but the previous, I stayed in a WONDERFUL house on Normandy Isle (in between Miami and Miami Beach across a causeway). I found it off Airbnb. Gina is the host, and she calls in Casa Calais because the street's name is Calais.

Miami restaurants and bars that should be on everyone's hit list?

Mary Village in Brickell (around Downtown) is a shopping and eating extravaganza. Also, it's very close to Little Havana, which is the Cuban heart of Miami. My father still lives in South Florida (I grew up there) and spends a lot of time in Miami. He and his partner put me on to new "it" restaurants when I'm in town. I'm usually in their hands.