#TBT: Take a swig of vintage booze made in San Francisco since 1856

When San Franciscans wanted a strong drink, what were their tipples of choice?

On Thursdays past, we've peeked into fabulous watering holes of yore, as well as their signature cocktails. Now, we're dipping into the liquor cabinet to see what made-in-SF brands our forebears used to stock their bars. Asparagus gin, anyone? 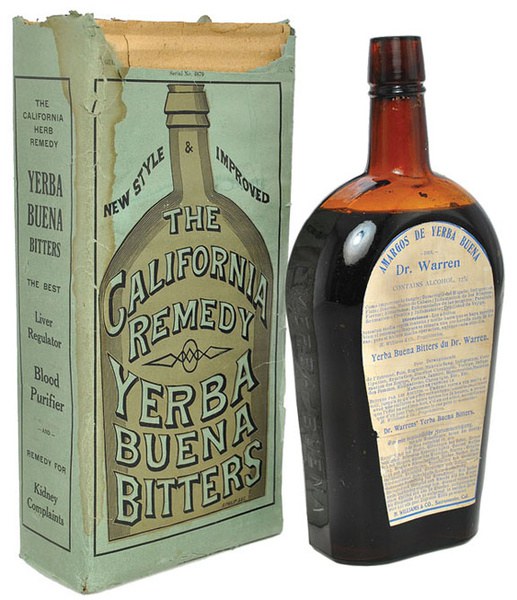 Yerba Buena Bitters (so called after the original name for San Francisco) were created by Dr. Joseph S. Warren and sold from 1870 until 1920, when they were forced to cease production due to Prohibition. They were made from a plant in the mint family, and used to treat kidney complaints, regulate the liver, and purify the blood. (via Peachridge Glass) When Jimi Hendrix was in the Panhandle to play a free concert on June 25, 1967, he drank Lucky Lager beer. Lucky Lager, once the best selling beer in California, was brewed in SF from 1933 to 1978, as well as in Vancouver, Washington; Azusa, California; and Salt Lake City, Utah. The SF plant was located at 2601 Newhall Street. (via The Gear Page) 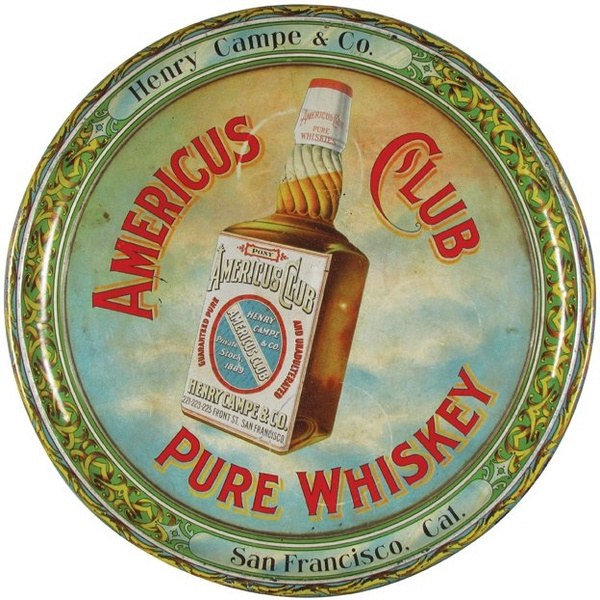 This tray, circa 1910, advertises Americus Club Pure Whiskey, which was created in the city in 1889. According to John L. Thomas, author of Whiskey Bottles of the Old West, Henry Campe opened a grocery liquor store on the corner of 2nd and Tehama in 1862. He later created Henry Campe & Company, a wholesale liquor distributing business, that produced brands such as Black Eagle, Briar Rose, Edgedale, Ferndew, Old Campe, and Americus Club, from 1887/1888 to 1917 (Prohibition). During this period, the company moved around a bit, with locations at 221-223-225 Front Street and 53-61 Drumm Street. (via The Antique Advertising Expert) 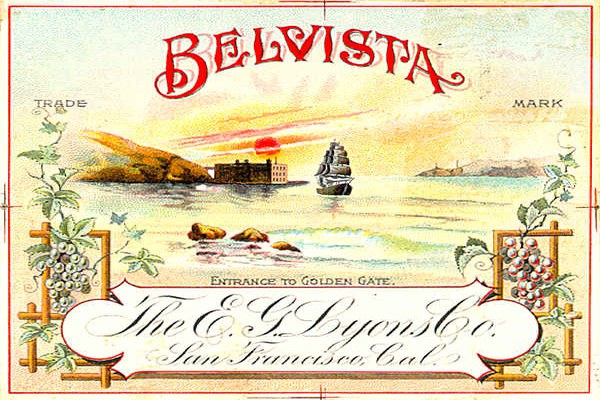 This 1893 trademark is for Belvista Wine, produced by The E.G. Lyons Company. Lyons also made liquors, syrups, bitters, and cordials, and had a location at 506-510 Jackson Street. (via Oregon Secretary of State Dennis Richardson) 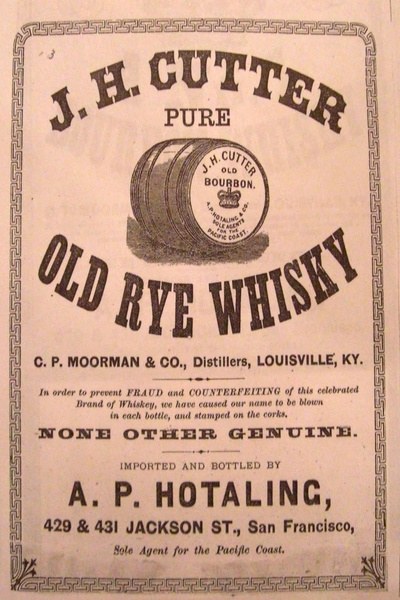 J.H. Cutter may not have been distilled in SF, but it was imported and bottled in Jackson Square's legendary Hotaling Whiskey building—having survived the 1906 earthquake and fire, the edifice is the subject of the famous quote: "If, as they say, God spanked the town for being over-frisky, why did he burn the churches down and spare Hotaling's Whisky?" J.H. Cutter, in particular, was touted in an old ad as being "medicinally pure," and, in being pure whiskey, the best stimulant and "remedy for overtaxed nerves after severe phisical [sic] exertion." (via WesternWhiskies.com) 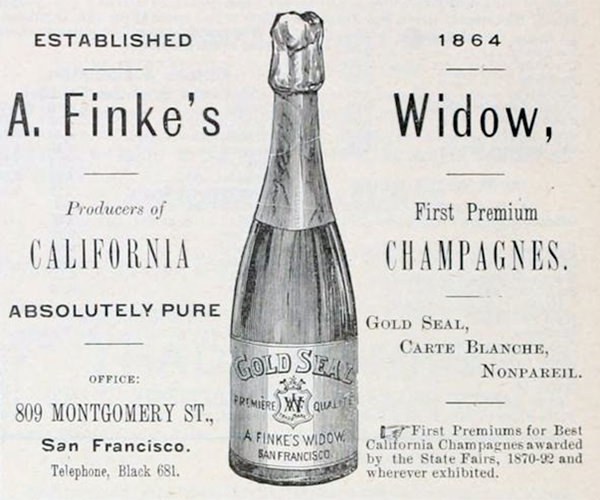 A. Finke's Widow California champagne appears to have been made in San Francisco, which is unheard of nowadays. Located at 809 Montgomery Street, and then at 704 Sansome Street, the brand also offered sweet, red and white wines as of 1934. via VINEPAIR) 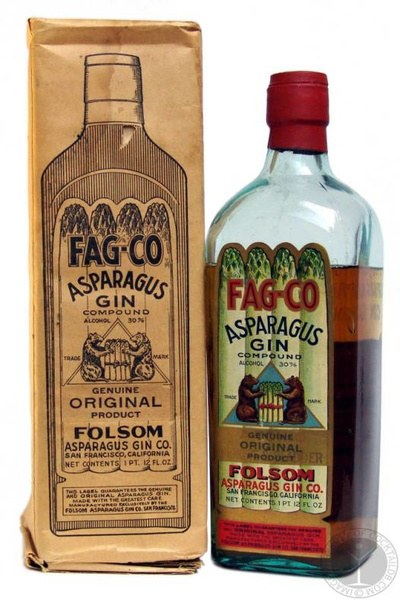 Imagine a gin made from asparagus. It happened. From 1916-1918, at 350 Clay Street, Folsom Asparagus Gin Co. (unfortunately known as Fag-Co.) concocted an elixir that was at the time described as being "composed of the juice of fresh selected asparagus and double stamp gin...very agreeable and pleasant to the taste." (via EZDrinking) 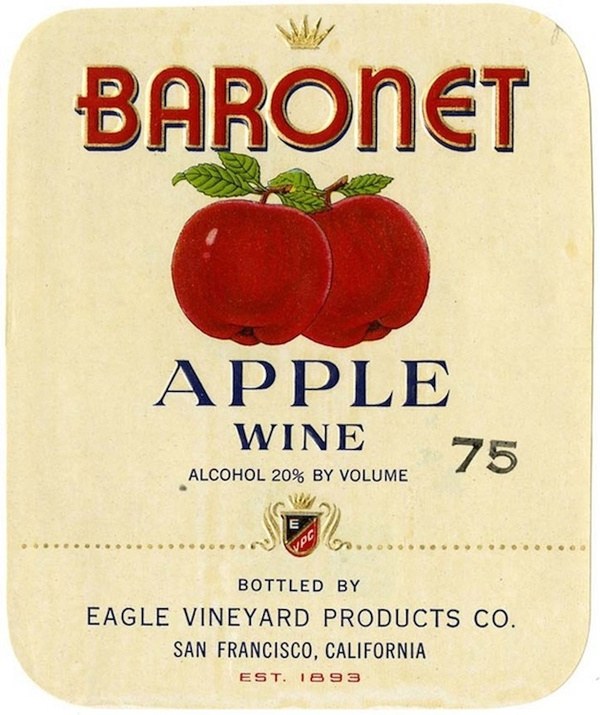 This 1930s label for Baronet Apple Wine proves that cider has long had a place at San Francisco tables. This particular brand was established in 1893 and bottled by the Eagle Vineyard Products Company. (via Collectors Weekly)

Louis Taussig operated his import and wholesale liquor distillery business from 1856 to 1918 from 26-28 Main Street. Among the the merchant's brands were Gold Spray, Rose Bouquet, The Major Bourbon, Carroll Rye Whiskey, White Elm, and Blackberry Cordial. Cordials were medicinal, used to treat such ailments as "hot weather disorders of the stomach." (via Western Whiskey Gazette)