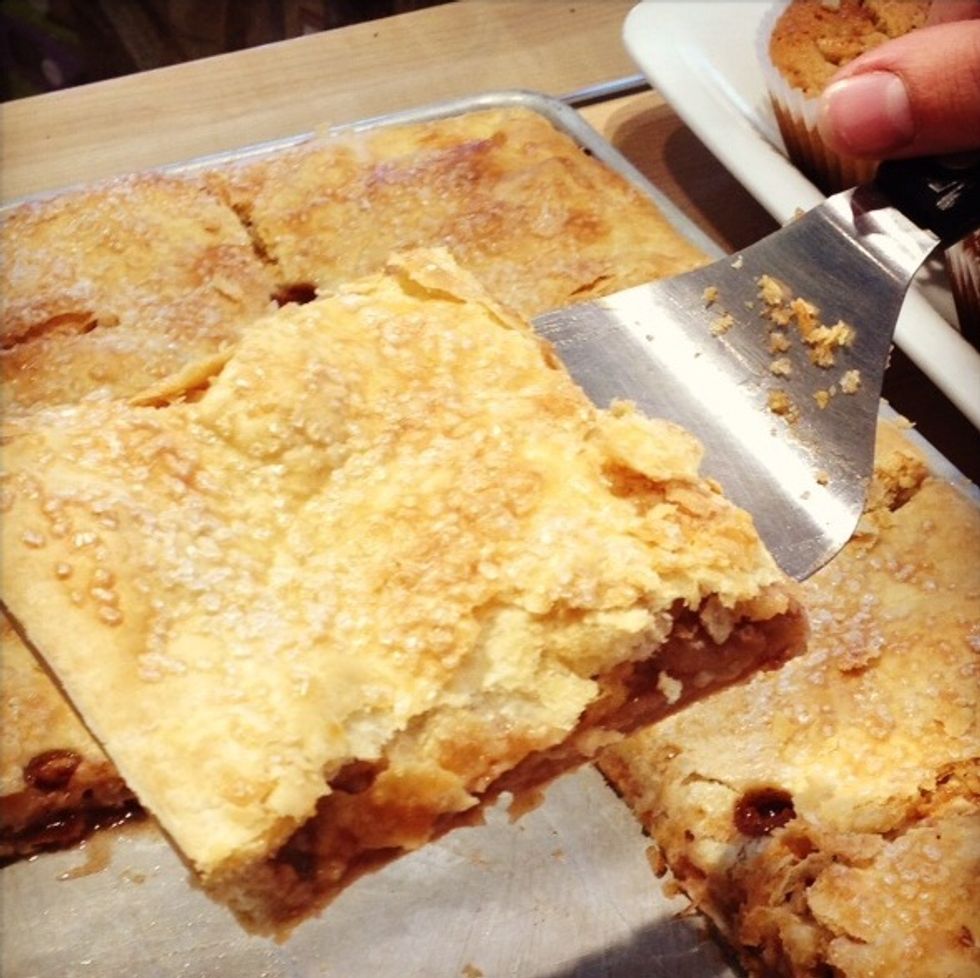 7x7 asks the city's chefs for the recipes to their most loved cocktails, bar snacks, starters, mains, and desserts. If there's a dish you can't stop thinking about and want to make it at home, email schuyler@7x7.com. Your wish may end up on the blog, along with the actual recipe from the chef.

Oakville Grocery’s chef Jason Rose concocted this crowd-pleasing pie, but baker Julie Marie Craig makes it every morning starting at 4am—a worthy cause. It serves an army (almost), so bring it along with your appetite to a holiday feast.

Juice of one lemon

1. Place the flour and  salt in the bowl of a food processor. Pulse a few times to combine.

2. Add in butter then pulse for  20 seconds, or until coarse crumbs have formed. Transfer to chilled mixing bowl.

3. Make a well in the center and pour in two-thirds of the water.

4. Gently twist in with your hand; shaggy dough should start to appear.

5. Add the final bit of water and continue to work in until a ball has formed.

6. Knead on a lightly floured surface until it has come together—this should take 3-5 minutes.

8. Form into flat rectangles and wrap in plastic wrap. Chill for 2 hours.

2. Place the apple chunks, sugar, cornstarch, cinnamon and juice in a bowl.

3. Toss until the cornstarch has fully dissolved into the liquid.

4. Place in fridge while rolling out the dough.

1. On a lightly floured surface, roll out one of the portions of dough, to 19 x 14 inches.

2. Place in an ungreased half sheet pan, letting the excess dough hang evenly over the edges.

3. Evenly spread all of the filling into the crust.

5. You can either vent the pie by now cutting out shapes in the top crust with very small cookie cutters or cut slits in the top after placing it in the pan.

6. Place dough atop the filling, making sure that there is a slight overhang from the pan.

7. Using a rolling pin, roll along the edges of the pan, sealing the bottom and top crusts together. This action will also cut off the excess over hanging dough, which should fall right off. If it doesn’t, neatly pull off the excess dough at the seal.

8. Pie can now be chilled for a maximum of 24 hours and baked later, or baked straight away.

9. Before baking, whisk the yolk & heavy cream together. Using a pastry brush, brush atop the top crust. Sprinkle with raw sugar.

10. Bake in a non-convection oven for 30 minutes, rotate the pan, then bake an additional 30 minutes, or until the crust had become deeply golden in color.