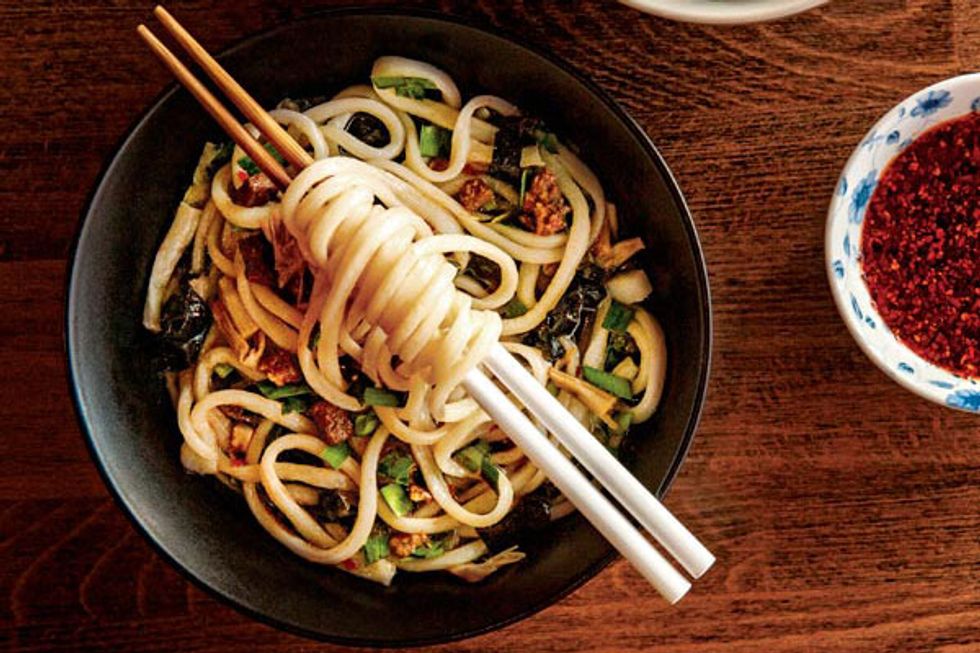 Shaanxi: The Cradle of Chinese Civilization and Our New Favorite Takeout

Order the Qishan minced pork noodles from Terra Cotta Warrior (415-681-3288) in the Outer Sunset, and you’ll be presented with a piping hot bowl filled to the brim with a soul-warming, spicy-sour broth. Just below the surface you’ll find a single, seemingly neverending noodle. As manager David Deng hoists a ladle full of soup high above the table and takes a pair of shears to the dangling tendrils, I ask just how lengthy the hand-pulled miracle is. “I don’t know!” he says with a laugh. This is just one standout dish on a menu dedicated entirely to the regional cuisine from Xi’an, the capital of China’s Shaanxi province—also home to China’s first emperor’s famous tomb and its clay soldier inhabitants, after which the restaurant was named.

“Four years ago, I had doubts this kind of cooking would do well here,” says Deng. This year, two other restaurants have opened with menu nods to this regional cuisine, which mixes spicy chili elements and sour notes from the liberal use of rice vinegar: House of XiAn Dumpling and Xi An Gourmet (415-668-5888). But none have been as all-encompassing as Terra Cotta Warrior, which boldly offers only regional delights. “Shaanxi food is not the Chinese cooking Americans are used to,” says Deng. An abundance of pita bread and lamb and a notable absence of rice will tip you off that Shaanxi fare strays from the status quo. But the style will likely do well here—according to Deng, the culinary climate in Xi’an is very similar to that of San Francisco’s own eclectic gastronomy. Terra Cotta Warrior’s Chinese burger (flavorful pulled pork nestled between two pitas seared to crisp perfection), lamb soup (with pita and silky vermicelli noodles), and a side of ginger-studded spinach make an ideal antidote to a wet, foggy, midsummer’s night in the city. Soon Shaanxi won’t be known just for its warriors.