Showmanship and Sex Appeal Are the Key Ingredients at Coqueta 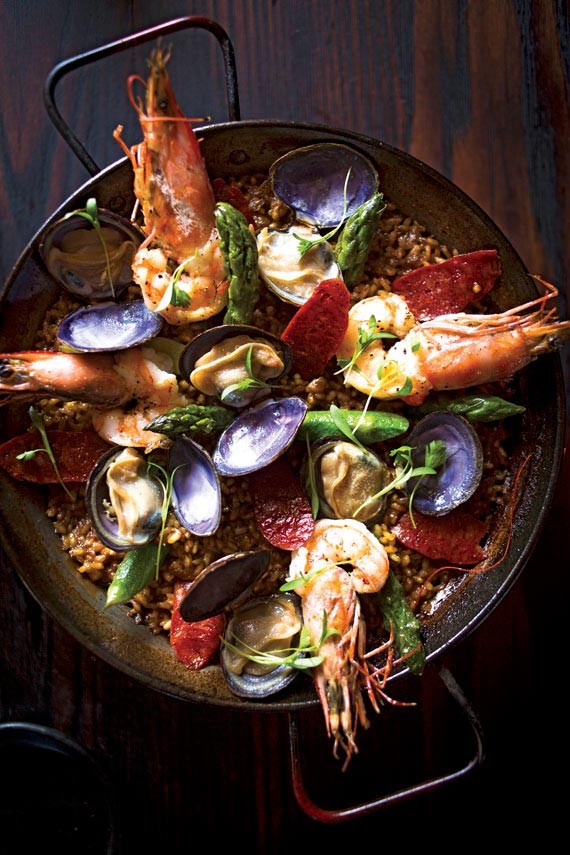 Previous Next
The family-style Fideua may look like paella, but it's actually vermicelli pasta 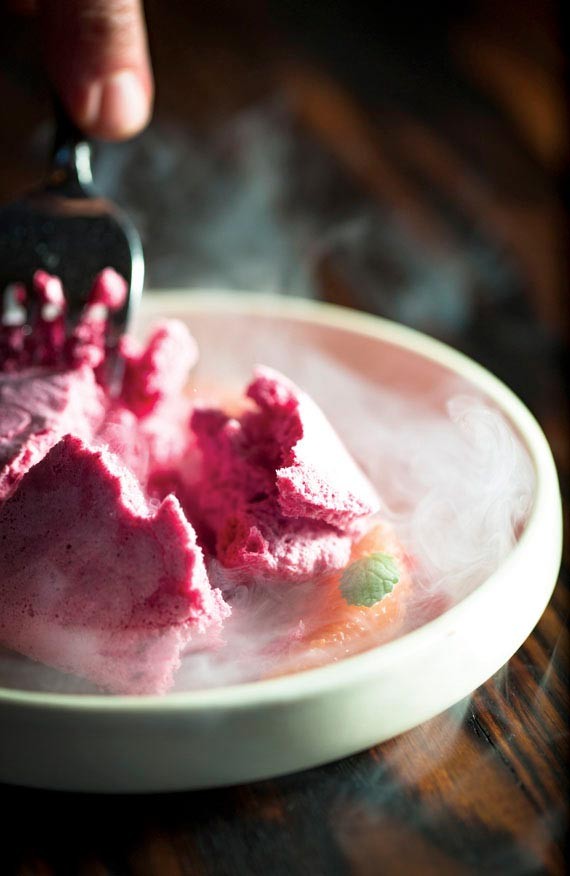 Previous Next
The blood peach neblina, frozen at the table, gets a dousing of liquid nitrogen before a swift crack of a spoon to split it. 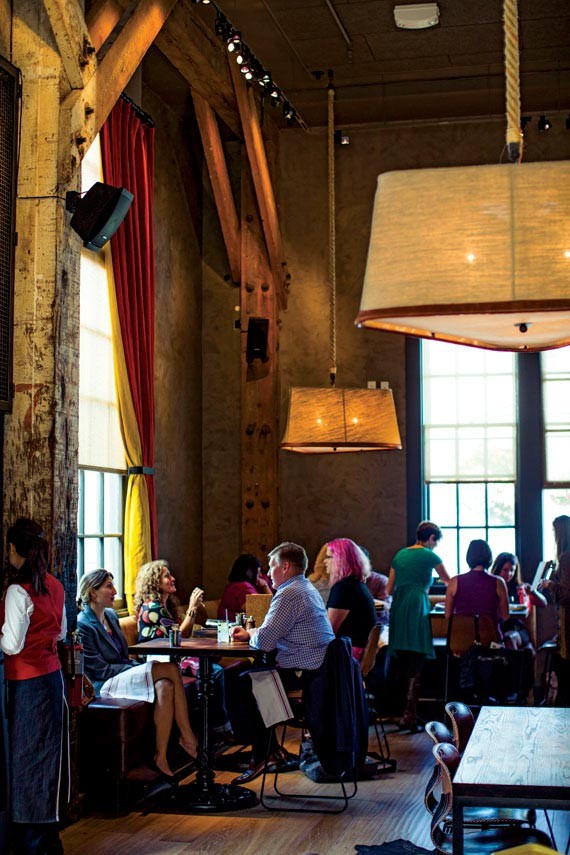 Previous Next
Long enchanted by the former Lafitte space, Chiarello turned the Pier 5 locale into an ode to Spanish rusticity. 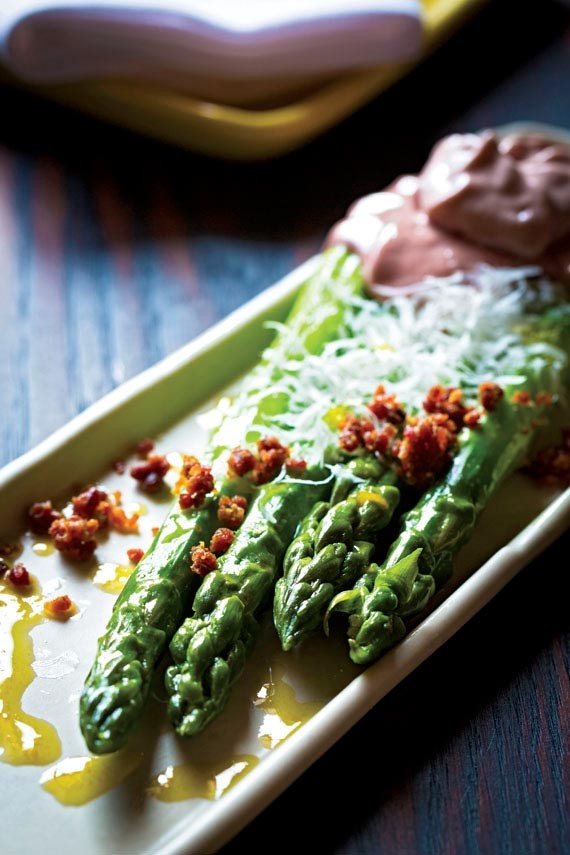 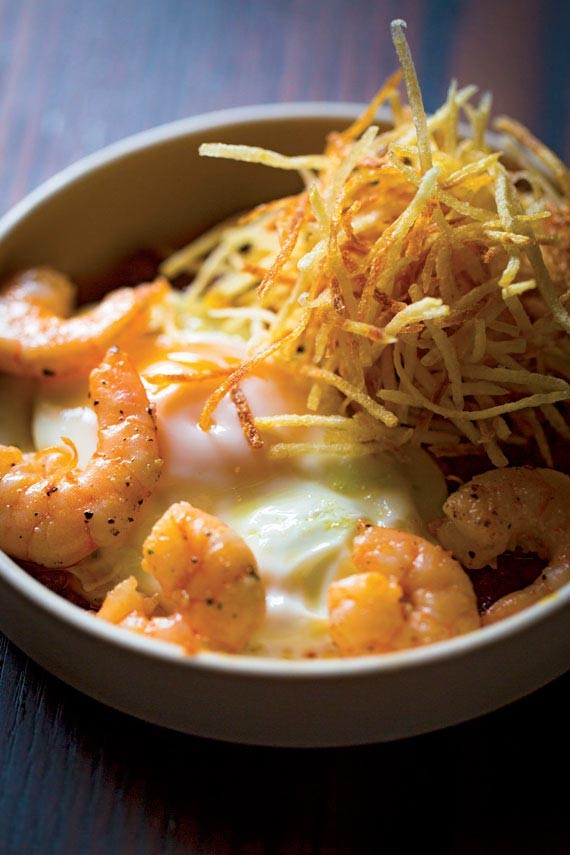 Previous Next
Inspired by Chiarello's trip to La Boqueria market in Barcelona, a sunny-side up egg is mixed with shrimp and chorizo 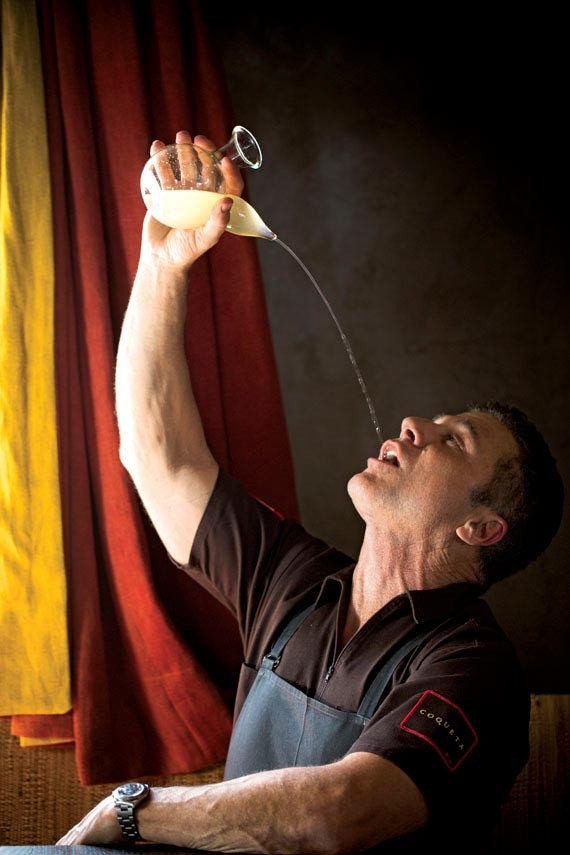 Previous Next
Michael Chiarello taking down a porron. 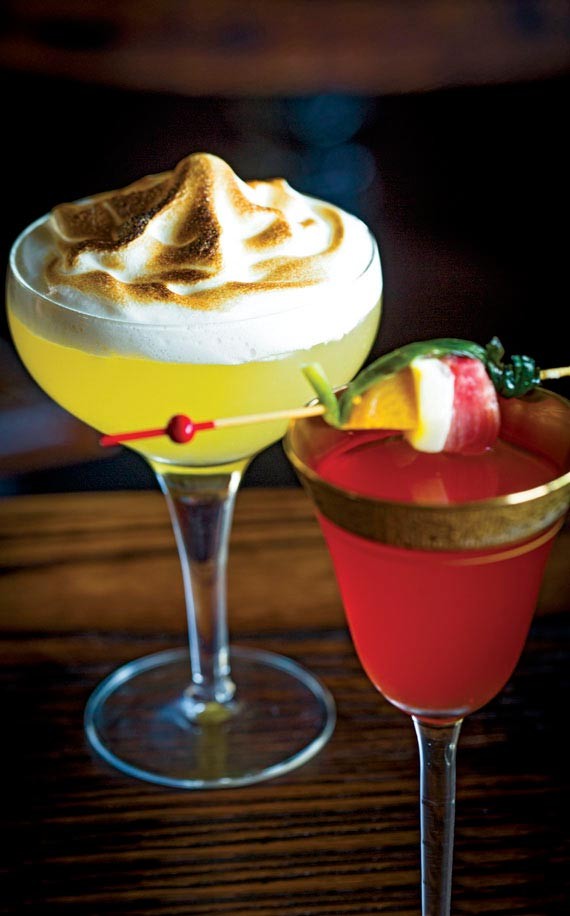 "Swallow as you go,” says Michael Chiarello with a wink. He tosses back his head to let a slick stream of red wine tumble into his mouth from arm’s length with the bravado of a man who knows he has an audience—and never tires of applause. He passes the porron (a traditional Spanish party pitcher) to guests at the bar, all thrilled and terrified as they wait their turn to demonstrate what they’ve just learned from the master. Either way, they’ve been wooed.

Chiarello is a known charmer. The celebrity chef has garnered legions of fans with a James Beard-nominated cookbook (Bottega), Emmy-winning Food Network show (Easy Entertaining with Michael Chiarello), and a finalist run on Top Chef Masters. As of April, he’s playing host with the most at his already-bustling Coqueta, a tapas-style restaurant on Pier 5 named after the Spanish word for “flirt.”

The moniker is no wonder: Like the man himself, Coqueta’s food and atmosphere are playful. The chef visited us tableside to tell the story behind our first course, his wonderfully crusty yet moist pan de cristal (an impossible-to-replicate Spanish bread used in pan con tomate), which involved smuggling in samples from Spain. Chiarello is also a showman, and each plate is a performance. Stars include the pluma (pork shoulder) of jamón ibérico de bellota, a prized cut of buttery nuttiness that evokes the life of a pig that grazed on acorns to perfectly marble its meat. Served with a honey-chili glaze alongside toasted chili threads and peppery nasturtium leaves, the jamón has just the heat you’d expect from such a spicy personality.

Craft cocktails are also part of the show. Bar manager Joe Cleveland turns heads with such concoctions as the Pyrénées Snowball (cider-gin meringue topped with pop rocks) and The Sun Never Sets (with a bruléed mezcal-pineapple espuma). Dessert, too, is expectedly dramatic: The blood peach neblina is a brilliant fuchsia mass of tart fruit, frozen with liquid nitrogen right before your eyes. Exhale on the first bite—Chiarello calls this smoky sideshow “the dragon.”