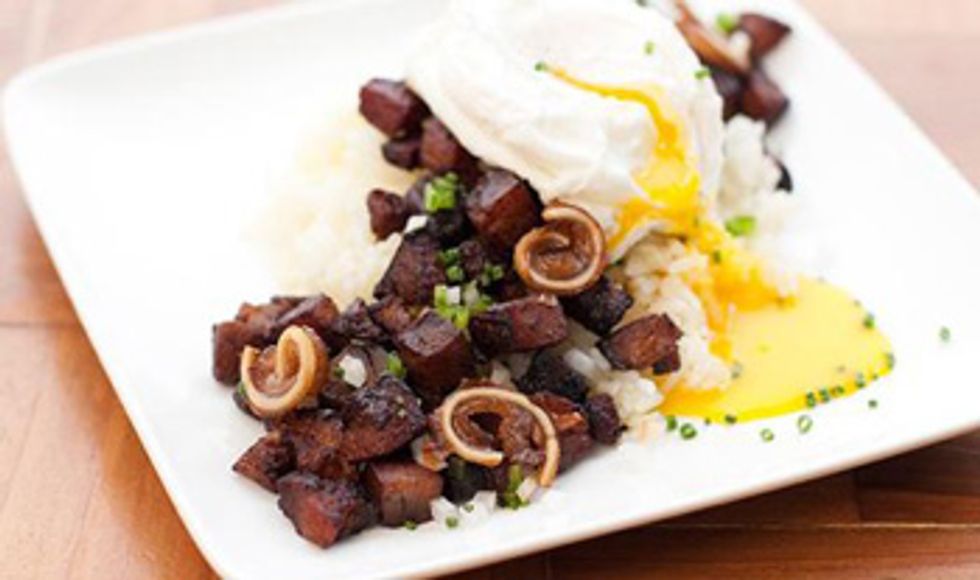 Silog Meet Your Tortilla: The Collision of Filipino and Mexican (and Food Trucks)

It's an all too familiar sounding story. Poleng Lounge chef Tim Luym left the world of San Francisco restaurants last year when his restaurant shuttered due to the down economy. A few months later, Luym opened a personal project, Attic, serving Asian street food in San Mateo. Naturally, his next venture was a food truck off-shoot called WOW, serving Filipino street food. A little over a year after Poleng closed, Luym resurfaced at San Francisco's coolest street-food party Off the Grid Fort Mason with the WOW silog truck, melding Filipino and Mexican flavors.

It sounds super niche, right? Well, actually, Luym is third in the Filipino-Mexican fusion game. William Pilz of Hapa SF (not to be confused with Hapa Ramen) has been serving up food that's Filipino wrapped up in Mexican since it launched last spring. Señor Sisig does it too. And now, apparently, our food truck-loving masses are hungry enough for Filipino-Latino food to sustain three different trucks devoted to the idea.

Following, we compare the three trailblazers through the lens of silog, a Filipino breakfast fallback that Luym says doubles as a great late night snack or hangover fare, for that matter.

How do you serve it?
Luym:
WOW offers spicy garlic fried rice, a fried egg with a soft yolk and several different protein options. We'll cook the egg differently if people ask for it. Our spicy corned beef version is the most popular, but sweet longanica sausage, cured sweet chicken, and Spam do well. Pescatarians like the option with milkfish, which we import from the Philippines.
Pilz:We use a poached Eat Well Farms egg and sisig made with marinated pork jowls and shoulder. Our garlic rice gets flavor from garlic chips as opposed to the traditional fried garlic method. We'll give people plain white rice or brown rice on request.
Kidera:We have three protein options: pork sisig, chicken sisig, and tofu sisig. Meats are marinated for 48 hours before they're grilled, then chopped into fine pieces and marinated a second time. We also serves tocino (sweet pork) and longanisa (sweet sausage) as specials. The egg is cooked to personal preference, but if you don't specify it's done over easy because that's how traditional silogs are served.

How do you describe it to customers?
Luym: "Like a Denny's grand slam breakfast."
Pilz: "We serve Filipino foods without factory-farmed meats. It's SF-influenced, California fare.
Kidera: Customers can "silog" anything on the menu by adding an egg. "People have silog'ed our tacos, burritos, nachos, rice plates, fries. You name it. If it has been on our menu it has been silog-ed."

Why the fusion with traditional Mexican street food? Do they do that in the Phillipines?
Luym: Filipinos like rice—not beans and tortillas. This is a totally American adaptation for food trucks. In the Philippines, one of the only wrapped, portable foods is the lumpia. But most Americans expect Mexican food when they see a food truck, so we bridge the gap by offering silog components in a taco. Out in San Mateo there was a period where people were asking me for tacos at the WOW truck and I had to turn them away. Now I put my offerings into a taco and I don't have to. Kogi paved the way for us with the Korean taco.
Pilz: Mexican food is one of my favorites. People kept pressing me for tacos, so we gave it to them. I don't offer burritos because they're not as close to my heart.
Kidera: I wanted to open a food truck that served some sort of Asian- Mexican cuisine. My long time friend and business partner Gil Payumo thought that Filipino sisig would go great in a taco. Gil's family is from the Pampanga provence of the Philippines where sisig originated, so we tested his family's recipe out in a taco and it was delicious. From that point, we decided to build our business concept around sisig, which is how Señor Sisig was born. About 3 months ago we introduced the the tosilog burrito, made with garlic fried rice, tocino, tomatoes and a fried egg wrapped in a flour tortilla and served with vinegar. It's awesome!

What sells best?
Luym: We sold out of tacos at Off the Grid on Friday.
Pilz: Sisig in tacos or with rice makes up 60 percent of my sales. Our newer adobo bahn mi is getting more traction.
Kidera: Our tosilog burrito has become extremely popular. We don't serve it everyday but when we do put it on the menu we always sell out.

What's next?
Luym: We're trying to get permits so we can have more trucks in San Francisco. The city recently made it easier and cheaper so hopefully we'll have some luck.
Pilz: Eventually, we'll offer more silog.

How do we keep track of you in the future?