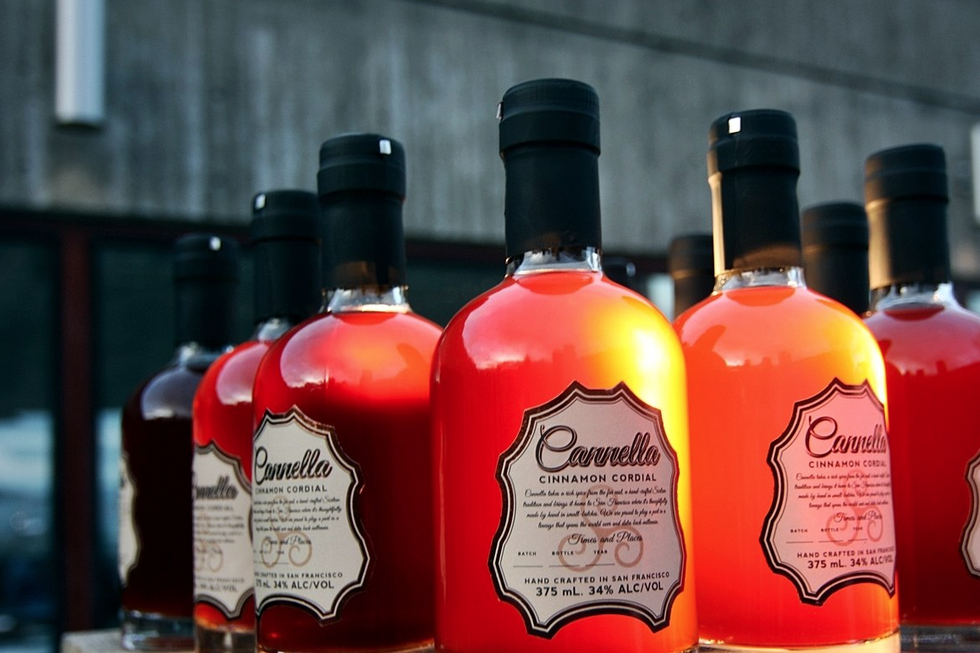 “I'm Mr. Cinnamon," grins Joe Cannella, at the Craft Spirits Carnival at Ft. Mason where he was offering samples of his Cannella Cinnamon Cordial. His first batch, made at the Seven Stills Distillery in Dogpatch, sold out shortly after its release late last year. His fourth batch has just been bottled.

Cannella always knew his family name was Italian for cinnamon. But it was during a trip to Sicily with his uncle that a revelation struck: Having encountered a cinnamon liqueur behind a bar, they set about tasting several brands. Finally, he decided “I can do better than this." So, he quit his job at Google to pursue the project full time.

Cannella began with brandy as a neutral base, and then set about finding just the right varietals of cinnamon. He studied the leading scientific botanical textbook on cinnamon, a 207-page tome that he now likes to bring to events, partly to poke fun at himself. “I'm a cinnamon nerd," he laughs.

He settled on three types of cassia—what most Americans know as cinnamon—sourced from Vietnam, China, and Indonesia; and one Sri Lankan Ceylon cinnamon, whose essence is softer and contains some citrusy notes. Unlike some other makers, Cannella uses no extracts in his recipe.

“We are macerating directly from the cinnamon bark, the most natural possible way to represent that cinnamon flavor," he says. The maceration process takes about a month, and the inclusion of the Ceylon cinnamon also helps to distinguish this cordial from the rest.

And this isn't candy syrup we're talking about. “We're proud that it's not overly sugary-sweet," Cannella says, noting that his spirit contains just six percent sugars while other cinnamon liqueurs can have up to 20 percent sugar by volume. “The challenge was getting the finish right. This took a lot of testing and, in the end, it was just the right touch to allow it to mellow out some of the spicy flavors."

Cannella's extensive studies on cinnamon will aid in his plan to start sourcing varieties of cassia not currently available in the U.S.—he has already begun reaching out to contacts in Bangalore. “We want to represent the different types of cinnamon around the world and educate the market," he says. A drier Cannella Cinnamon Amaro is also in the works.

On its own, Cannella makes a perfect after-dinner digestif. In a cocktail, it blends well with the smoky flavors of Scotch or mescal. The concoction is available at San Francisco spots including Dosa, La Urbana, Presidio Social Club and Reed & Greenough. The Alembic plans to unveil a Cannella-based cocktail on its menu this fall. // Cannella Cinnamon Cordial (Dogpatch), cannellaspirits.com