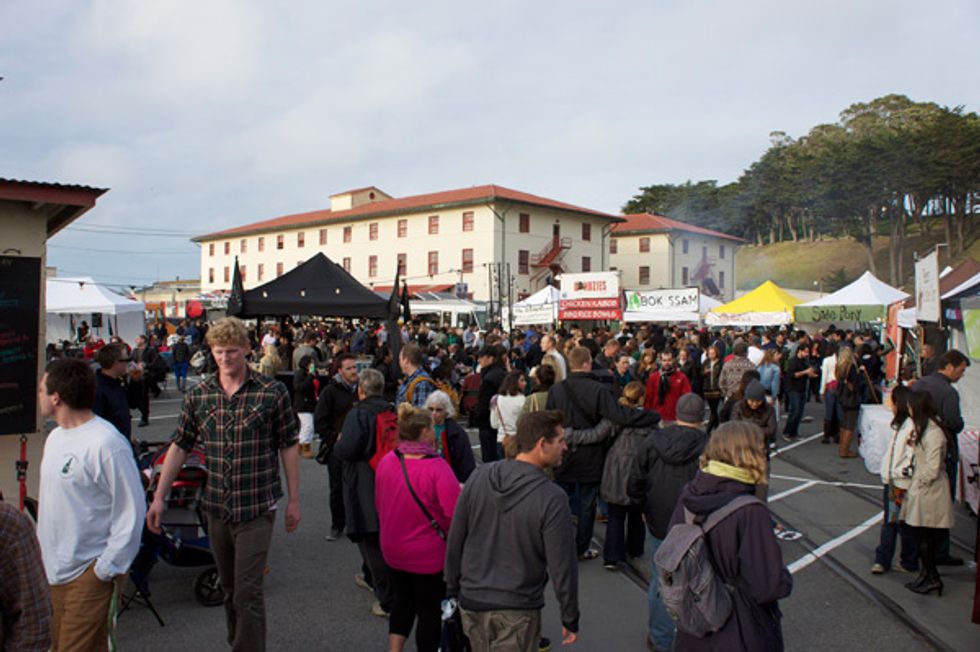 Sit-Down Prix Fixe Dining Comes to Off the Grid

One of the downsides of Off the Grid Fort Mason Center has always been the lines, and the crowds jockeying for picnic tables in that often windswept parking lot. Well, little do many people know that with this season's relaunch at Fort Mason a couple weeks back, the team has added a more civilized, sit-down option just a few steps away from a whole new bar and lounge. Added bonus: There are heat lamps there.

Three vendors are currently offering table service in the back halves of their tents, adjoining the new lounge area: Azalina's, Hapa SF, and Stag Dining Group. All three still offer a couple of street-food items to the crowds out front, but sneak your way under the Lounge sign, and especially in the earlier evening hours you will find a quieter place to rest. The deal is $40 to $50 for four to five courses, without beverages, and you choose to eat Malaysian food from Azalina's, Filipino-American food from Hapa, or the refined and inventive California fare from Stag chef Jordan Grosser. As Grosser told us, "It's basically the same thing we do at our underground dinners and events that we charge $100 for, so it's kind of a steal."

Recent dishes (they will change weekly) have included a fried pink peppercorn chickpea quail from Azalina's; a Marin Sun Farms beef head broth with beef cheek dumplings from Azalina's; a Lechon Kawali with chicory "sinangag" and Romanesque bagna cauda from Hapa SF; and a pressed chicken with shellfish-chorizo escabeche and couscous from Stag Dining Group.

Stag Dining has also launched a cocktail catering business called Derby with the help of barman Reza Esmaili (formerly of Conduit and Long Bar), offering a cocktail program from a bar tent separate from the established Alembic tent outside in the main courtyard.

Recent cocktails have included a bourbon "milk julep," that was a minted version of a bourbon milk punch; a blackberry gin bramble in snowcone form; and a twist on the Old Pal dubbed the New Old Pal with bourbon, bitter orange liqueur, and dill-infused dry vermouth.

And just behind the cocktail tent is the Brewtruc mobile taproom in a converted schoolbus, also new to Off the Grid this season, which last Friday was serving a full line of Linden Street brews for $5 each, tastes encouraged.

So far, seats have been readily available at each of the three tents, with about twelve seats in each, but reservations are recommended as word spreads. Sample menus are linked there when you click through for reservations.

And sure, if it's freezing, you may end up dining in your parka, but suffice it to say it beats the bustle of the main event, should you not be in the mood for that.

Jay Barmann is the editor of Grub Street San Francisco.

off the grid
Related Articles