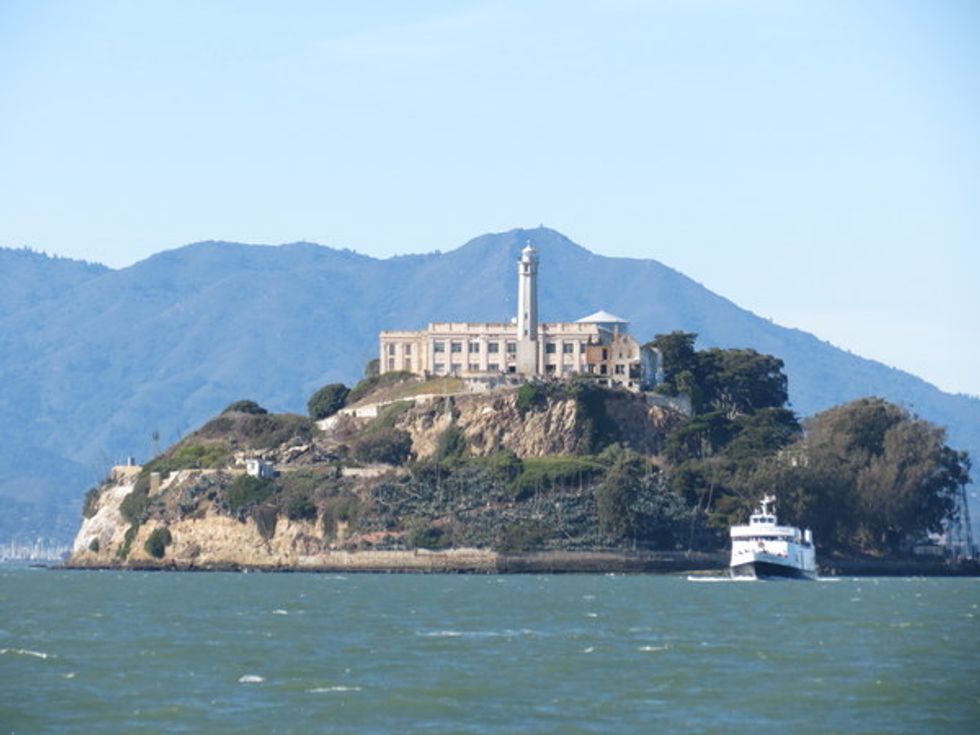 Spend the Night on Alcatraz

It’s no secret that in San Francisco, we have some of the greatest parks at our disposal. Hiking, biking, running, swimming – you name it – we’ve got a place to do it. With so many choices, not knowing about, or even forgetting a good one is bound to happen every now and then. Perfect example? Alcatraz Island. Yes, that rock out in the middle of the bay isn’t just a tourist attraction, it’s a federal park. Don’t let out-of-towners have all the fun.

We’ve all taken the boat ride over at one point, showing around guests, and gleaning an unknown fact or two from the audio tour. But spend a little more time on Alcatraz and you’ll discover this Rock has many secrets to tell, especially when the sun goes down.

“Congratulations. You’ve won the lottery,” says Park Ranger John Cantwell as he gets a group of 30 high school freshman from Santa Rosa ready to spend the night on Alcatraz. (I was lucky enough to score a spot as a parent chaperone.)

Armed with PJs and sleeping bags, it’s a sleepover unlike any other these kids have ever experienced. But getting an invitation to this party takes homework and a lot of luck.

These unique sleepovers are a fairly regular occurrence on Alcatraz. There are 18 overnights every year with 200 to 400 groups vying to win a spot. Since demand is high, only 501 © (3) non-profit groups are eligible to apply. Applications are accepted only during the month of November for dates the following year.

The overnight program got its start when a group of Boy Scouts who spent the day on The Rock doing community service were invited to spend the night on Alcatraz as a reward. The idea stuck. Groups who come prepared to spend the night, also come prepared to get their hands dirty while doing a community service project of their own. Once the work is done, the fun and education begins.

With a Park Ranger in the lead overnight, visitors explore Alcatraz and see things most folks (even locals) don’t know exist. You don’t have to be a history buff to be fascinated by the island’s varied past (remember, I was with teenagers) and understand why it’s important it be cared for in the future.

Though best known as a federal penitentiary, Alcatraz Island first served as a military fortress during the Civil War. At its peak, there were over 110 cannons mounted on the island. You might walk through one of the numerous tunnels (originally built to allow soldiers to travel quickly on the island) or see a very rusty washing machine Al Capone may have used to do the laundry during his time on The Rock.

For some, there’s a certain creepiness that comes along with the idea of spending the night curled up in a cell on Alcatraz and touring the hospital operating room armed with flashlights can certainly warrant a good case of the chills. But I was remarkably surprised by how creepy my experience wasn’t. On a clear night, one glimpse of the San Francisco skyline is all it takes to see the brighter side of this island in the bay. And if the nighttime sky doesn’t win you over, sunrise surely will.