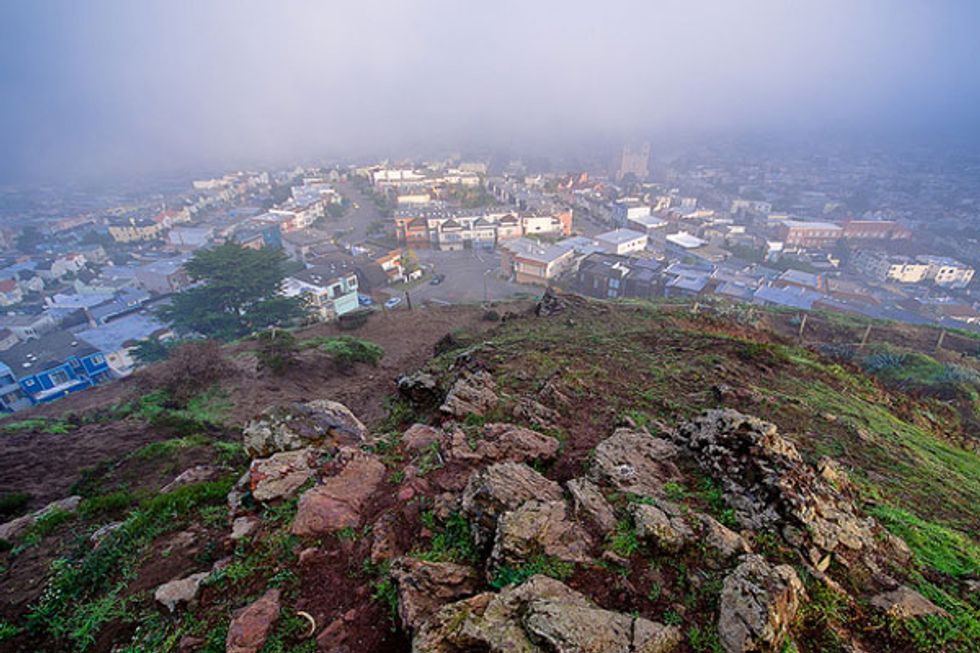 Step Up in Golden Gate Heights for the Ultimate Weekend Hike

Exploring neighborhoods is an intrinsic part of getting to know any city, whether visiting as a traveler or rambling through a local hood. No doubt one of the more interesting aspects of San Francisco is its geography—it's surrounded by water on three sides and said, like Rome, to be built on seven hills.

But anyone who’s walked around this city knows that there are considerably more than seven (there are actually 49 hills), and this weekend's hike in Golden Gate Heights will take you up, over, across, and roundabout two of them bad boys. Golden Gate Heights lies south of the Inner Sunset and northwest of Forest Hill. Its boundary streets are Kirkham Street to the north, Rivera Street to the south, 8th Avenue to the east, and 17th Avenue to the west.

What You're In For

In defiance of the grid street system laid over the rest of the Sunset more than a century ago, the streets in this part of town are curved and steep, an accommodation made for the steep, chert outcroppings that underlie the heights. So steep in fact that many of the streets you'll traverse transform into stairways, 12 in all for this hike, and you'll reach 990 feet of elevation change in the 3.1 mile meandering loop.

Each of the hillside paths have something to offer, and a few of them are special enough that you’ll want to climb them. While it’s not necessary to use our particular starting point, the route direction has been crafted to optimize the unique appeal of each set of steps.

1. The hike begins at 15th Avenue where Quintara turns from street to path, unusual in that it begins as two parallel steps that then merge as they approach 14th Aveune. At the crest, turn around to view distant Ocean Beach's breaking surf.

2. Next head left on the uphill side of 14th, veering around to the right at Radio Terrace to reach Golden Gate Heights Park, well worth a few minute's ramble.

3. At the northeast corner of the park (at 12th Avenue.) turn right at the blue police call box and head down Cragmont until you come upon lovely Oriole Way. As you descend note the charming homes that face the path, which leads us down to Pacheco.

4. Here go left, then immediately right on 11th for one block, making another left onto the uphill side of Ortega.

5. This soon leads to an ascent up Aerial Way, then across Pacheco (Aerial is now a street) and a right turn onto Funston. As Funston turns east it meets Pacheco, then turn and descend via Cascade Way.

6. A right turn at the base leads to Selma Way, but overshoot it and then loop back since Ortega is a bi-level street.

7. After Selma, head left on Noriega for a two blocks until it intersects with14th Avenue.

8. Stay north on the uphill side to Lincoln Walk to make the steep ascent to the top of Turtle Hill, the high point of the jaunt at 666 feet. Here Grandview park provides one of the last remaining habitats within the city for a number of native plants that include the endangered Franciscan wallflower and dune tansy. You'll also see coyote bush, beach strawberry, bush monkey flower, and bush lupin. Depending on the weather from this vantage point there can be outstanding views, hellacious winds, or zero visibility on a foggy day.

9. Circle around the hill and descend on the west side stairway, making a right at the foot on 15th Avenue. and then curving around the base of the park until you intersect with Aloha Avenue, which soon merges with Lomita Avenue.

10. Once Lawton is reached, cross the street, and immediately go down the 15th Avenue Steps Park, enjoying the views of the De Young Museum tower and the spires of St. Anne of the Sunset Catholic Church at Judah and Funston. At the last step turn left and go one block to the first of the hike’s two special visual ascents, the beautiful 148 mosaic tiled steps at 16th Ave (pictured above).

11. Once up to Lawton proceed south on 16th where you'll soon pass a house so pink that it makes its neighbor glow.

12. Upon reaching Moraga Street go left up the second set of tiled steps, like those on 16th Avenue, a recent community project.

13. Going right for a gradual descent on 15th you'll reach Mountain Lane for a climb up to Rocky Outcrop Park and then rejoin 14th.

14. At Ortega again descend via steps down to 15th continuing south to Pacheco, where Mandalay Lane calls to us for our last climb up to 14th.

15. Finish the hike one block south on Fanning Way from the starting point at Quintara Street.