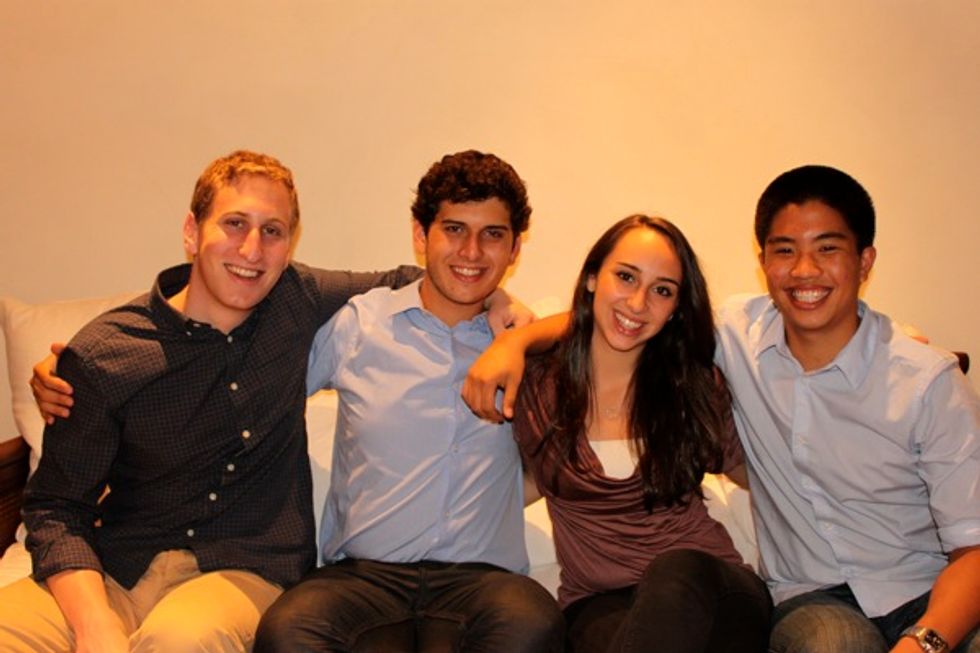 Student Team Builds TappMob, An App Their Parents (and Many Others) Will Appreciate

It’s common to hear the latest generation of entrepreneurs referred to as “kids,” but when it comes to TappMob, founders Eva Sasson and Justin Mardjuki may just have found a way to use that label to their competitive advantage.

Their first app, Check-in, which is expected to be approved by Apple soon, allows an iPhone user with one tap to “send your location to one person,” says Sasson, adding quickly, “like your parent.”

In fact, Mardjuki says, that’s what directly drove this pair of 2010 graduates from College Preparatory High School in Oakland to create TappMob, which won the people’s choice award at this summer’s MobileBeat conference.

“Growing up in the Bay Area you have to drive everywhere. Our parents would freak out – ‘Where are we? When are we coming home?’ Or, ‘Where should we pick you up?’ Well, we’ve created an app to communicate with our parents easier. Long conversations are unsafe when driving.”

The same app fits many other use cases, as well, of course, which is not lost on these 19-year-old co-founders.

In late March this year, as they were completing their freshman year of college (she at Columbia, he was Pennsylvania), “We found that there not many internship opportunities coming up for the summer,” Mardjuki says.  “We started TappMob as a summer experience to work on together.”

In the process, the first product they’ve developed is elegantly easy to use.

“Our UI is simple,” Mardjuki explains. “There’s just one big button to tap. Plus a slider bar at the top to slice through your contacts and tap your GPS coordinates so the recipient can see where you are on a map to be picked up or whatever.

“As we perfected this one-tap UI, it became the defining scheme for our company. If you think about it, 80 percent of the time you use an app the exact same way, and the other 20 percent are edge cases. As for adding in your contacts, it’s a one-time setup, then you never have to think about it again.”

Sasson expanded on the simplicity concept, quoting Albert Einstein: “Everything should be made as simple as possible, but not simpler.” But, as she notes, “To make something simple requires a lot of complicated work on the backend. So that the hard work doesn’t have to be on the consumer side.”

To build Check-in and two upcoming apps -- one for social media and one devoted to voice recording – the pair have recruited an ever-expanding team of fellow students, some of whom are paid and some who receive stock in the young venture as compensation.

Sasson says, “Our larger vision is that every app market will have some form of Tapp app. And by creating a nationwide group of students working on this we hope that usage will skyrocket. The possibilities are endless!”

All right, I was wondering, but how do a couple students attending demanding academic programs at Ivy League schools back east maintain a national network of colleagues and an office in San Francisco all at the same time.

“As for our team all being in college, that’s what it’s all about,” says Sasson. “I get asked all the time, ‘You must be so busy being in school and running a company?’ What they’re really asking is shouldn’t I quit school?

“The answer is 'No!' I’m not dropping out of school. Being in school is the most valuable thing for this company and for us. We’re students, we can be creative, we can bend the rules. We are actively recruiting other students. It will spread virally.”

“After all,” Mardjuki adds, “Computer science students learn how to program mobile apps in their first or second year of college now, whereas (older engineers) have to go back and learn how to do it. So there’s a big advantage to us being in school.”

But, he does allow that given the makeup of their workforce, there will be a “company-wide slowdown” whenever final exams roll around.