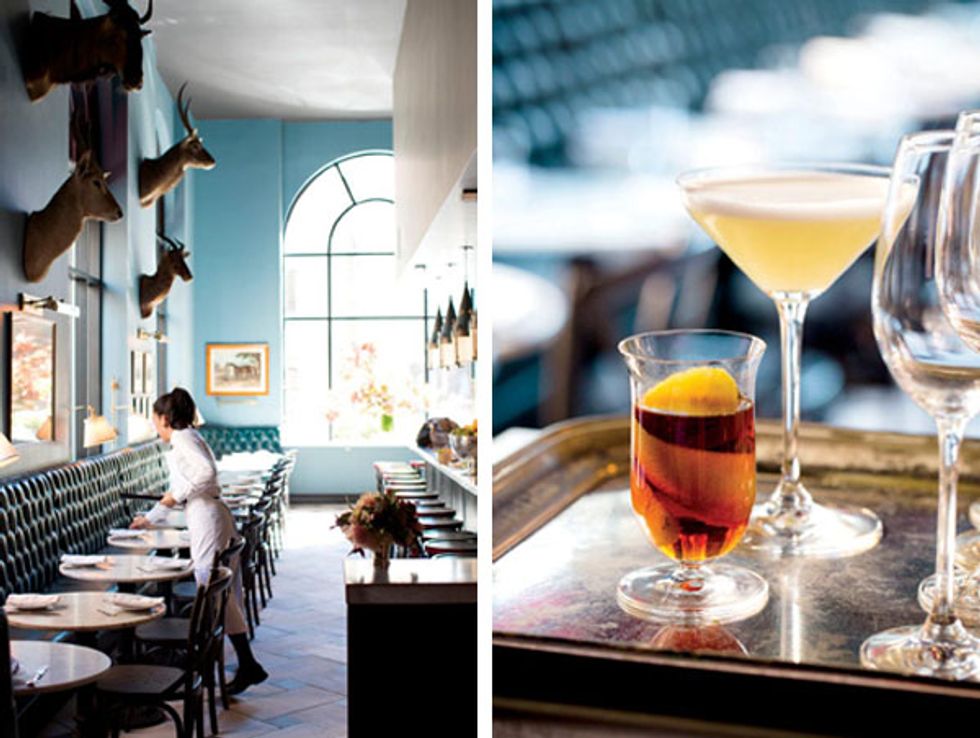 Suit Up For Modern Aristocratic Dining at The Cavalier

How could one not be galvanized (and stuffed) by a whirlwind tour of 50 brasseries, pubs, and watering holes in dapper London? Such was the trip that jump-started The Cavalier, the third team effort from Anna Weinberg, her husband, James Nicholas, and their chef-partner, Jennifer Puccio, who brought home plenty of ideas to inspire their space in SoMa’s new Hotel Zetta.

The menu is decadent, replete with ever-so-British items, such as lamb scrumpets (essentially a succulent lamb lollipop), hearty steak and oyster pie, light steamed pudding, and addictive thrice-cooked chips. And every nook and cranny is richly furnished by the master of interior pomp and circumstance, Ken Fulk.

Since its August opening, The Cavalier has been going gangbusters—no surprise to fans of its sister restaurants, Marlowe and Park Tavern. But it is here, in the ambitious all-day dining space adjacent to S&R Lounge, that the team has pulled out all the stops. Traces are long gone of the Thai noodle restaurant that once filled these walls.

An elegant appetizer, the prawns are served head-on in a striking silver gravy boat alongside traditional English Marie Rose sauce. The steak and oyster pie, with beef cheek, a savory crust topped with a raw oyster, and a broth that’s nearly black, may be the most decadent potpie known to San Francisco.

In its stead, Fulk has created a multifaceted Anglophile experience, where four distinct dining areas denote the mood and meal. Breakfast will be served in tufted peacock-blue banquettes, beneath taxidermied heads and vintage lanterns, in the sunny Blue Bar; come nightfall, the White Lady cocktail (Anchor Distilling Junipero gin, Creole shrub, lemon) makes for an elegant escort at the zinc-topped bar. The King and Queen’s booths in the main dining room, and the semiprivate Wine Stables with a hand-painted hunting scene, provide the requisite sniff of nobility. The Rail Car, with its antique brass luggage racks, which appear to be plucked from the Orient Express, is the last stop. That is, unless you’ve been invited into Marianne’s, a members-only lounge whose perfectly tattered velvet trappings and curiosities are a nod to the Rolling Stones’ Beggars Banquet album art.

You’re just as likely to spot a tech CEO as you are an NBA player in the boisterous main dining room. While much of the menu leans hearty, the soon-to-be famous Cavalier salad (vegetables, greens, aged goat cheese, truffled vinaigrette) and nutty farro and roasted beets are the sleeper hits sure to brighten a meal.

It’s been ages since a restaurant put this much care, cohesion, and spirit into a space. And as Champagne corks pop against the thunderous rumble of “Paint It Black,” the excitement is palpable. It’s as though our long pent-up taste for indulgence has been liberated at last. Ironic, isn’t it, that we have the Brits to thank.