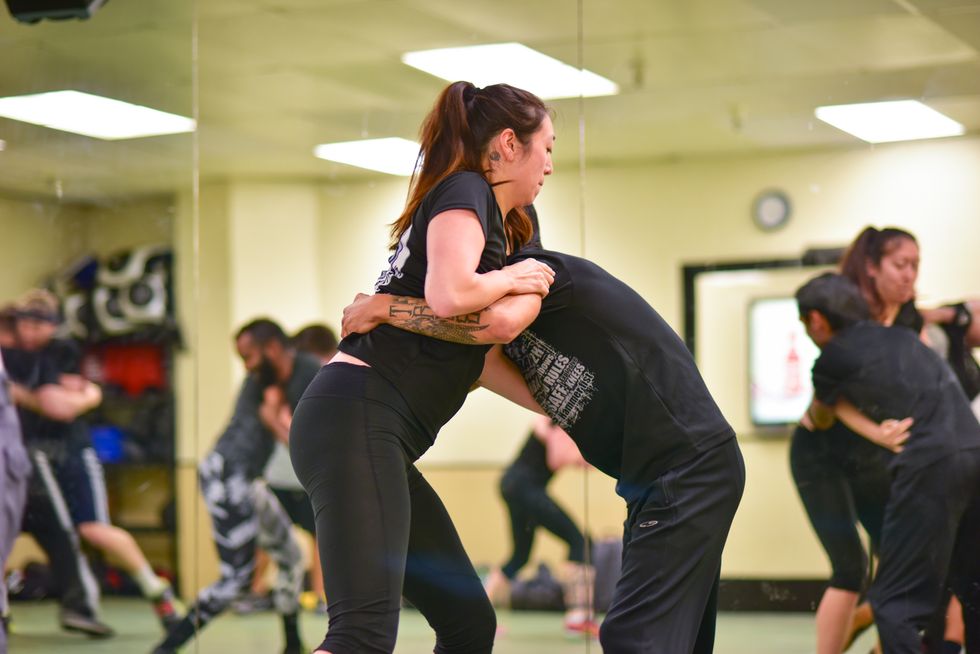 Sweat SF: Everything You Need to Know About Krav Maga San Francisco

Barny Foland and his team at Krav Maga San Francisco will fight for you. Literally. Since 1999, the Bay Area studio has taught the world-renowned combat training system famously used by the Israeli Defense Forces and over 350 U.S. law-enforcement agencies, focusing on personal safety and fitness.

“Krav Maga is a high-energy, effective self defense and fitness system,” co-owner Gail Foland explains. “It teaches easy to learn, simple movements that will enhance your instinctive responses if your personal safety is threatened." A complete full-body workout designed for people of all ages and fitness levels to build confidence, learn self-defense, and to protect themselves when attacked—it was clear we were going to be coming away with a lot more than just sore muscles after our class.

Inner Richmond resident Heddi Cundle has been taking classes at Krav Maga San Francisco since 2007. “My dad learned Krav during his first time in Israel with the IDF when he was in his 20’s. He taught me basic techniques when I was a teenager, and I loved the logic of using your strongest limbs against an attackers weakest,” she smiles. Upon first glance, you would never guess the tall, toned, bubbling Heddi is a bad ass. Former model? Sure. But training at Level 4 in Krav? No way would you guess that. “Krav is based on the fastest, rational method to get away from an attacker, the techniques brilliantly obliterate fluff and nonsense. It's not a game or a sport. It's a way of life and protection. Combining Krav with the other classes I take at the studio like TRX, Conditioning, and KO Bag [a full class dedicated to working the heavy bags], I use all my muscles excessively so the aches & bruises are worth it, and afterwards you deserve a cocktail.”

Admittedly, a cocktail was the last thing on our minds walking into our Krav 1 introductory class Sunday morning. The impressive, two-floor, 12,000 square foot studio is humbling, and you get the feeling that serious work gets put in by those who cross its threshold. When Gail gave us the tour through the multiple classrooms and gym spaces, including their official CrossFit “Box”, an instructor from the earlier class leapt from one room to the next, offering a modest “[I] forgot my knife,” as he smiled, waiving a black plastic knife. What I had I gotten myself into?

“We prioritize providing unconditional support and challenge participants mentally and physically in a non-judgmental and fun environment,” Gail reassured me. “The biggest difference between Krav Maga classes and going to a typical gym is that besides getting a great workout, you are learning a skill that you can use for the rest of your life.”

Our class had started much like any typical boot camp, warm up running drills, squats, sit-ups, planks, etc. When our instructor Rick explained the “Three F’s” of “Flight, Fight, Never Freeze,” I sensed the familiar part of class had ended. When he followed that up with a casual “Let’s hit some stuff”, it was official. I’ve entered a whole new ballgame.

First up? Groin kicks. Lots of groin kicks. After a quick tutorial on form by Rick and Matt, I made a few tentative swings of my leg toward the bag my fiancé trustingly held at a 45-degree angle away from his most vulnerable of areas.  Next came elbow strikes, followed by learning to escape when being grabbed from behind. Each skill is taught methodically, and drilled first in front of a mirror and then with a partner. The attentiveness and respect of the entire class was palpable, as you have to be prepared and focused throughout each drill for everyone’s safety. Though there was a collective laugh when one of the regulars in our class went to grab his cup for additional protection. Not his first “groin kick day”, apparently. Towards the end of class in our grand finale, Rick and Matt applied everything we had learned that day into a real-life scenario. After only one hour of training, I was amazed by how seamless it was for me to escape from someone’s grasp, deliver a kick, then follow up with elbows before another class member grabbed me from behind and I had to repeat the process again. When the final drill ended, our bodies were exhausted, our minds sharper, and felt a little bit like bad-asses!

- Bring water, a towel, and your best "back off" face! (cup optional)