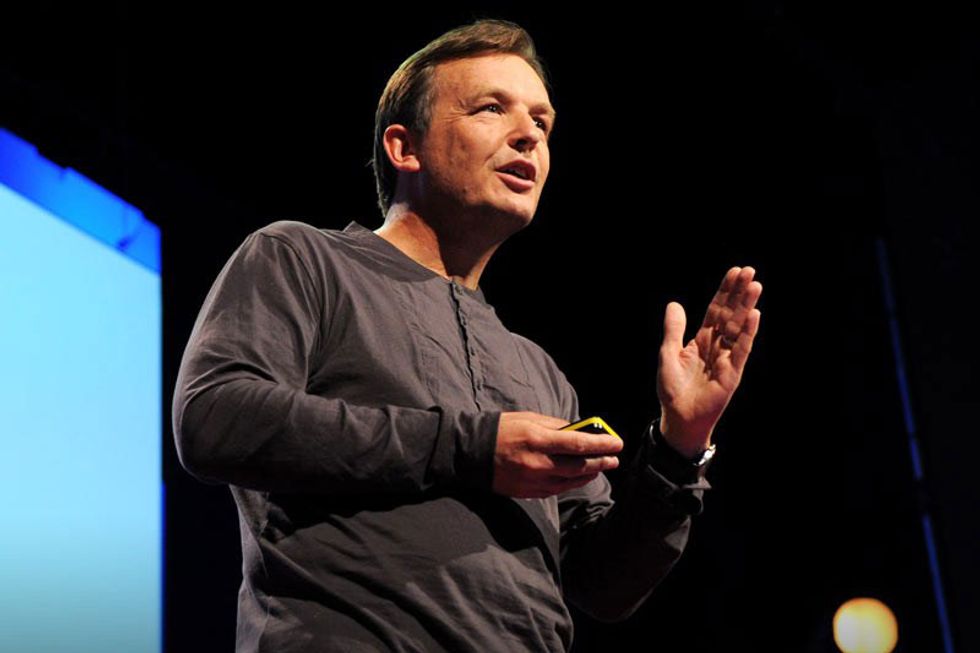 If anyone knows how to captivate an audience, it's Chris Anderson who, for the past 15 years as the curator of TED, has ushered some of the world’s best and brightest minds onto a stage set to send their insights into an online viral frenzy.

Now, Anderson is sharing some observations and learnings in a new book, TED Talks: The Official TED Guide to Public Speaking, which he'll be in the Bay Area to promote May 10th through 12th. Prior to his arrival, we got the inside track on his experience as curator of the world's top lecture series, as well as his tips for how to win over an audience.

Chris Anderson: When we first did our experiment with putting six talks online, back in 2006, we branded them TED Talks, which has a nice sort of oomph to it. I guess it stuck.

How do you select speakers for TED events?

We get about 10,000 suggestions a year from the public. The majority of talks are ones where we’ve sought someone out, but sometimes people write in and say, 'Hey, I’ve just done this, do you think I could share this on the TED stage?' Occasionally, those are wonderful surprises.

Do you have any advice for people who are nervous about public speaking?

People are right to be nervous in a way. The key is to use your nerves and your fear—it’s there to motivate you. The mistake is to think that [public speaking] is just a natural talent that people have or don’t have. Anyone who can meet friends at a dinner and share a story about what they’ve recently done can speak in public.

TED Talks must be 18 minutes or less. How do you keep them short?

That’s the key to giving yourself a chance—to make sure the scope isn’t too broad. For all TED speakers, one of the first things you have to do is slash parts of your work that you’re proud of; that you’d love to share if you could. It’s tricky. People who know something forget what it’s like not to know something, so often speakers aren’t the best judges of what is actually most interesting about what they’re doing.

Don’t go into it thinking it’s about you. As soon as people get a sense that a person has a bit of an ego, they switch off. They feel they’re being taken advantage of. The number one task of a speaker is to give a gift—an idea that will be valuable to the people who are listening.

What are some of the most memorable presentation tools you've seen used in a TED talk?

The two most famous are probably Jill Bolte Taylor bringing a human brain on stage and Bill Gates releasing mosquitos into the audience. Recently, Latif Nasser brought a live camel on stage. It was just wonderful.

TED’s motto is “ideas worth sharing.” What are some of the most meaningful ideas you’ve seen shared through TED?

I loved Dan Pallota’s talk around how we think about charities and nonprofits. In 18 minutes, he changed a lot of people’s minds just by blistering logic and rhetoric. In the last TED, Dalia Mogahed gave a mind-shifting talk just by being who she was and describing Islam in a way people probably hadn’t heard. You couldn’t watch that and then go away and think what you thought before about Muslims. That sort of mind shift in just a few minutes gets me quite excited.

Do you have favorites?

There are hundreds that I’d call favorites. Tim Urban’s talk on procrastination was its own kind of masterpiece. He opened up his mind in way that was not only supremely insightful, but absolutely hilarious. On a slightly different note, there’s the talk by Hugh Evans making a case for global citizenship. It’s an idea I think is powerful. I like talks that persuade people to see the world differently.

Of the 2,000 talks that have been posted online, how many do you think the average person can remember?

Everyone’s different. The things that are right for you in that moment you may remember forever, but I don’t think anyone is going to remember every detail of lots and lots of talks. The reasons ideas matter is that a really good idea, expressed properly, can literally change your worldview and impact your behavior years into the future.

Who are some of the most amazing people you've met through TED?

I have a secret passion for science, so I was very excited to meet David Deutsch, who is a reclusive British physicist. I just love how his mind works. One of his books is one of the reasons why I bought TED in the first place. Steven Pinker was also very influential to me. His book How the Mind Works blew me away. Having a chance to meet him in real life was very exciting.

Why this book, and why now?

There’s something of a public speaking renaissance happening, largely because of the ability to amplify your talk over the Internet. A single talk might possibly reach thousands or millions of people, so people are more motivated now to be successful at public speaking than ever before.

//  Chris Anderson will make three Bay Area appearances in May 2016: on Tues. May 10 at Berkeley Arts & Letters, the Hillside Club (Berkeley), berkeleyarts.org; on Weds. May 11 at Commonwealth Club, Cubberley Theatre (Palo Alto), commonwealthclub.org; and on Thurs. May 12 at Books Inc. at Opera Plaza (San Francisco),& booksinc.net.