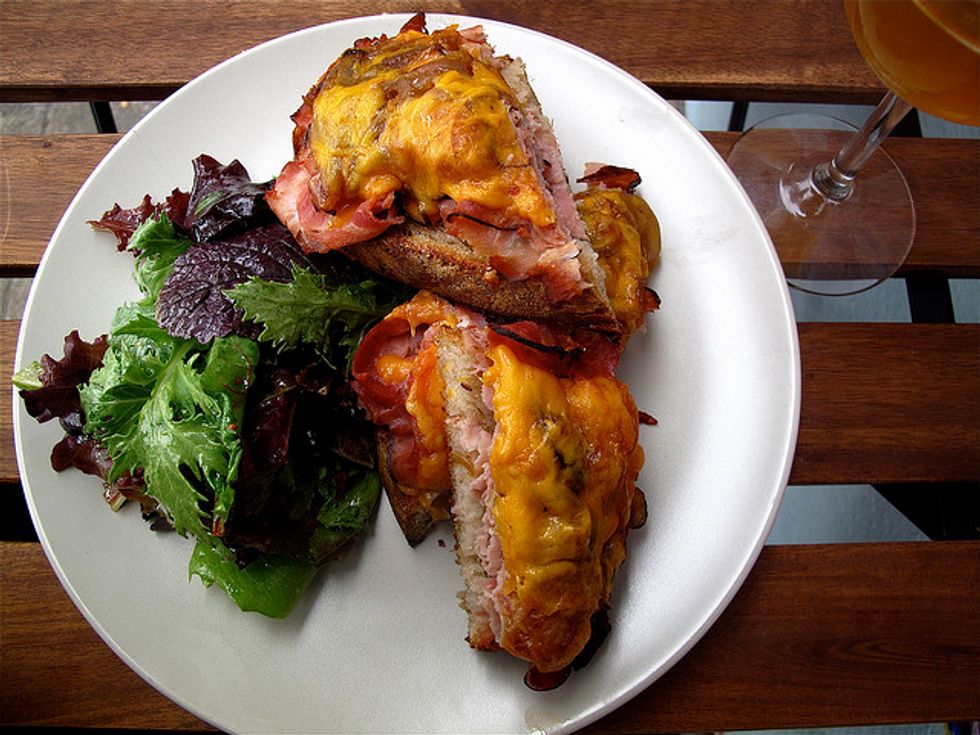 The 10 Best Dishes Under $10 in the Outer Sunset

Last fall, we published the 10 Best Lunches Under $10 in Union Square. It was so popular, we decided to do it with every neighborhood. Rather than attack this subject as outsiders, we're approaching "hyperlocal" dwellers from each 'hood to give us their picks — in this case Ocean Beach Bulletin Associate Editor (and 7x7 contributor) Mark Lukach and departing GizmodoEditor Brian Lam, surfing buddies who both call the Outer Sunset home.

Here's what they picked for their 'hood's best cheap eats. Check out 10 Under $10s from other SF neighborhoods here.

Outerlands is an Outer Sunset staple — its jumbo slices of homemade bread and reclaimed wood decor are worth making the trek out here. Their turkey sandwich (the turkey goes really well on their fantastic bread) is hearty, filling and just $8. There's always a line, so I'd recommend getting a coffee from Trouble Coffee down the street before your seat is called. $8. 4001 Judah Street, 415-661-6140

This neighborhood newcomer is already getting a lot of people excited. The breakfast sandwich is comprised of a housemade biscuit, a fresh scrambled egg, a big smokey piece of bacon and two slices of cheddar. I eat one and I'm not hungry 'til dinner. $6. 3876 Noriega Street,  415-683-5533

3. The Shrimp and Steak Burrito from La Playa Taqueria.

The Outer Sunset's got nothing on burritos compared to the Mission, but there's something about this spot that makes it the best in the neighborhood. It's close to the beach and has short waits, plus great pictures of waves in Mexico lacquered to the counters. 90% of my trips to La Playa are barefoot, my hair still wet from surfing. The shrimp and steak for $7 is one of my favorite post-surf meals.  $7. 3817 Noriega Street, 415-681-2007

4. Any Pizza from the Pizza Place on Noriega

This place is mostly awesome because of its vibe. For $7 you can get a half dozen of their very tasty buffalo wings, and in the pizza department, a huge slice with toppings adds up to about $4. Their trademark pizzas, like the Meathead, Rotten Robby and Timmy's Pie, are all top notch. 3901 Noriega Street, 415-759-5752

Some of the gnarliest dumplings in town can be found here, and you can even get them frozen to take home. I once walked in, short on time, and asked for one bag of every kind they had to go. $150 dollars and 6 months later, I ate them all. The pork and corn dumplings and shanghai soup dumplings are great, but I like the spicy beef tendon, which is sort of a chewy, super savory dish with a bunch of cilantro on top. I generally order it for my white friends like Mark before telling them what it is, and they love it too much to be grossed out. $6, 1713 Taraval Street, 415-566-6143

The beef noodle soup in this place is pretty good but I usually get the five spice chicken noodle soup which is basically a chicken thigh, boneless, fried in a pan, sliced up and served next to a bowl of hot noodles. Let their noodles steep a bit, and stir em up with some hot sauce and hoisin sauce and have at it. $6.75 for the medium. You probably don't need the large.1816 Irving Street, 415-661-8869

8. A slab of Hammachi sashimi from Yum Yum Fish

I generally like my Chinese food prepped by Chinese people and my sushi prepped by a Japanese mom and pop but since this place doubles as a fish market, I like to stop in, grab a huge chunk of uni or hammachi and take it home to eat with a bowl of rice and some nori. Market Price. 2181 Irving Street. 415-566-6433

I took my father here and he loved this place. The thing that matters is that my dad grew up and lives in Hong Kong. The salt and pepper rock cod is pretty great, but I've eaten it so many times I'm not sure I can do it again. Thankfully the whole menu is pretty good, including the Lobster Noodles and fried chicken. $7. 3060 Taraval Street. 415-681-2899

There are cheaper places to get crab in the city but no place has garlic noodles that will stay on your breath for three days. Delicious, but pretty much the most nightmarish setting for a first date possible given the potency of the noodles. $9.50. 4101 Judah Street, 415-665-1146