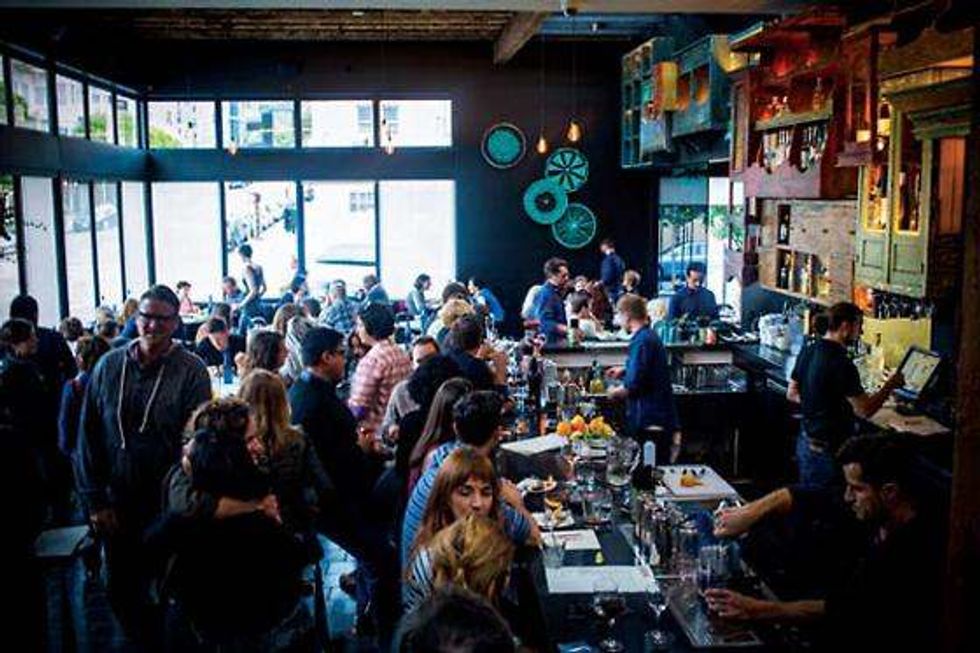 The 10 Biggest Restaurant and Bar Openings of 2013

It's been an exciting year for the bar and restaurant scene, with over a dozen notable restaurants and cocktail spots debuting (more than one a month) as the city's economy has seen an unprecedented, fast-paced boom. It was a year of instant successes and new neighborhood gems, but also one that kept S.F.'s chefs making national headlines.

This was no 2010 in terms of the sheer volume of great new spots, but food writers like me were kept much busier than last year, particularly in the second half of the year photographing openings, testing out drinks, and figuring out which new burger or roast chicken was most worth your calories.

Some cool, smaller, neighborhood spots like 1601 Bar & Kitchen, Padrecito, Nico, and Beer Hall snuck onto the scene in 2013, but the list below represents what I'd call the biggest and/or most notable, and the places you should hurry over to if you haven't already. Also, I should note that two of the entries below are technically revamps or reopenings, Fog City and Tosca, however they're included here because they're both entirely new restaurants than what preceded them (and Tosca wasn't even a restaurant before). And Saison would certainly fall under the category of significant openings, after it moved to its new SoMa location late last year, but the spirit and style of the place is just as terrific as it was in the former location, so it didn't count as really new to me.

Now, because it's that time of year, the list:

The spinoff bar project from Range cocktail man Jeff Lyon and Range chef-owner Phil West just came in under the wire, opening the second week of December, bringing a great new drinking option to the wilds of Dogpatch. The cocktail list, anchored by the eponymous Third Rail (a gussied up bourbon sour), is as good as everyone's come to expect from Lyon, with options ranging from light aperitifs to spiritous, wintry libations like the Mt. Tam, with St. George Terroir gin, Dolin sweet vermouth, and Gran Classico bitter. And West is making an awesome and cocktail-friendly selection of meat jerkeys that shouldn't be missed. 628 20th Street at Third

Chef and restaurateur Daniel Patterson and chef Yoni Levy also just eked out a 2013 opening, sneaking open with this new Mid-Market spot in the first week of December. In addition to bringing a daylight ice cream parlor to the neighborhood (dubbed The Malted, and sharing space with the restaurant), Patterson is hoping to replicate some of the success of Plum and Haven in Oakland in S.F.'s most rapidly gentrifying neighborhood. See some photos and the menu here. 1420 Market Street between 10th and 11th

Fans have been quietly, patiently waiting for years for Manka's chef-owners Margaret Grade and Daniel DeLong to start cooking for the public again, following the 2006 fire that destroyed their lodge and restaurant in Inverness. Last year they took over the Olema Inn, rechristening the dining room this past spring as Sir & Star, and beginning to do again what they do best: Serve carefully made, uncomplicated, and incredibly delicious California food, inspired by the bounty of West Marin. Go there for a romantic getaway, or just to try some fantastic fire-roasted crab, fish, or perfectly prepared roast chicken. 10000 Sir Francis Drake Blvd., Olema

I'll say I was a little skeptical, following the disappointment of another high-end, London-based, Asian chain concept that debuted last year (Hakkasan), about the coming of Roka Akor. But the London-based sushi-and-robata concept with a high-end bar turned out to be just what downtown was missing, complete with a cozy bar downstairs helmed by Alembic vet Daniel Hyatt. Chef Roman Petry put together a fun and easy-going menu, throwing together things like uni and chicharrones, and dressing a lobster-like Madagascan tiger prawn with yuzu, chili and lemon. And sushi chef Mike Lim is doing fanciful, lavish sashimi presentations befitting any big night out.  801 Montgomery Street at Jackson

Chef-owner James Syhabout set out to show the public how amazing the staff meals are at his Michelin-starred Oakland restaurant Commis, and he succeeded with this killer new spot in Rockridge. Yes, pretty much everything is a gut bomb on the current menu, from the blood sausage poutine to the fried chicken with oyster mayo to the ribeye topped with escargot, but it's all delicious and I'm looking forward to seeing they do with spring and summer produce. Definitely the hottest ticket in Oakland right now. 5912 College Avenue, Oakand

The redesign certainly helps at the former Fog City Diner at Battery and Embarcadero, replacing all the chrome and kitsch with warm woods. But it's chef Bruce Hill (Bix, Picco, Zero Zero) who worked his magic here to turn this tourist-friendly spot into a worthy waterfront destination for the rest of us -- hearkening back to the days when Cindy Pawlcyn originally turned it into a hot spot in the 80s. Expect stellar wood-oven-roasted chicken, great steaks, roasted fish, and the like, but also find some inventive surprises, like roasted carrots topped with mole, and French fries reimagined with furikake seasoning. 1300 Battery at the Embarcadero

It's always exciting in a town as steeped in food as this one to find something wholly new, and this year it was La Urbana's fanciful, ultra-modern take on Mexican flavors, in the style of contemporary Mexico City hot spots. I loved everything from the chili-foamed oysters to the short ribs with tomatillo salsa and Jerusalem artichokes, and where else in town can you sample from a selection of five dozen mezcals (and counting)? 661 Divisadero at Grove

The Acquerello team hit it out of the park with this sleek new Russian Hill spot. The menu is entirely eclectic in all the right ways, mixing flavors from Asia, Italy, and Latin America with confidence and skill -- don't miss the uni pasta, the fried duck sandwich, or the lobster ceviche. But it's the combination of that menu, the airy design, reasonable prices, good service, and great wine and cocktails that really make this place feel like an instant mainstay. 1760 Polk Street at

It opened all the way back in the beginning of January, but certainly Trick Dog counts as one of the big success stories of the year. They bear the honor of being the first cocktail bar to garner three stars from Michael Bauer, albeit in part because of a tight food menu to accompany those cocktails (kale salad! in a bar!), and they've already landed on several national lists. But what will keep me going back are the team's inspired, always unique drinks, which look to be on a schedule of semi-annual changeups. Don't miss the eponymous Trick Dog -- a ultra-delicious cheeseburger shaped like a hot dog -- the Scotch egg, or any of awesome and quickly served bottled cocktails. 3010 20th Street at Florida

Easily the most buzzed about and legitimately exciting opening of 2013 is chef April Bloomfield and partner Ken Friedman's thoughtful revamp of Tosca. Had this thing gone wrong, they would never have heard the end of it from the local press or the North Beach faithful. But it's a testament to both of their talents, honed in the far less forgiving arena of New York dining, that they got everything right. Barman Isaac Shumway's cocktails are always on point, leaning toward the classics you might have found at Tosca had they ever had a serious bar program (they didn't). The pasta selection is set to grow in the coming months, but as it is you shouldn't miss the delicious bucatini with tomato and guanciale (Bloomfield's take on Amatriciana), and the shareable entrees like the short ribs and roast chicken are stellar too. And by god I can't say enough about how great those off-menu meatballs are. You will probably need two orders. But it's the residual warmth and allure of the space itself that couldn't be lost, and wasn't -- leaving the place an air that's both comfortingly nostalgic and buzzing with new life all at once. 242 Columbus Avenue near Broadway