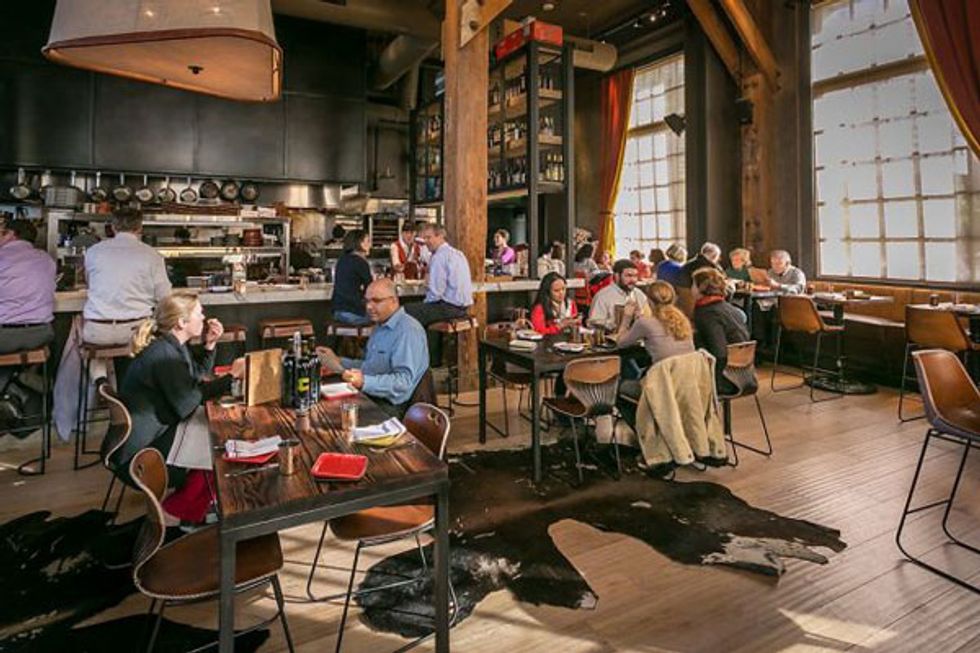 San Francisco has always been a great eating town. From the days of cioppino and hangtown fry to the advent of California Cuisine in the 1970s and 80s, no one can deny that this is one of the nation's premiere food cities. But chefs and critics alike noted a slump in the last decade, citing the pervasive influence of Chez Panisse and noting that the specific style of Cal-Mediterranean had gone stale 20 years since Alice Waters' restaurant rose to prominence. Since 2009 however, there's been a restaurant boom that mirrors the area's economic prosperity, and in the past five years, our food landscape has been remarkably changed for the better.

Just four years ago, New York chef David Chang caused a stir with his remark that SF food is all about "serving figs on a plate." It's as if Bay Area chefs took those as fighting words worthy of a full-court culinary press. GQ critic Alan Richman, who once famously wrote, "Alice Waters and sourdough bread aside, the Bay Area has contributed surprisingly little to the culinary ripening of America," changed his tune completely by 2011 after witnessing the spate of stellar openings in 2010. In a piece titled "I [Heart] SF" Richman wrote, "New York hasn't had much of a century once you get past David Chang... At each moment in history, there's a city or region that chefs have to visit to learn what's going on in American cooking... Right now it's San Francisco, where restaurants of ambition and imagination are opening."

Some of the restaurants Richman noted then are in the list below, and in the three years since we've seen San Francisco's profile in the culinary landscape rise even higher, national accolades and all. You can say what you will about LA catching up and having a boom of their own, but the quality and originality of what you find down there still can't touch SF.

Though it was hard to whittle this down to only ten, and many more spots have contributed to our wealth of eating delights (including places that opened before 2009 and had significant chef-driven makeovers like Bar Tartine and SPQR), these are the ten restauarants that have either made the biggest splash or struck the most original notes with their respective menus, and the ten most likely to live on well into the next decade.

In a city where molecular gastronomy was considered practically a sacrilege, chef Dominique Crenn boldly created a temple to the kind of food most notably absent from San Francisco's scene in 2011. By last year, her innovative, painterly, "poetic culinaria," drawing on influences from across the European fine-dining landscape – as well as that of pastry chef Juan Contreras, which has figured prominently in every review of the restaurant – earned the spot two Michelin stars, making it one of three restaurants on this list to have entered this elite club. Dish by dish Crenn is convincing the Bay Area that the kitchen-magic tricks of El Bulli and Alinea are just as important, and exciting, as beautiful ingredients.

The hype around chef Corey Lee's departure from The French Laundry, after three years as chef de cuisine, and his plans for a high-profile, Asian-focused fine dining restaurant was pretty huge in 2010. Luckily for him, the resulting restaurant did not disappoint, garnering two Michelin stars right out of the gate and landing Lee among Food & Wine's Best New Chefs. Lee's approach to the tasting menu, which melds influences from Japan and China with traditional Western techniques, has wowed diners ever since. (The "izakaya" course alone, with fried eel wrapped in feuille de brick with creme fraiche and lime zest, is worth a trip.) And the vibe in Benu is unlike anywhere else in the SF dining world – hushed, reverent, museum-like, and transportive –so much so you might even end up forgetting you're in a city where "casual" has always been paramount.

After three decades of cooking in Napa Valley and building a Napa-based brand for himself, chef Michael Chiarello decided to open his first San Francisco restaurant in 2013. The direction he chose, which he said reflected where most of his friends wanted to travel lately, was Spain, and despite being known as an Italian chef, Coqueta turned out to be more authentically and thoroughly Spanish than anyone expected. Stealing some front-of-house and bar staff from Jose Andres in D.C., Chiarello created a world-class destination on Pier 5 and earned a James Beard nod for Best New Restaurant. It's not every year that celebrity chefs of his caliber open restaurants here, and it's not every city where that chef actually sticks around and cooks as much as Chiarello has.

The magic of Frances is hard to pinpoint, but in terms of buzz it didn't hurt that the restaurant had two New York Times features written about it in its first year, after opening in late 2009. The alchemic success of the place lies somewhere in the combination of its unassuming and cozy neighborhood feel, Melissa Perello's inventive flavor combinations, sophisticated palate, and impeccable skill, and service that is always thorough, relaxed, and flawless. Perello elevated and redefined the notion of a San Francisco neighborhood restaurant, and with a few bacon beignets and world-class soups – not to mention the innovative pay-for-what-you-drink house wine service – she built a destination spot completely devoid of pretense, and clearly one with staying power.

It had been over a decade since North Beach had a restaurant with the kind of bustling energy and instant crowds that Park Tavern achieved right after its debut in 2011. Restaurateur Anna Weinberg and chef Jennifer Puccio had a vision for a modern brasserie with good cocktails, a great burger, and the sort of boldly flavored, easy-to-love fare that had already won them fans at Marlowe, and it was a recipe for success. It's as much a weeknight standby as it is a celebration spot  – "birthday cake" and all – and more than any other restaurant it picks up where Stars left off in giving the city a big and stylish, all-purpose destination spot with food that doesn't have to try too hard to be satisfying.

Similar to Park Tavern, Prospect came along at a moment when the city had been missing the sort of huge, lively, casual American restaurant in the tradition of Stars. Chefs Nancy Oakes and Pamela Mozzola, with the help of opening chef Ravi Kapur and partner/manager Kathy King, created a proper successor to Boulevard aimed at a new generation of diner, with more adventurous food and all of Boulevard's polish and pomp. It's a place where expense accounts go to be spent, but also where every entree feels like special-occasion food, and the cocktails are always stellar. It also feels so established that it's hard to remember that just five years ago the city didn't have a restaurant of this scale, with this much life.

Easily the most impressive, inimitable, and extraordinary restaurant on this list, Saison also had one of the most modern and unlikely paths to success, beginning as a three-night-a-week pop-up in the back of the Stable Cafe in the Mission. They've graduated to nicer digs, with nicer dish- and glass- ware and a menu that now starts at around 20 courses, but the intense clarity and wonder of chef Joshua Skenes' food has remained a constant. The menu has always focused heavily on seafood, and the use of fire to coax subtle changes and intense flavors from ingredients, but more than anything, Skenes' dishes paint a picture of the Northern California landscape through a Japanese lens, from delicate, foraged herbs to raw uni, to perfectly cooked abalone. And with the help of sommelier and partner Mark Bright, Saison succeeds in being a new version of Michelin-two-starred fine dining, with Huey Lewis and Steely Dan on the stereo, a come-as-you-are dress code, and zero separation between the kitchen and dining areas. It is San Francisco's most expensive restaurant at the moment, deservedly so, and I can't think of any better place for SoMa's new tech wealth to get spent.

Co-chefs Teague Moriarty and Matt McNamara burst on the scene in 2010, amid a big year for SF restaurant openings, and quickly earned attention for their skillful, highly polished fine-dining chops. The small Nob Hill restaurant has been dubbed "the poor man's Saison," and four years in they still offer a menu of similar care and quality, with seven courses for $98. But they earn their place on this list for being so ambitious, despite their size, and for being one of the most respected among a group of restaurants that have opened these last five years that owe less to Chez Panisse than they do to the Michelin-honored temples of Europe and New York.

It's a well known fact that the most talked-about S.F. restaurant of the last two years is also one of the hardest to score a table at, inspiring reservation bots and plenty of excitable blog ink. But behind all that buzz is an incredibly inventive and unpretentious restaurant that showcases the range of chef Stuart Brioza's varied palate and skills. Yes, the dim-sum service structure is fun, but it's the flavors  – a lot of them Asian, inspired by Brioza's life in the Bay Area –  that make State Bird special. And winning the James Beard Award for Best New Restaurant in the country last year has given the nation's food tourists another reason to focus their attention here. Get in line one evening for a counter seat when you can get off work early, and you'll understand what all the fuss has been about.

Finally, last year brought one of the most high-profile openings in the country to SF, via New York-based celebrity chef-owner pair April Bloomfield and Ken Friedman. Bloomfield and Friedman found a stage commensurate with their stature in Tosca, and they brought a dusty San Francisco landmark back to life with a new kitchen, top-notch drinks, and new red leather on the old leatherette banquettes. The place has a worn-in glow, and a gravitas, that a new restaurant space can never mimic, and Bloomfield's thoroughly modern Italian menu is everything you want it to be, from the perfect foccaccia and delicious antipasti, to the roast chicken with marsala gravy and ricotta. And thankfully, Bloomfield and Friedman are doubling down on SF, with the upcoming makeover of the Lusty Lady as a cocktail spot. So, they're here to stay.