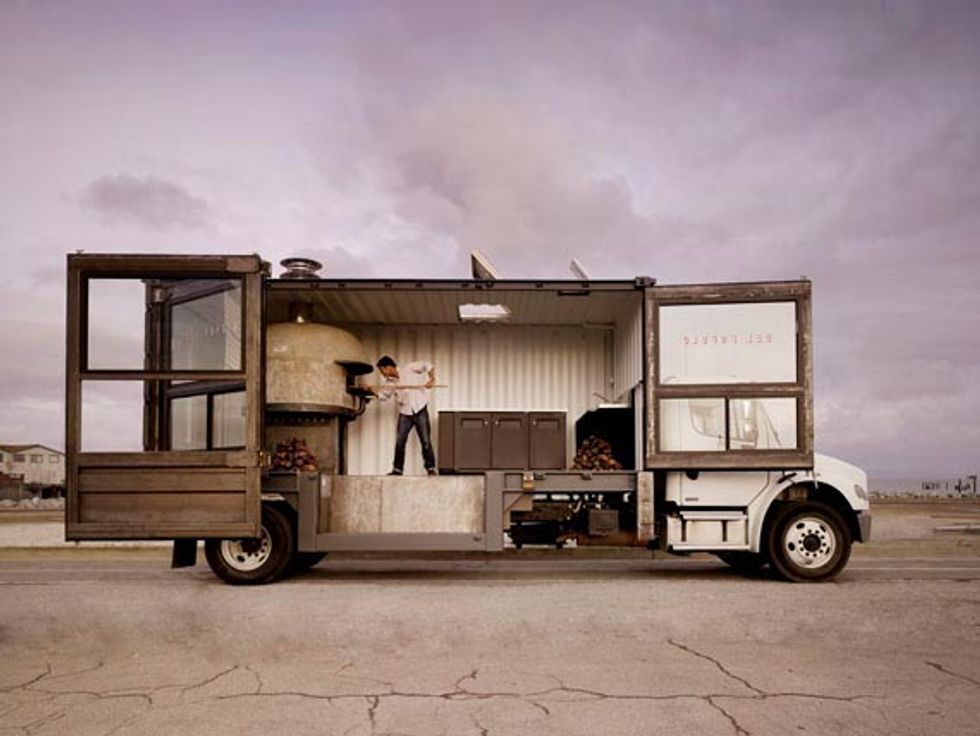 There’s only one possible reaction upon first seeing Jon Darsky’s pizza truck: Whoa. Hitched to a mighty rig that weighs 14 tons, Del Popolo begins serving Neapolitan pies this spring from its 5,000-pound oven. This much muscle comes at a cost—over $180,000 in all. The good news: Del Popolo is inimitable. “You’d have to be a fool to try and copy it,” says Darsky. “This thing was f*cking expensive.” Here, a few of the highlights.

$10,000
Only a heavy-duty truck like this one could support the two-and-a-half-ton, handmade, wood-burning oven from Stefano Ferrara in Naples. With a low dome, the oven maintains heat up to about 800 degrees for the perfect 60-second Neapolitan pizza. “I wanted a kick-ass oven and for people to be able to see it,” says the Noe Valley resident.

$50,000
Fabrication of Darsky’s vision didn’t come cheap—$85 an hour just for the labor. But with help from his mom and friends, he realized his dream. Complicated construction included demolition on the central shipping container to build the doors and a staircase, so Darsky can serve customers at eye level—a rare element for a food truck. “It’s an egalitarian way of serving,” he says. “Del Popolo means ‘of the people.’”

$80,000
The overall design and engineering, from the epic doors to the customized air suspension system, required five brains—Darsky’s plus four  designers. “This was way over my head,” he admits. “If my wife had been running the project, it would have been a lot smoother—and cheaper.”

$17,000
It’s a close race for what makes the former Flour + Water pizzaiolo geek out more: his pies or his truck. “I’ve learned a lot about the world of trucks,” he says, describing his “standard Freightliner bobtail” with the ease of a pro (the requisite commercial drivers license and registration cost an additional $2,000). “Because of that oven, I have this super heavy truck, and I’m the only one who can drive it.”

$10,000
The voyeuristic view to the inside of Del Popolo is simply stunning. The custom-made, half-inch-thick, residential-grade windows rang up at $10,000—and that’s just the glass. The steel tube and aluminum frame doors add to the bill. They open fully to a majestic wingspan of 39 feet.