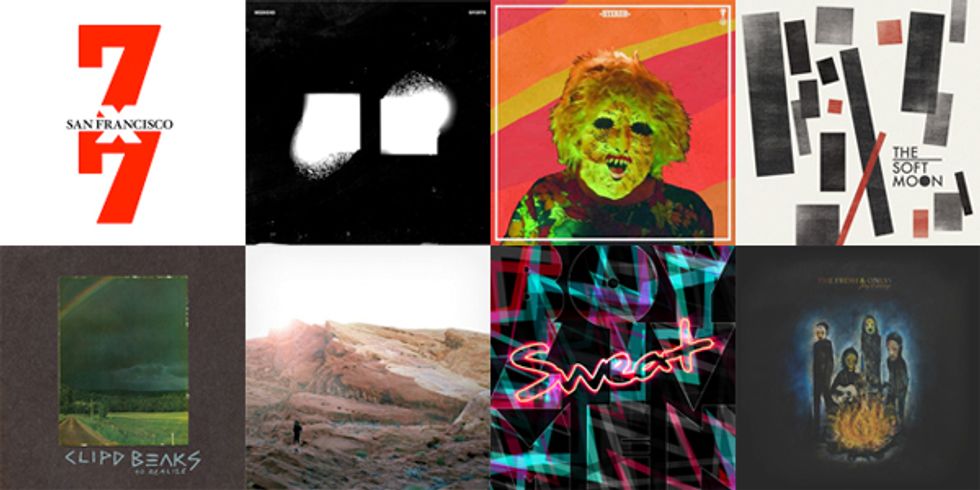 Not to diss 2009 or jinx 2011, but this was an unusually exciting and solid year for our bustling little music scene. As the notoriously NYC-biased Pitchfork recently put it, our fair city is "slowly threatening to eclipse Brooklyn in the ranks of regional talent." Hey-yo! Listed below are seven full length releases (sorry, Girls) from the year that particularly stood out to us, along with five additional LPs too good not to mention.

Weekend :: Sports
A consistent 7x7 favorite, Weekend blew just about everybody away this year with Sports, their debut full length on D.C. turned Oakland-based indie mainstay Slumberland. As we noted earlier this year, the trio's sound pays a certain homage to Psychocandy era Jesus & Mary Chain, with a similar knack for good songwriting and love for tinnitus-inducing feedback as the shoegaze pioneers – beneath the droning bass, deafening guitar and reverb-drenched vocals are endless moments of pure pop bliss. Just a little more than a year into their young careers, and Weekend appears to have already mastered the art of balancing noise with pop. We can't wait to see wait they have up their sleeves in 2011.

Ty Segall :: Melted
Another year, and another excellent release from local songwriter extraordinaire Ty Segall. Arguably his best effort to date, the 30-minute long Melted has the prolific Segall solidifying his role as the de facto lead purveyor of fuzzed-out '60s-influenced garage pop following the tragic death of the like-minded Memphis legend Jay Reatard. Segall seems to effortless spin off hook after hook after hook on the release, spending little time on the build up but plenty on the pay off -- it is shocking how much depth the 23-year-old can pack into tracks that rarely break the three minute marker.

The Soft Moon
:: Self Titled
It's a shame that The Soft Moon's stunning self-titled LP was not released until the tail end of this year -- had this been a summer or fall record, it would almost certainly be leading the charge on the ever ubiquitous national end of year lists. Released by New York tastemakers Captured Tracks, the debut from Lumerian's multi-instrumentalist Luis Vasquez features eleven haunting and hypnotic tracks that gracefully blur the line between kraut, psych and post-punk. A mesmerizing and all around enjoyable affair from start to finish.

Clipd Beaks :: To Realize
An unusually expansive and tension filled effort, the tribal drumming, throbbing bass lines and consistent hypnotic drone of To Realize – the sophomore LP from Oakland-by-way-of-Minneapolis trio Clipd Beaks – has rightfully earned endless comparisons to post-punk veterans Liar's classic Drums Not Dead. And just like the aforementioned 2006 release, the hour-long avant epic is not necessarily immediately digestible. This is the type of record to get lost in with your headphones on, exploring those hidden layers and unexpected moments that make it one of the more memorable experimental efforts of the year.

Tamaryn :: The Waves
One of the most hyped local releases of 2010, the lush debut LP from San Francsico-based duo Tamaryn has already earned a well-deserved spot on countless national best of year lists. Overflowing with nine beautifully crafted would-be singles, The Waves methodical production and clear focus on melody offers a refreshing break from the current wave of buzz bands who share the duo's love of reverb but lack Tamaryn's extensive musical vocabulary and clear mastery of all things pop. Along with Weekend'sSports, this record has done wonders to solidify San Francisco's role as a premiere breeding ground for more than just garage rock.

Boyz IV Men :: Sweat
Best known for their sweat drenched warehouse soirees, the Mission's favorite party band finally got around to releasing their first recorded material this past fall. While the album has generally been slept on by critics, the aptly titled Sweat has been the go-to party starter for us since it first dropped – packed with seven punk-inspired instrumental disco bangers, the drum and synth-heavy record is a welcome change of pace from the plethora of garage rock and shoegaze revivalist that have come to dominate the local indie scene (and subsequently, our year end list). Truth be told, Boyz IV Men are a band that will always work better live than on record – that said, Sweat does a remarkable job of capturing the raw energy that has made them an underground favorite.

The Fresh & Onlys :: Play It Strange
Having graced our pagesnumerous times over the past year, 7x7 readers are more than likely familiar with jangly local garage quartet The Fresh & Onlys. It is no secret then that 2010 has been the defining year for the psych-inspired act – their once often miss live performances are now nearly always hits, and their recently dropped LP blows away just about everything they have done before. And just to top things off, the uber-buzzed band recently landed the #29 spot on the coveted Pitchfork "Top 50 Albums of 2010" list – the online tastemakers went so far to say that "there's not a bad song" on the band's third LP in as many years. A fine addition to the growing list of San Francsico garage classics.

Agree? Disagree? Weigh in below.