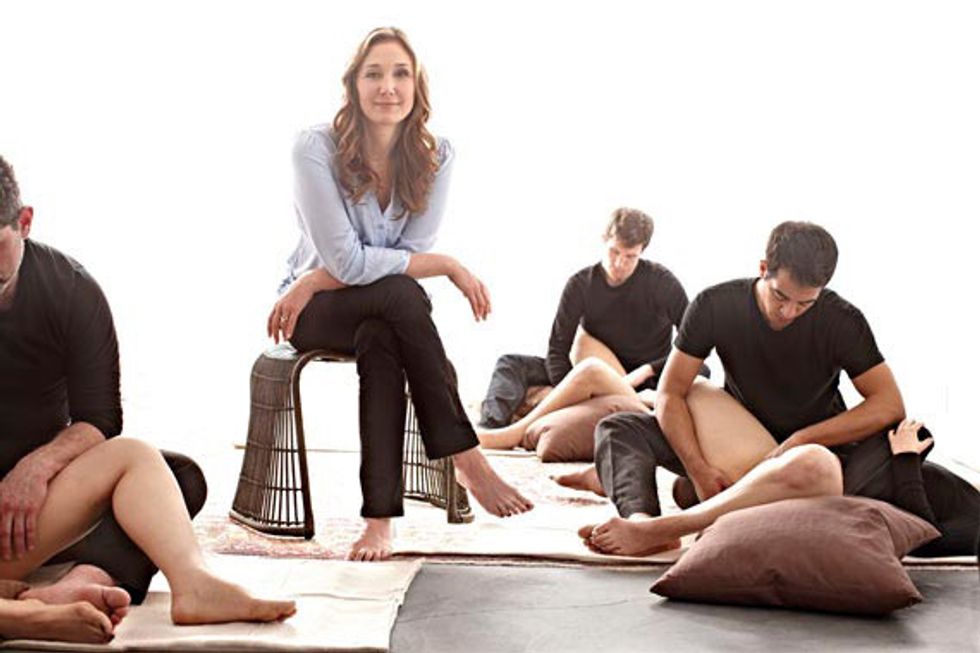 Men and women have been flocking to Nicole Daedone’s OneTaste in SoMa for her relationship, sexuality, and couples workshops for six years now. Some go on to the resident program and orgasmic meditation (OM) practice—more on that later. In May, she releases Slow Sex: The Art and Craft of the Female Orgasm, a guide to more intimate, even spiritual, sex.

Is slow sex about the time you put into it?
No, it’s three ingredients. The first is developing attention. Our minds get locked into this goal to have an orgasm, and we just go, go, go. The next is simplicity. Most of the techniques I’ve seen are all about adding stuff to your sex life. Slow sex is about stripping it down to pure sensation. Lastly, cultivating desire. When men ask women what they want, 98 percent of the time, they don’t know what to say. It’s like there’s a shame for desire. I remember the first time I gave a man instruction. You know, move a little to the left, try this, try that. I was afraid I was going to hurt his feelings, but I didn’t. It’s actually a noble thing to say what you want and how you want it, get it, and feel successful.

You recently launched a new site called The Turned On Woman. How is this different from past women’s movements?
It’s an extension of feminism. A lot of work’s been done already around equal rights. I’m interested in equal fulfillment. When a woman is fulfilled, everyone in her life will benefit, including men. Once she’s full, giving is natural and effortless for her. When you feel good, you want others to feel good. Work becomes joyous. The lights are on enough to see your purpose and desire.

In your classes, you sometimes talk about princesses and queens. Why use fairy tales?
In those stories, the man’s the savior, and the woman’s the damsel in distress. Men have a natural tendency to want to please women and make them full, but it takes a lot of patience. Years ago, I was caught in my own feminine princess story—an undeveloped sexuality that was insatiable and only wanted more. That kind of sexuality never gets full and never offers back out. But what if you’re the queen and the world is here for you? You have an obligation to admit your fullness and offer back out. That’s the threshold of becoming a woman: When you can admit fullness and give from that fullness because you feel worthy and deserving of love. That’s the most difficult part—to take the time to get full and then have the humbling experience of slowing down and receiving someone’s touch.

Is being turned-on a matter of pure, sexual pleasure, or is it more general?
A turned-on woman is someone who’s comfortable in her own body. She’s powerful and comfortable with her power. Everybody has the power I’m talking about. It’s like gravity—it just exists. Our power comes when we are fully who we are. Sex is just where most women block their power.

Where do orgasms come into play in this search for empowerment?
An orgasm gives you access to an involuntary state that’s usually blocked by all your thoughts. Say you’re sexing, and you’re about to go over the edge. There’s a period where you’re out of control, and you’re no longer having sex. Sex is having you. It’s like meditation, and suddenly you’re experiencing your true self. When women have sex from a place of being turned-on, sex as a whole changes. It’s then natural to explore a man’s orgasm organically. That’s why I focus on the female orgasm. Everything about his body and yours feels good, and there’s pleasure in making him feel good back. That’s why deep down, men want a woman to worship, a woman of power.

How many orgasms does it take for this kind of change to happen?
Orgasmic meditation 15 minutes a day, over a sustained period of time, can open up your sexuality. At OneTaste, we practice every morning. A woman lies down, and for 15 minutes, her partner massages a specific point while she concentrates on the sensations. Someone giving pure, clear attention to a woman’s orgasm makes you a little shaky. Our sexuality is so propped up by thoughts and fantasy. See what happens when you focus in on sensations instead of thoughts.

Why no love for the guys’ orgasms?
We’re so remedial in the arena of female sexuality. The work that needs to be done for a woman’s orgasm is so tiny and subtle. This is my way of balancing things out.