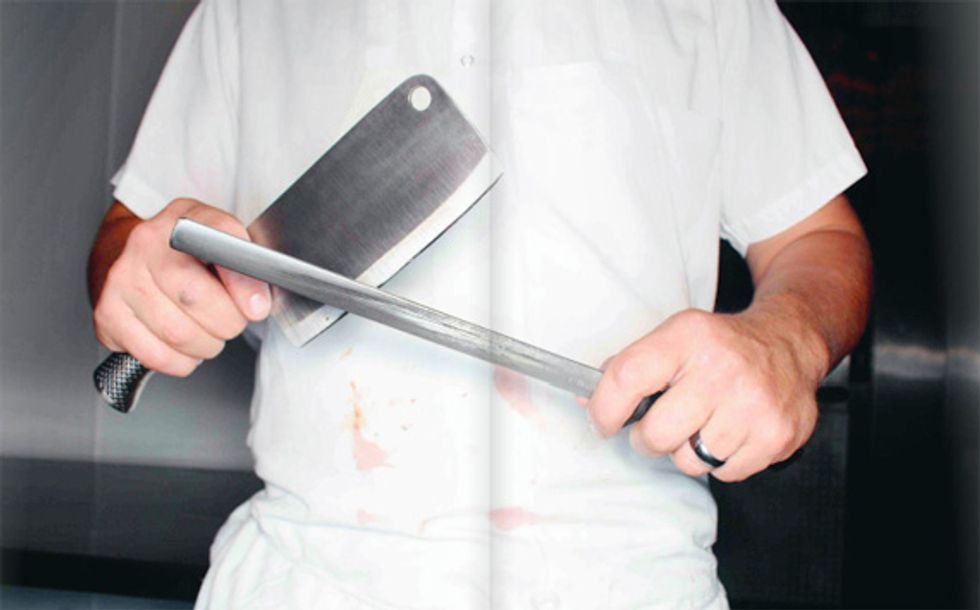 The Butcher's Guild: One of the First Support Groups for Ethically Minded Butchers

"Where's the beef from?" and "Is that grass-fed?" are common queries in the San Francisco food world. And with local offerings like 4505 Meats' meat-filled CSAs and things like pork happy hour at Fatted Calfin Hayes Valley, butchery practices are working their way even further into the city's vernacular. Now Avedano's Tia Harrison and Primal Cuts author Marissa Guggiana are taking things one step further wtih The Butcher's Guild, one of our country's first support groups for ethically-minded butchers. With local whole-animal advocates Ryan Farr and Chris Cosentino among the group's 23 charter members, The Guild is now reaching out to other members of the industry to expand its reach in the early going. Later this summer, they'll be recruiting lay people (i.e. meat geeks) as members.

When did you really see things start taking off with the revival of Butchery in SF?  Four or five years ago, local processors likeSonoma Direct [owned by the Guggiana family] and Marin Sun Farms had already started finding superb, honest, local products. We had sources for better meat in our restaurants and wanted to pass that on more directly to consumers. As a result, Tia opened Avedano's about 4 years ago, Meatpapermagazine launched in 2007. Restaurants like Chez Panisse have been looking to their source for many years, which gave the Bay Area a head start many years ago.

Why did you start The Guild? We grew up shopping at Foodmart anywhere as did everyone else in our generation. Michael Pollan says "If your grandparents wouldn't recognize it as food, don't eat it." Many of us don't even have food memories to tie back to what our grandparents would have eaten. So we are recreating the food system to provide those things. This lack of generational knowledge is one of the reasons we want to band butchers together.

What are the major issues you hope to address with The Guild? The industrial food system provides a lot of meat to a lot of people, for a low price. We feel that any system requires diversity to remain healthy, so we want to foster small businesses. This naturally creates a wealth of perspectives, as well as ranch lands, sources of local jobs and new profit models.

How do you hope to provide education for butchers?
Our first mandate is to create a network for butchers to help one another. We will nurture the conversation through The Butcher's Guild Bulletin, Meat Camp and our work as consultants. Classes and seminars will eventually develop, but first we just want our members to know how many resources exist at the other end of a phone.

Meat Camp? Meat Camp will be our first membership-wide gathering and will be a chance for everyone to put a face to a name. There will be all the opportunity a week can provide to do some focused, interactive "show and tell." Curing, tying, cooking, rendering and, of course, cutting.

Is this a nonprofit? For profit? We are a for-profit organization. We have put a lot of thought into this. The thing that I don't like in this country is this perception that if you are doing work for a greater cause that you should work "not for profit." Most of the smartest, most dedicated people we know in the food industry are burned out because they are involved in so many projects without any pay. We want our members to be successful and profitable because they are doing the right thing.

How will you increase visibility for existing butchers? We are approaching this from several angles. We have launched a national outreach to press and we are also sharing marketing tools for all of our members. Members will be listed on our site and we will be working to promote butchers in their area by developing stories with regional press outlets.

How are you reaching out to butchers to see if they want to become a part of this?  So far, we have been working with the many butchers we already know all over the country that we admire. We'll announce an open call for submissions in a few months.

Why would a non-butcher want to be a member of the Guild? Consumer members will have access to industry information. We know a lot of meat geeks that would love to hear how our members cure salami or braise a lamb shoulder. They will also get cool merch and invitations to events and publications.