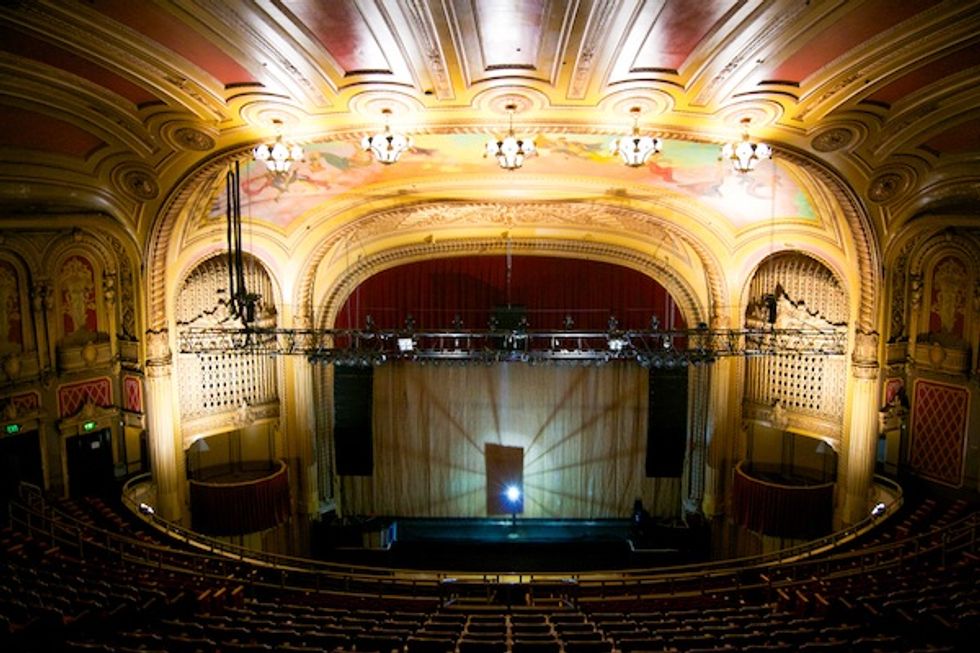 The Cinematic Saga of The Warfield

It’s a bit daunting to stand inside a massive, richly detailed theater when it’s empty. The spiraled balconies appear larger than ever, the busts lining the walls seem to stare, and the room’s grandeur feels entirely overwhelming. To experience the venue during a live show is almost a sensory overload. Therein lies the magic of San Francisco's historic Warfield.

The Market Street venue first opened on May 13, 1922 as the Loews Warfield vaudeville theater and cinema. Founder Marcus Loew (yep, that Loew) loved it so much that he named it after his San Francisco-born best friend, stage actor and partner David Warfield (whose real name was actually Wohlfield). It was the 300th theater in the Loews chain, but certainly not just another notch on their belt; arguably, it was the their beautiful one to date.

The building ran as a movie theater for over 70 years, showing stellar classics ranging from The Planet of the Apes to Gone With the Wind, and attracting such stars as Charlie Chaplin (who paid the theater numerous visits). Its mid-Market location proved so popular an area, in fact, that Al Capone rented a penthouse office space within the Warfield building (just prior to his Alcatraz imprisonment).

Before the Warfield became a full-time theater in the 1970s, the stage hosted musical and vaudeville acts, which proved popular with both tourists and locals. The building dripped with jazz-era glitz, welcoming some of the era's most famous performers — Al Jolson and Louis Armstrong, just to name a couple.

After decades of screening flicks, with the rare musical act, things changed in 1979. During that year, the Warfield housed Bob Dylan for 14 shows on his "Gospel Tour," and then again for 12 more in early 1980 when he started his "A Musical Retrospective Tour." Not long after, Jerry Garcia of the Grateful Dead became heavily involved with the venue.

Between 1980 and 1995, Garcia played a total of 125 concerts, both with his iconic band and as a solo act. As current house manager Larry Sykes puts it, “the Grateful Dead were pretty much the house band for some time.” On April 29, 1992, the day of the Rodney King riots in Los Angeles, Garcia convinced the management to bring in everyone on the street outside to watch the show. Generally, artists wouldn’t have that degree of power; then again, playing that many shows in one venue must have given him a bit of sway with the bosses.

Garcia was by no means the only major billing to grace the floorboards at the Warfield’s stage. As the venue proudly proclaims, “Everyone has played the Warfield.” It sure seems fitting, with an alumni list including James Brown, Tupac, David Bowie, U2, the Clash, Prince, and even large-scale productions of The Rocky Horror Picture Show. Thrash metal outfit Slayer recorded their popular War at the Warfield live DVD there in 2001. Bassist and vocalist Tom Araya said that even though the show’s audience wasn’t much different from other Slayer shows, “They get crazy [here], they tear the place up.” The DVD went on to attain certified gold status, selling over 70,000 copies.

There were many aurally historical moments made here as well as some killer lineups. "One was probably the first time we had the Pearl Jam/Nirvana/ Soundgarden lineup," manager Sykes says. But the legends were always a great show too. "Most of those Dylan and Garcia shows were electric," he says. "Maybe in a couple ways."

In 2005, the building was bought for $12 million and leased out to Goldenvoice, the company famous for organizing Coachella and other major festivals around California. Today, the Warfield brings in artists of massive caliber of all genres, from Cat Power to 2 Chainz to David Byrne. Most recently, Wu-Tang Clan headlined the Warfield, prompting the venue to cover up the W and A on the marquee and replace it with Wu’s classic yellow logo.

Perhaps the Warfield is best summed up by a closing remark made on stage by Jeff Tweedy of Wilco in 2012. He shouted to his audience, "We always have high expectations for you, San Francisco, and you never let us down."

You could certainly say the same thing for the Warfield.